New US envoy David Friedman presents credentials, gets to work

American ambassador says he was given mandate by Trump to aid Israel in any way possible. 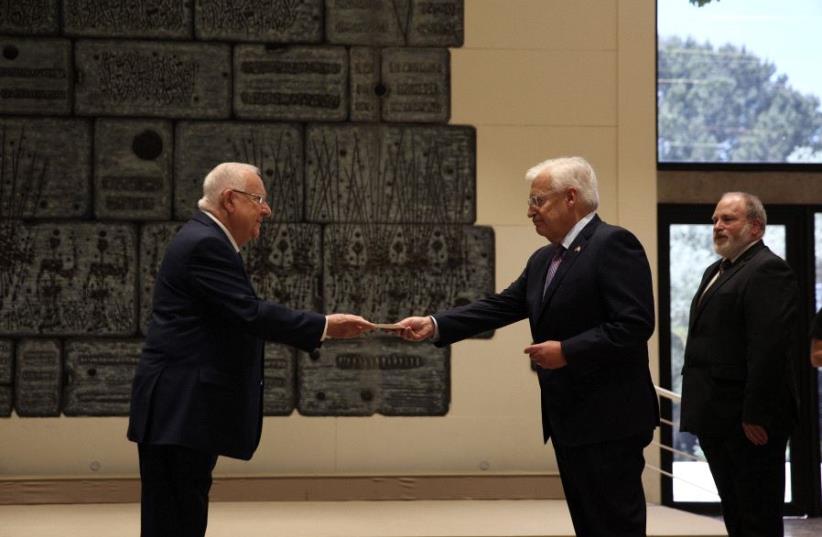 Friedman and Rivlin
(photo credit: NOAM RIVKIN-PANTON)
Advertisement
US Ambassador David Friedman was the last of three ambassadors on Tuesday who presented their credentials to President Reuven Rivlin The others were Penprapa Vongkovit of Thailand and Manuel Gomez-Acebo of Spain.
David Friedman sworn in as US ambassador to Israel (credit: US Embassy Tel Aviv Press)
Rivlin welcomed all three warmly, but was particularly enthusiastic in greeting Friedman, saying the shehecheyanu, the blessing of thanks for living to see the day, not part of the protocol for receiving credentials.But Israel makes all kinds of exceptions for America and Americans.It is rare for ambassadors to present credentials on the day following their arrival, another departure from the norm.Though he is Orthodox, Friedman came bareheaded to the President’s Residence.Rivlin said that while he knew Friedman had been to Israel many times, this time he came as ambassador of the United States of America, “Israel’s greatest ally.”Israel is eagerly awaiting the visit of President Donald Trump, Rivlin said, a “very important and sign of the unbreakable bond between the two countries.” Rivlin also commended America for its stand on the civil war in Syria, showing that there is a red line which cannot be crossed and referred to what Israel is doing to help wounded Syrians.
New US envoy to Israel kicks off appointment at Western Wall (credit: REUTERS)
Rivlin, a seventh-generation native, is fully aware of Friedman’s personal identification with Jerusalem, but spoke to him as an ambassador and not as a religious Jew, declaring that Jerusalem has been the capital of the Jewish people for 3,000 years, since the days of King David.Rivlin insisted it was time that the whole world recognized Jerusalem as the capital of Israel, .Friedman compared Rivlin to the “warrior poet” of 3,000 years ago, and said the president was following in the footsteps of King David.Friedman said serving as US ambassador was the greatest honor in his life, using the Hebrew term Medinat Yisrael for the State of Israel.Echoing Rivlin, he said that relations between the two countries were not only unbreakable “but without limits.”Friedman expressed gratitude to President Trump for the opportunity to serve in Israel and for having confidence in his abilities.Trump’s mandate, he said, had been “to support the State of Israel in every way and in all ways,” adding that Trump’s “commitment to the State of Israel is rock solid.”When leaving, Friedman signed the visitor’s book in Hebrew.Another departure from protocol was the invitation extended by Rivlin to two officials of Hazvi Yisrael Congregation in Jerusalem’s Talbiya neighborhood, where Rivlin occasionally attends services and where Friedman on previous visits also attended. When the media were asked to leave while Rivlin and Friedman had a private chat, the two synagogue officials were permitted to remain. Most of the conversation was taken up with mutual assurances of abiding friendship and solidarity between the two countries, plus frequent references by Rivlin to Jerusalem as the centuries old capital of the Jewish People.Earlier, Rivlin told Ambassador Vongkovit that he had recently been in Bangkok en route to Vietnam and had been received very nicely. He had previously been to Bangkok as speaker of the Knesset, a time when he stayed longer.Vongkovit expressed her country’s appreciation to Israel for permitting tens of thousands of Thai workers to find employment in Israel – primarily in agriculture. The know-how they acquire is something they take home with them, she said. Rivlin replied that Thai workers not only aid Israel’s agricultural output, but also its economy.In welcoming Ambassador Gomez-Acebo of Spain, Rivlin expressed thanks to King Felipe for what the Monarch is doing to fight the Boycott, Sanctions and Divestment movement.Friends can criticize each other from time to time, said Rivlin, “but BDS goes against a relationship.”He was also appreciative of what a series of Spanish prime ministers have attempted to do in the effort to build trust between Israelis and Palestinians.With regard to the latter, Rivlin said: “Unfortunately many are not willing to recognize us – not only as a Jewish state, but as a state at all.”Rivlin mentioned an official invitation to visit Spain he received, one he said he intended to accept toward the end of the year. “Half of us in Israel are Spanish,” said Rivlin. He then thanked Spain for introducing legislation that will grant citizenship to people who can prove their descent from Jews expelled from there at the end of the 15th century.Gomez-Acebo, in conveying the salutations of King Felipe, said that the monarch was looking forward to Rivlin’s visit.“But I’m of Ashkenazi origin,” Rivlin clarified. Gomez-Acebo laughed and promised, “There will be no discrimination.”In more serious vein, he said it was a tribute for an ambassador of Spain to meet descendants of his country in Israel. As for the restoration of citizenship, Gomez-Acebo said that was “a powerful sign of recognition of the wrong done to the Jewish People.”Speaking of the close relations between the two countries on many levels, he said: “We think Israel is an invaluable partner and your commitment to dialogue among communities is admired in Spain.”Throughout the conversation Rivlin made many references to the UNESCO vote negating the Jewish relationship to Jerusalem, which he said was “absurd” and went against history.He asked Gomez-Acebo not to respond to anything he said about Jerusalem. “I’m practicing because I have the American ambassador after you,” Rivlin said.It was impossible for Rivlin, a great football fan, to speak to a representative of Spain without mentioning the two great football teams, Real Madrid and Barcelona. Jerusalem is divided in its support of one or the other, he said, adding that one of his grandsons was a Real Madrid fan and the other a fan of Barcelona.“Sometimes on Sundays, you can see more Israelis in Madrid than in Jerusalem.”