The Skystar aerostats are used by militaries for intelligence, surveillance, reconnaissance, and communications, as well as counter- IED missions. 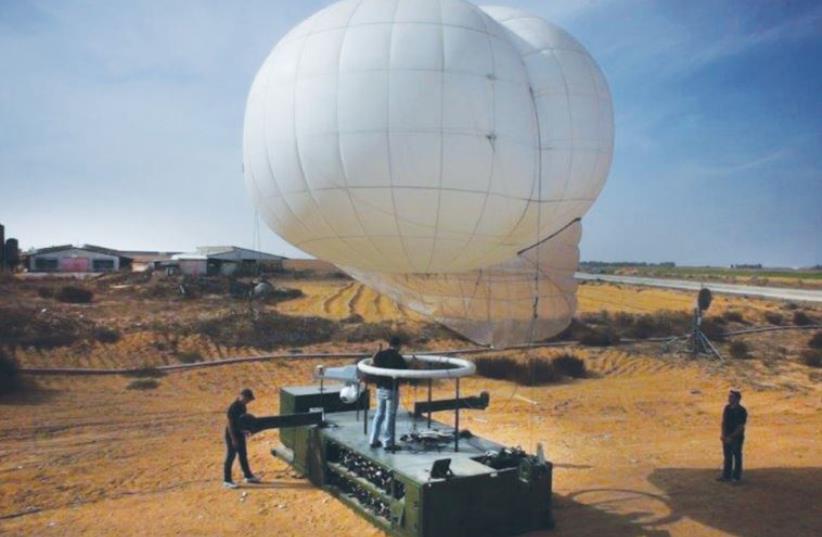 IDF SOLDIERS prepare to launch a Skystar 330 intelligence and counter-IED aerostat at a base somewhere in Israel recently
(photo credit: RT LTA SYSTEMS LTD.)
Advertisement
A new visual intelligence and counter-IED aerostat was unveiled by its Yavne-based manufacturer, RT LTA Systems, on Monday.The Skystar 330 will replace the Skystar 300 model, which was frequently visible over the Gaza border and is due to make its final flight in the coming days.Skystar 330 will have new features, including GPS navigation and four fiberoptic cables, a spokeswoman for RT LTA said.One of the new model aerostats is already operational in the IDF, while a European client has also purchased the model and is due to take delivery in the coming weeks.The Skystar aerostats are used by militaries for intelligence, surveillance, reconnaissance, and communications, as well as counter- IED missions.After gaining more than half a million operational hours in Israel and several other countries since 2007, RT LTA said the Skystar 300 model is due to end operations by December 31, though the company will continue to support and maintain the dozens of systems still operational worldwide.“The new Skystar 330 has four optical fiber tethers, enabling extended communication bandwidth and range,” the company said in a statement. “In addition, the new system is equipped with an upgraded navigation system with high capabilities that include point on map ability, as well as advanced controllers, allowing better control and management of missions and targets.”Maj. (res.) Rami Shmueli, RT LTA’s CEO, said, “The Skystar 330 upgrades the capabilities of the first member in the Skystar family – the Skystar 300. With the new technology that is introduced into this system, we were able to deliver a high-end system for military and homeland security applications.”The new tactical aerostat will be able to rise to an altitude of 1,500 feet. Filled with helium, the platform is tethered to a ground system, and transmits surveillance video to a ground control station.