"All I want is an education." 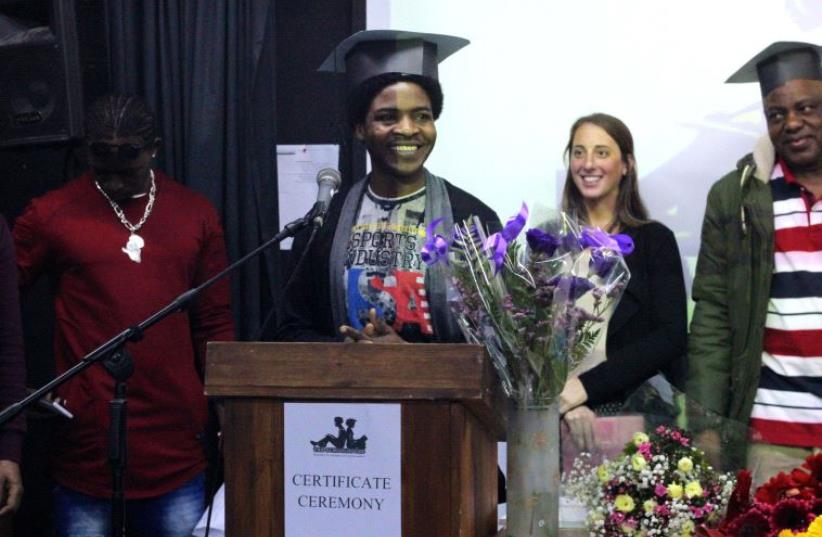 Gasim Ali, 24, gave a speech Wednesday night after accepting his graduation diploma
(photo credit: COURTESY SCHOOLHOUSE)
Advertisement
Gasim Ali was 11 years old when he separated from his parents in Darfur.Since then, the 24-year-old was displaced multiple times, spending time in Uganda, Chad and Egypt, before eventually making his way to Israel through the Sinai desert in 2010.Through all of these travels, Ali’s education suffered, but thanks in part to the NGO Schoolhouse, an adult education center for refugees, asylum- seekers and migrant populations, he hopes to one day obtain a university degree.“I’ve been running for over 10 years, and I always had hoped to be educated,” said Ali, who currently works as a cook in Tel Aviv. Nevertheless, when he arrived in the White City with hardly any money to his name, finding housing and employment took priority over pursuing education.In the mid-2000s, Israel experienced an influx of around 45,000 African asylum-seekers, mostly from Sudan, including Darfur, and Eritrea, many of whom now have children.Most asylum-seekers have concentrated in south Tel Aviv.The government calls these people “infiltrators” and wants to deport them when possible, leaving the Tel Aviv Municipality and a number of NGOs to handle their social welfare.But according to Sara Stern, founder and CEO of Schoolhouse, education is arguably the highest priority for many of them.“The Schoolhouse exists from hearing again and again how important education is to the asylum-seeker community,” Stern told The Jerusalem Post.

“They were saying ‘we want education, and we will pay for it.’ And that is when we started organizing.”Despite generally working low-wage jobs as cooks, construction workers and in hotels, students are willing to pay the NIS 150-NIS 200 for the fivemonth classes (financial assistance is available).Now Ali and more than 700 other students have received educational services since Schoolhouse opened in 2012 in Tel Aviv, with free classes also held in the Holot Detention Center in the Negev.On Wednesday, Schoolhouse held a graduation ceremony for about 60 students who had been studying beginner to advanced English courses and computers. In the auditorium of south Tel Aviv’s Minshar School of Art, which subsidizes rent for Schoolhouse, students spoke of their love of learning and dedication to the courses.“In my country, without education you are nothing,” said Amos, an immigrant from Nigeria, speaking in front of his friends and peers at the ceremony.“I was always afraid to speak in public because of my grammar.”But eventually a 70-yearold Israeli woman who was pursuing a university education, convinced Amos, who was “ashamed to study” because of his age, to return to school.Stern, who built the program from one classroom with five students to multiple classes with seven paid teachers, said the success really depends on the student.“It’s not just about the English, the computers or the math. It is really about who the person is and where they want to go,” she said.Merghani Ali, 28, from Darfur, said he gained public speaking skills and expanded his English vocabulary, which he hopes to harness toward pursuing a university degree. Ali said the experience has given him a taste of the university life he desires.“My teacher’s American accent makes me feel like I am in American university,” he said.