They have also requested to criminalize the organization. 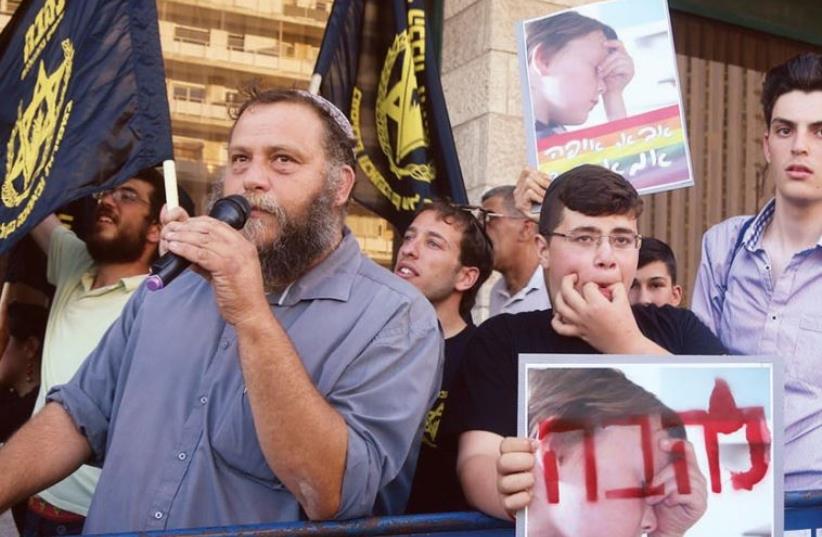 Sparring: Members of the Lehava movement protest. A sign reads, ‘Father, where is my mother?’
(photo credit: MARC ISRAEL SELLEM)
Advertisement
The Israel Religious Action Center on Wednesday asked the High Court of Justice to compel the prosecution to indict the head of radical right-wing group Lehava.The center – the public and legal advocacy arm of the Reform movement – along with the Reform movement, other NGOs and lynch victim Jamal Jalani, also requested that the High Court order Attorney- General Avichai Mandelblit to criminalize the Lehava organization.More specifically, the petition said that Mandelblit should indict Lehava head Ben-Tzion Gopstein for incitement to racism and violence.In addition, the petition demands that “the police must be ordered to take all necessary steps to prevent the gatherings of Lehava activists who threaten the Arab public in the center of Jerusalem, and in other locations.”Attorney Orly Erez Likhovski, director of the Legal Department of the Israel Religious Action Center, representing the petitioners said: “Law enforcement agencies have shown complete incompetence against the Lehava organization’s severe racial incitement, headed by Gopstein, for many years.“The price is paid by Arabs who are exposed to the heavy violence, which has become a common sight in central Jerusalem,” she said.The group of organizations and Jalani, victim of a racist lynch attempt in 2012, filed a similar petition in September 2014, but the High Court dismissed the petition in 2015 when the prosecution revealed that it was already secretly criminally investigating Gopstein.Since then, the petitioners say there has been no word from the prosecution about when and what it will decide, despite 45 inquiries.The petitioners also said that Gopstein preaches “hatred of Arabs and Christians through intimidation and racist incitement, and violent activity.”They allege that “Lehava’s message, based on the teachings of Rabbi Meir Kahane, is that Arabs are the enemies of Israel and contact with them will cause a disaster. Similarly, Lehava declares its intention to eradicate Christian missionaries from Israel; under this cloak, they incite damage to churches and holy sites, as well as to clerics.”Additionally, “Gopstein and Lehava are not averse to making offensive and threatening statements against the LGBT community, specifically coinciding with the annual Jerusalem Pride Parade,” said the petitioners.Lehava lawyer Itamar Ben- Gvir responded to the petition saying there was no evidence of criminal activity and that the petition was designed to silence Lehava’s right to free speech.