Begin was most noted for signing a peace treaty with Former President of Egypt Anwar Sadat in 1979, which led them to both share a Nobel Pece Prize for their work. 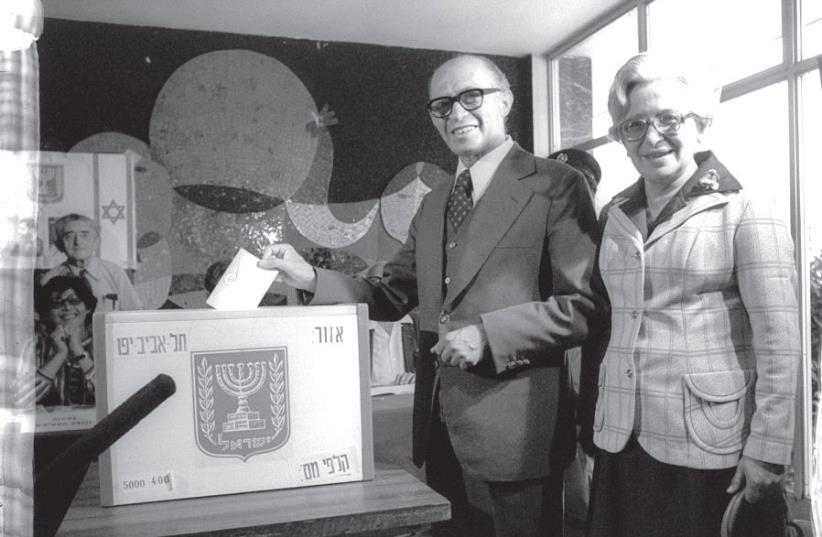 Menachem and Aliza Begin vote in the national election on May 17, 1977
(photo credit: YAACOV SAAR/GPO)
Advertisement
On August 16, 1913, 105 years ago Menachem Begin, the sixth Prime Minister of Israel, was born in the Russian Empire, today's Belarus. From the moment Begin was born, greatness was thrust upon him, being brought into the world by a midwife who coincidentally was former prime minister Ariel Sharon's grandmother, wrote Eric Silver in The Haunted Prophet, a biography on Begin. Begin was most noted for signing a peace treaty with Former President of Egypt Anwar Sadat in 1979, which led them to both share a Nobel Pece Prize for their work. This deal came to fruition because of Sadat's momentous visit to Israel in 1977, Camp David Accords in 1978 and months of negotiations. The Peace treaty resulted in 'normalized' relations along with an Israeli withdrawal from the Sinai PeninsulaBefore the six years and three months Begin was in office, he was the leader of the Irgun, a Zionist paramilitary organization in pre-state Palestine and a break-off from the organization, Haganah. After the creation of the state of Israel on May 14, 1948 and the beginning of the Independence War, Begin announced that the Irgun would disband and integrate into what would then become Israel's Defense Force. This would lead to one of the more tragic events in his career, the Altalena Affair. Begin brought weapons into Israel after his so-called truce and the IDF responded with an ultimatum and an attack. There were 18 casualties total with 16 Irgun fighters and 3 IDF soldiers. Begin was notably an outspoken critic of the Reparations Agreement between Israel and West Germany that was signed in 1952, arguing the accord was equating to forgiving the Nazi crimes and leading a demonstration against Knesset attended by some 15,000 people. Before leaving public life, Begin authorized the start of Operation Peace in the Galilee, an incursion into Lebanon, to fight the Palestinian Liberation Organization in 1982. Later that year his wife, Aliza passed away, a contributing factor to his resignation. In an interview with the Washington Post Begin said "I survived 10 wars, two world wars, a Soviet concentration camp, five years in the underground as a hunted man and 26 years in opposition in the [Israeli] parliament. Twenty-six years, never losing faith in a cause." He was in the opposition for a total of 29 years, before being elected prime minister in 1977.In recent years, polls have found Begin to be Israel's most-beloved prime minister of all time.Begin passed away on March 9, 1992 from a heart attack at 79.