Among those arrested were people associated with the crime organization headed by Israeli mobster Ytizhak Abergil who currently sits in prison. 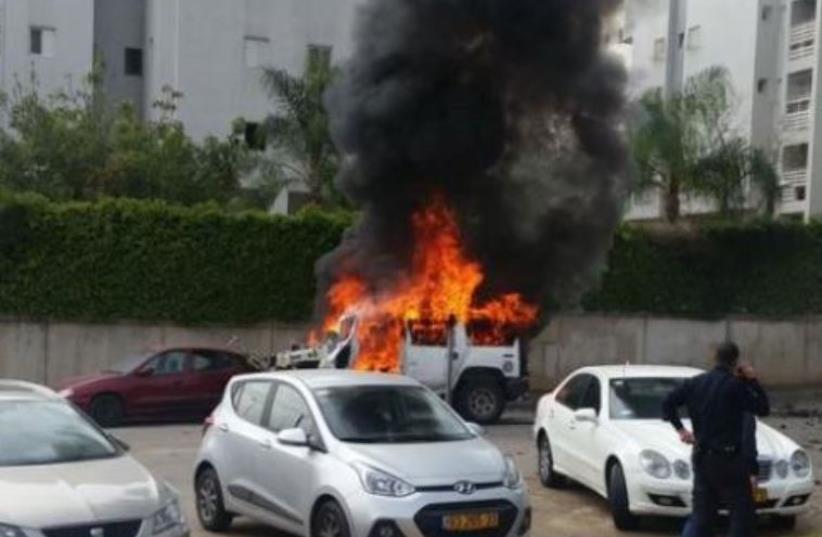 Scene of car bomb in Tel Aviv
(photo credit: POLICE SPOKESPERSON'S UNIT)
Advertisement
Police arrested six suspects and detained five for questioning on Tuesday on suspicion of drug trafficking and murder, including the murder of high-profile criminals Jordan Azoulay and Yitzhak Geffen.Among those arrested were people associated with the crime organization headed by mobster Yitzhak Abergil, who currently sits in prison.“This is a complex and elaborate affair, which includes an investigation into the suspected attempted murder of a witness [whose identity is still under gag order] and suspicions with respect to import and drug trafficking in Europe and South America,” the Lahav 433 special investigations unit said Tuesday.Police raided the houses of those arrested and said this was the “third step” in the ongoing mob investigation called “Case 1131,” which led to 14 arrests in August. Among the 14 arrested was Motti Hasin, who is regarded as the acting head of the Abergil crime organization.Hasin, 37, from Rishon Lezion, was indicted in August along with five others charged with the murder of Geffen in 2011 and the murder of Azoulay, whose body was discovered in July.The remand of Itai Sankar was extended until October 31 in the Rishon Lezion Magistrate’s Court while police are still seeking to extend the remand of the five other suspects.Under Case 1131 multiple murders are being investigated including the assassination of Avi David, shot at pointblank outside a Bat Yam steakhouse in October 2011, and the deaths of Azoulay, Geffen, Sharon Mizrahi, Mor Algrabli, Moshe Anhiisi, Rami Amira and Bar Cohen.Indictments were also filed in August against Moshe Ben David, 47, and Shmuel Ben David, 25. Moshe Ben David is accused of the murder of Algrabli six years ago.According to police, Moshe Ben David tried to flee the country on a yacht after being released to house arrest in September.