Only the garments remain

Exhibition showcases the clothes of victims of domestic violence 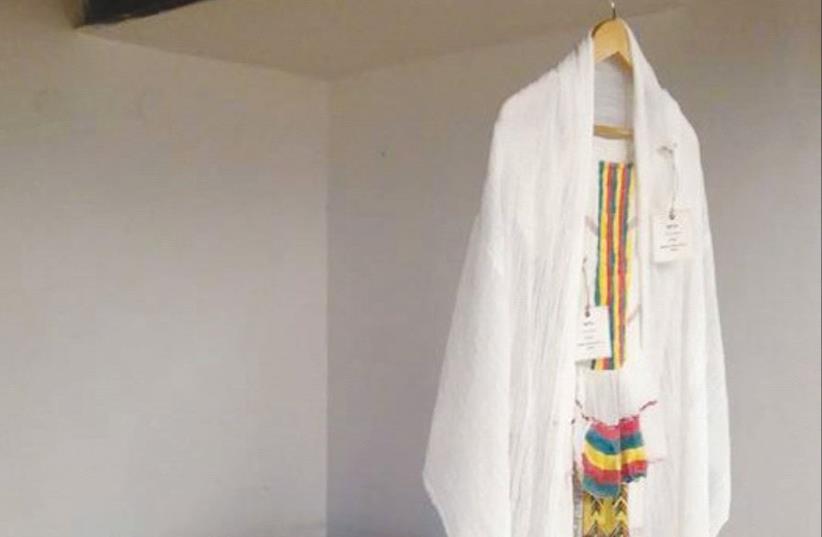 ‘THE CLOTHES we wear are an expression of who we are.’ The favorite garments of 11 murdered women created a poignant statement at a Tel Aviv exhibition on Sunday night.
(photo credit: FACEBOOK)
Advertisement
Few things transcend mother love. It is has no relationship to religion, race, nationality or socioeconomic status. Mothers dearly love their children and mourn if they die before them.As difficult as it is to cope with the death of a child who has died in illness – or as the result of a traffic accident, drowning, or falling from a height – it is that much more difficult to cope with the death of a child who has been murdered, especially if the murderer is not found and goes unpunished.Mothers, fathers, brothers, sisters, aunts and uncles of women murdered in Israel over the past 20 years came together on Sunday night at Beit Leeba in Tel Aviv’s Neveh Zedek neighborhood to remember their loved ones and to join a new campaign aimed at preventing domestic violence, which too often leads to murder.This was no ordinary protest against violence.It was an eerie reminder that violence and murder do not discriminate. Thus, among more than 200 people gathered in and outside the building were members of the Arab community, the Ethiopian community, the community of the former Soviet Union, the North African community and of course, sabras, native-born Israelis.The drawing card was an exhibition of the favorite clothes of 11 of more than 130 women murdered in Israel by husbands, boyfriends or close relatives over the past 20 years. The compelling exhibit is the brainchild of Keren Goldstein-Yehezkeli, a film and television director.On the day of the opening of the exhibition, Sami Kara, a Christian Arab, was indicted for having allegedly killed his 17-year-old daughter, Henriette, in June – on the day after she graduated from high school – because she was romantically involved with a Muslim.A week earlier, two women had been killed in the southern part of Israel – one in Sderot and the other in Beersheba.The exhibition, titled “She is Gone” features the favorite outfits of: Anat Elimelech, 23, murdered on December 2, 1997; Shlomit Alkobi, 26, murdered on September 30, 2005; Fatma Elhib, 13, murdered on June 12, 2014; Malkam Tasra, 26, murdered on November 7, 2010; Salamlak Tasra, 35, murdered on October 25, 2015; Iris Gorelik, 39, murdered on April 30, 2013; Doa Abu Sharich, 32, murdered in front of her children on September 24, 2016; Dafna Bar Zion, 49, murdered on August 14, 2014; Limor Rimokh, 28, murdered on January 23, 2013; Ganit Tsinman, 22, murdered on March 1, 1996; Alla Daher, 18, murdered on January 20, 2011.In most cases, the victims were murdered by jealous, fiercely possessive partners or ex-partners who couldn’t face rejection, and who decided that if they couldn’t have her, no one would.The women’s favorite garments were hung on coat hangers tied to nearly invisible fine wires suspended from the ceiling.Very often, when someone dies a natural death, relatives dispose of their clothes by giving them to charity. But when someone is murdered, it’s hard to give away anything they owned. These items of clothing worn by all the above-mentioned women were lovingly stored in closets, perhaps taken out once in a while to enhance a memory, such as on the birthday of the deceased.But it is doubtful that any of the clothes were simply left hanging where everyone could see them.Families of the 11 women entered the display area with a certain degree of trepidation, not quite sure what to expect. One mother buried her face in her daughter’s dress, as if to inhale whatever aroma may have remained from her daughter’s live body.The mother of another murdered women had tears running down her face, while the father stood grim faced, but obviously suffering.The pink tulle A-lined tiered slip dress of model and actress Anat Elimelech stood in a separate room, because hers was a special case. Her family had spent 10 years trying to prove she did not murder her boyfriend and then commit suicide, but that she had been murdered by him and that he had committed suicide. Eventually, they succeeded, said her brother Amir, who advised the families of all the victims not to allow their personal tragedies to break their spirit, and to help others who had endured similar catastrophes.The dress was actually the poster outfit for the exhibition.“Who would have imagined that 20 years after her death, her dress would be a poster dress?” asked senior Channel 2 anchor Dana Weiss, who has made a documentary about violence against women and who was the moderator for the evening.Weiss said that when she was making her documentary she met a riveting woman who knew that she was a target for murder and that she would be shot. She had taken a very matter-of-fact approach to her impending demise, her only hope being that her children would not be near her when it happened and would not have to witness something that could haunt them for the rest of their lives.Among the speakers at the event were: Joint List MK Aida Touma-Sliman, who in 1992 founded the Arab feminist group Women Against Violence and who currently heads the Knesset Committee on the Status of Women and Gender Equality; Zionist Union MK Stav Shaffir; and Arab social worker and activist against violence Samah Salaime, the founder of Na’am, or Arab Women in the Center, which is headquartered in Lod.As she entered the loft where people were assembled, Touma-Sliman said that it had been chilling to walk past the garments downstairs and feel something of the women who had worn them.“The clothes we wear are an expression of who we are,” she said. She expressed regret that the public had become inured to violence. “Unfortunately we had to lose more women in order to be shaken out of our complacency,” she said, adding that since 1992, she has been involved in the struggle to curb domestic violence – a struggle that she insisted the government and all the nation’s decision makers must join.Salaime asked everyone present to work toward a single goal: that a whole year should pass without any woman being murdered in Israel.