Or Asraf's father at son's funeral: 'Death grabbed you as you walked happily'

Israel’s sole fatality in Nepal is laid to rest in hometown of Lehavim. 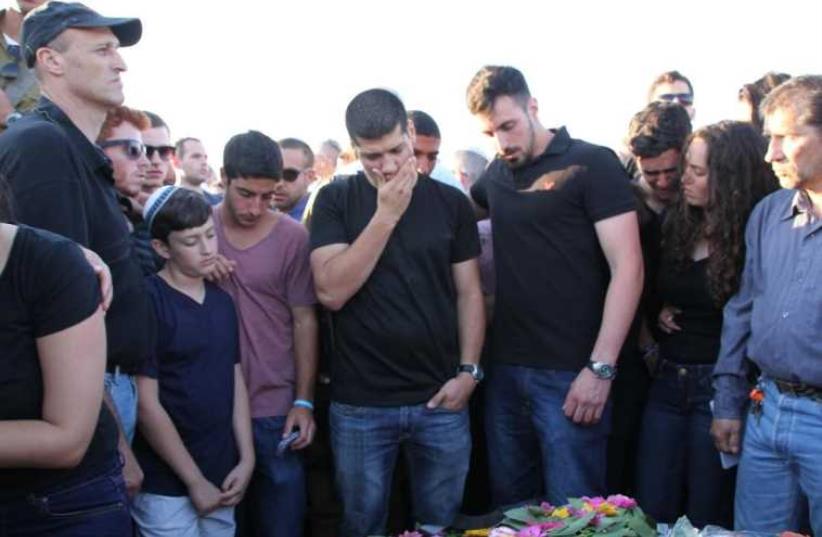 PATRICK ASRAF (second left) watches as a mourner lays a wreath on the grave of his son, Or, at Lehavim, May 6, 2015.
(photo credit: TOVAH LAZAROFF)
Advertisement
Just 100 meters kept Or Asraf from escaping a massive avalanche that swept him to his death in the Himalayan mountains on April 25, Patrick Asraf said as he eulogized his 22-year-old son on Wednesday.“For 80 years the Earth in Nepal did not tremble. It was waiting patiently for someone like you to wake her from her slumber,” said Patrick as he described the earthquake that struck while his son was in the midst of a hike.“Death grabbed you, as you walked happily, with a heart filled with goodness, enjoying every moment you were in nature,” Patrick said.As the tall man spoke, he looked at his son’s shroud-wrapped body laid out in front of the thousands of mourners who gathered in the small Negev cemetery in Or’s hometown of Lehavim.In the immediate aftermath of the quake, Or was just one of the 250 unaccounted for Israelis in Nepal, but after most of them were located, public attention focused on the search for the young man.Last week, with no sign of life from his son, Patrick, joined by former members of Or’s elite Egoz reconnaissance unit in the Golani Brigade, flew to Nepal to help search for Or.They located him only on Sunday afternoon, eight days after the earthquake, but it took another two days before Patrick landed back in Israel with his son’s body. Or was Israel’s only fatality in the Nepalese earthquake.“We have arrived at the end of the journey. You are home,” Patrick said.He described how his son had set out alone that Saturday morning at 7:30 on a 10-day trek in the mountains, having taken everything he needed with him, including a satellite phone.Or walked more quickly than the other trekkers and passed them. He saw snow-capped mountains. He heard the chirping birds and a rushing river.“Israeli travelers who saw you reported on a happy, earnest young man, an experienced trekker who had enjoyed every moment in nature,” said Patrick.“That afternoon the Earth shook. Parts of the mountains moved as if they were dust.There were more than 100 avalanches. The avalanche in which you were caught was over 300 meters. You needed just 100 meters to get away safely. But in the face of the terrible avalanche, you didn’t stand a chance. A tidal wave of rocks rushed downward and swept you with it,” Patrick said.Out of the terrible tragedy, there was one “point of light,” said Patrick. His son didn’t suffer and died doing what he enjoyed. The avalanche did not hide his body, it left it in the open, so that it could be discovered. No one was injured in the rescue efforts, Patrick said.He thanked his son’s friends and Israeli would-be rescuers, including those from IsraLife, who risked their lives to find Or.“You were the salt of the Earth, a beloved son, a dear brother and a beloved friend. You were the best of the best. You had the smile of an angel,” Patrick said. “From the moment you were born, we knew that we had been given an incredible treasure that we always feared would be taken from us.”Others who eulogized him described how he had lost a number of friends in Operation Protective Edge last summer and was himself wounded. They explained how he had taken the time to visit the families of his friends who were killed in Gaza and had remained in close contact with them.Or’s younger sister, Ella, said she now imagines that her brother is in heaven.“I hope they brought you a new guitar, because you left yours here, along with a family and a dog, that miss you so much it hurts.”She thanked him for all the small things he had done, like waking her up early on Saturday so she would not miss the children’s programs on television. Ella recalled how he had sung songs for her and told her about his hikes.“You will never again laugh when I tell you that, with your curls, you look like a sheep, or take me on a trip,” she said.“Those who know Or know how much he liked Spider-Man. He would dress up as Spider- Man and draw him,” Ella said. She now thinks that was because he himself was a hero.Once, when she was in the market, she bought a necklace reminiscent of the Golani symbol. Over the years she got in the habit of wearing it every time she missed him, Ella said.“I have not taken it off since the earthquake,” Ella said.Her older brother was her guardian angel, Ella said. “Now you really are an angel.”