'Or Asraf said he’d see us at the next village'

The massive earthquake which struck Nepal, setting off an avalanche, swept Asraf, 22, off his path and to his death. 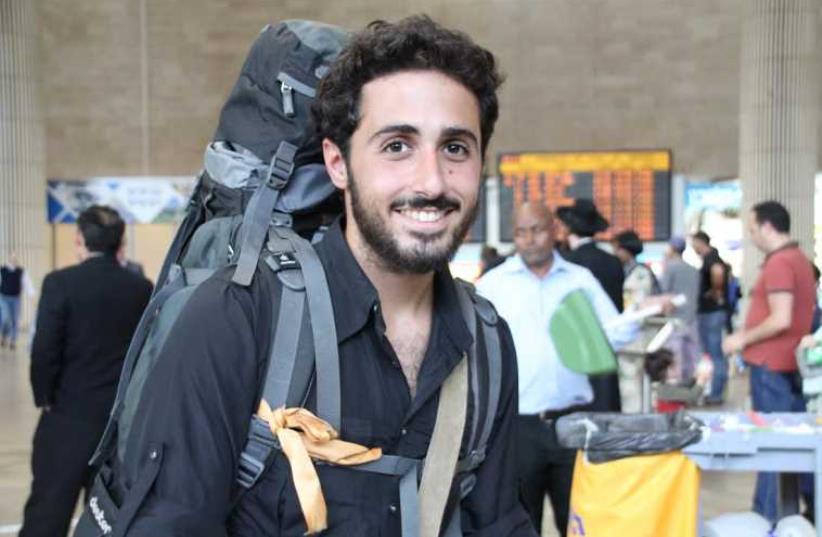 Omri Kadoch at Ben Gurion International Airport on Sunday, right after he landed from Nepal
(photo credit: TOVAH LAZAROFF)
Advertisement
“We will meet at the next village,” Or Asraf told fellow trekker Omri Kadoch on the morning of Saturday, April 25.“Then what happened, happened,” Kadoch said.Almost five hours later, a massive earthquake struck Nepal, setting off an avalanche that swept Asraf, 22, off his path and to his death.The two young men from nearby communities in the Negev had just met the day before at a guest house in the Langtang area of the Himalayan state.Kadoch, 23, was six months into his post-army trip and was traveling with five friends.“Or was an amazing person, really,” Kadoch said on Monday, as he recalled that meeting for The Jerusalem Post.He had landed at Ben-Gurion Airport the day before to the relief of his mother, Levana, and sister, Einav, but to the news that rescue workers had just found Asraf’s body.“We told [Asraf] he could join us,” Kadoch said. “But he said he was going ahead alone. He started the trek half-an-hour before we did. He was in good shape, he was running fast and we were a little bit lazy.”Kadoch said that at 12:15 p.m., some four hours after they started hiking, the quake struck as they walked through a valley.Suddenly rocks fell near them from the mountains.“At first we thought it was a landslide, but then the earth moved and we knew it was an earthquake,” Kadoch recalled.Some of the scariest moments were in those initial moments. “I took the camera and started filming. I thought, ‘if I am going to die, at least my mother should know what happened to me,’” he said. “It was bad.”He stopped filming and started running as more rocks fell. His friends ran with him, seeking shelter, but only half of them found a safe spot.Kadoch said that he and two other friends had to climb a small distance up the mountain until they found a small cave.The trio stayed there for four hours as aftershocks rocked the mountain. He said that once it seemed quieter they hiked back to the valley to find the bags they had dropped.The other half of his group was nowhere to be seen and someone had rummaged through his bag and removed all the warm clothing.Unsure what happened to them, he and his two remaining friends decided that the valley was dangerous, and that they would be safer on higher ground.They didn’t understand the extent of the disaster.“We thought we were at the epicenter of the quake,” Kadoch said.Throughout their journey to safety, he said, they were helped by local Nepalese people.“We started climbing the mountain with a local family, who really helped us. We did not have any water or food. While we were climbing there were still landslides near us,” he said.That night, they found a safe place to sleep in a forest higher up on the mountain. At times they could still feel the ground moving underneath them.They woke at dawn and continued hiking upward in the direction of a village. The owner of a dairy farm gave them refuge. In turn, they created a clearing where they wrote out the letters “SOS,” in hopes that a helicopter could see it from the sky.“It didn’t work,” Kadoch said.For the three days that they walked, there was no cellular reception and they were cut off from the rest of the world. But they began to hear bits and pieces of the extent of the disaster.Only on Tuesday did they meet four Israelis with a satellite phone who were waiting to be rescued by helicopter. Through those Israelis they found that the lost members of their group were safe.As they waited for rescue, they were adopted by a Nepalese local.“He took us under his wing, brought us mattresses and blankets as we waited,” said Kadoch.In Israel, his mother and sister were beside themselves with worry.The sister posted Kadoch’s photo onto a Facebook page. Then on Tuesday, the father of the Israeli trekker with the satellite phone contacted her to assure her that he was safe.“I cried,” said Kadoch’s mother on Sunday as she looked at her son as he stood in Ben-Gurion Airport wearing a large backpack. “I’m still crying.”Kadoch said that he and his friends were rescued by helicopter on Thursday and flown to a village with an army base. They were able to use a satellite phone there to call their families.They then walked for six hours until they could catch a bus to Kathmandu.Once in the city, they spoke to a rescue team in the Israeli field hospital to help provide coordinates of Asraf’s whereabouts. Israeli rescuers found Asraf’s body on Sunday afternoon, and his body is expected to be flown out of Kathmandu to Israel on Tuesday.On Saturday, Kadoch flew out of Kathmandu on an Israeli Air Force plane along with several dozen trekkers who had been similarly stranded.Now that he has returned to Israel, Kadoch said, “first I am going to eat good food.”His homecoming, however, was bittersweet.“I am happy to be home, but I am sad for Or.”