“We need to show Israel what unity really is. Religious, nonreligious, right-wing, left-wing – who cares.” 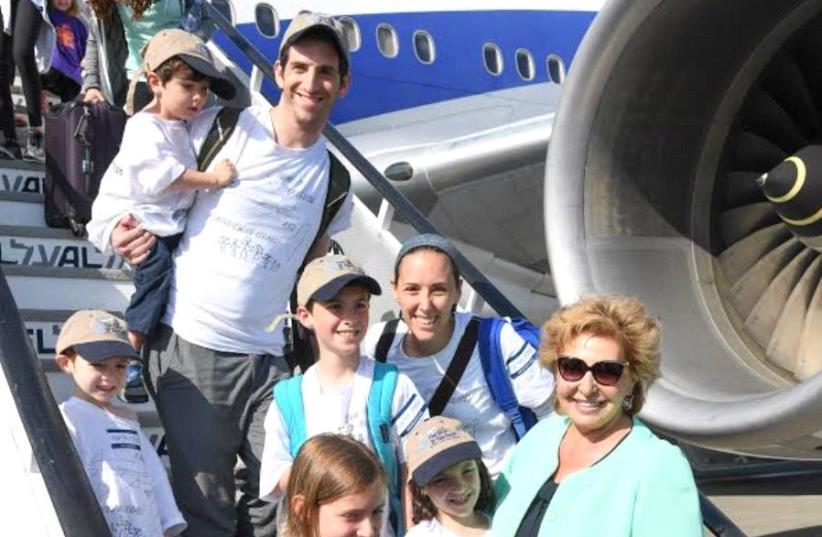 The Bienenfeld family from Plainview, NY getting off the plane in Tel Aviv with Minister of Aliyah and Integration Sofa Landver.
(photo credit: SHAHAR AZRAN COURTESY OF NEFESH B’NEFESH)
Advertisement
On Monday, 201 olim from 16 US states and three Canadian provinces gathered at JFK Airport to take a flight to the Promised Land.
Immigrants celebrate arrival to Israel (credit: nefesh b"nefesh)
The El Al Boeing 777 was chartered by Nefesh B’Nefesh, in cooperation with the Ministry of Aliyah and Integration, the Jewish Agency for Israel, Keren Kayemeth LeIsrael-Jewish National Fund and JNF-USA.The passengers include 34 families, 78 children, five sets of twins, and 51 singles, working in a range of professions. The oldest is 82 years old, and the youngest a month and a half. Forty-seven of the immigrants are moving to the periphery, as part of Keren Kayemeth LeIsrael-Jewish National Fund’s Go South and Go North programs.I spoke to Josef and his wife, who together with their kids, aged seven and nine, are making aliya from Ventura County in California to Zichron Ya’acov. There are not many Jews where they were living and they felt that their children were not being given the Jewish education they needed. They are making aliya because they want their kids to grow up Jewish and learn about their heritage.Among the olim were 14 who plan to join the IDF in August as lone soldiers, in the country without close family to help them.“Israel is my home and birthright, and the homeland of every Jew,” said Joshua Eisdorfer, 22, from Rockville, Maryland. “In Bamidbar [the Book of Numbers], Moshe says, ‘Shall your brothers go to war, and you sit here?’ Israel is the defense of world Jewry, and I want to be in the vanguard.”At JFK, Nefesh B’Nefesh co-founders Rabbi Yehoshua Fass and Tony Gelbart bid the olim farewell as they prepared to board their flight to their new homes.“Today we welcome hundreds of extraordinary olim who have chosen to leave their lives in the Diaspora and make Israel their home,” said Fass. “These modern-day pioneers, many of whom are moving to Israel’s North and South, are not only fulfilling their personal dreams, but the dreams of the Jewish nation as a whole. It has been remarkable, these last 15 years, to have assisted thousands of olim in making an impact on the State of Israel, and we hope to continue to do so for today’s olim.”Gelbart added, “We need to show Israel what unity really is. Religious, nonreligious, right-wing, left-wing – who cares.”The emotional highlight of the event came when Fass called on all the future lone soldiers to come up and sing Hatikva.Before boarding, families bade tearful goodbyes to relatives and friends they were leaving behind. There was both sadness and excitement.During the 10-hour flight, I spoke with Rena Safer, 80, and her husband Fred, 82, who are making aliya to Jerusalem from Milwaukee, Wisconsin. Most of their children, grandchildren and great-grandchildren live in Israel; they decided to wait until Fred retired to make the move. Rena was born in Jerusalem during the British Mandate, however, due to the Arab riots, her parents decided to move to America when she was just six months old. She feels that she has come full circle.Dozens of photographers and reporters gathered at the base of the stairs at Ben-Gurion Airport on Tuesday, leading the olim off the airplane and onto the ground of their new home. Before exiting the plane, it was announced that there would be no official speeches due to the current heatwave. However that did not deter the hundreds of Israelis, young and old, dressed in blue and white, waving Israeli flags, who came to greet the olim.Tuesday’s planeload is the first of two Nefesh B’Nefesh charter flights this summer, which, along with 11 group aliya flights, and olim arriving independently, will bring more than 2,000 olim making aliya through Nefesh B’Nefesh this summer from North America.