Maj.-Gen. Kamil Abu Rukun, the head of COGAT, explained that Israel could not allow unilateral boycotts that damage the economies of both sides. 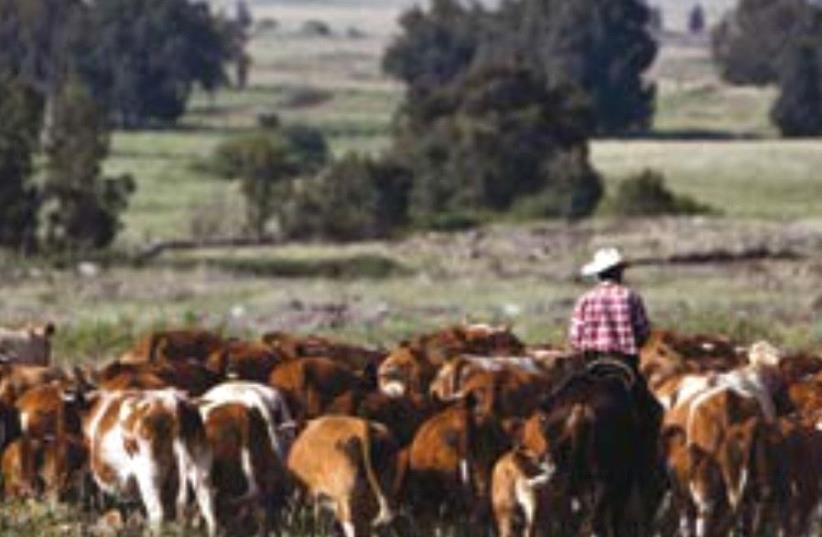 AN ISRAELI COWBOY tends cattle on a ranch just outside Moshav Yonatan, two kilometers south of the Syrian border in the Golan Heights, in 2013.
(photo credit: REUTERS)
Advertisement
Israel has threatened the Palestinian Authority with "serious consequences" if the PA’s Agriculture Ministry continues to bar the import of Israeli cattle and other livestock. The ban has been in place since September 9.COGAT (Coordinator of Government Activities in the Territories), the body that Israel utilizes to oversee its policies involving the West Bank and Gaza Strip, warned the PA that if it did not reverse course “in the near future, large amounts of Palestinian agricultural produce would not be allowed into Israel.”When reached by The Media Line, Maj.-Gen. Kamil Abu Rukun, the head of COGAT, explained that Israel could not allow unilateral boycotts that damage the economies of both sides.“After several inquiries to resolve the issue on various levels, I have warned that if the situation does not return to normal, we will bar the entry into Israel of many Palestinian agricultural products,” Abu Rukun said.COGAT’s warning came on Saturday following protests by Israeli farmers outside the Knesset, Israel’s parliament.Azmy Abd al-Rahman, spokesperson for the PA’s Economy Ministry, told The Media Line that if Israel bars the entrance of Palestinian products, it would be faced with similar steps.“The decision comes as part of the PA’s plan to reduce dependence on Israel and focus on economic relations with Arab states instead,” he said.The plan, introduced in September, involves PA appeals to Arab countries for economic cooperation.Rahman explained that the PA had the right to diversify its doors of import and export based on what it deems appropriate for the national economy.“All countries of the world use a policy of diversity in their trade relations,” he explained. "Israel does not want the Palestinian economy to become independent so as to maintain full political control over the West Bank and prevent Palestinian sovereignty.”Rahman stated that approximately 75 percent of all Palestinian exports involve Israel as an importer or transit point, and that about 60% of all Palestinian imports come from Israel. He added, however, that under the Paris Protocols, which oversee the economic policies that grew out of the Oslo Accords, the PA can import calves from abroad.Osama Nofal, an economic analyst and instructor at University College of Applied Sciences in the Gaza Strip, told The Media Line that the PA’s plan lacked analysis and vision, as Israel controls all Palestinian ports and crossing points.“We can’t talk about economic disengagement while we have no control over our borders,” he explained. “Israel can indeed prevent [the PA] from importing cattle, first of all due to the very difficult Israeli conditions on imports.”Nofal also pointed out that a full and sudden commercial transformation could harm Palestinian businesses, which are used to trading in Israeli products of a certain quality and transferring them at minimal cost.“Turning to Arab countries for trade while their economies are weak and their products are of a lower quality will affect the Palestinian private sector,” he opined. “We first must get rid of the Paris Protocol and then think of a strategy to become economically independent of Israel.”Moeen Rajab, a Palestinian economic expert, told The Media Line that trade relations require a balance of advantages that satisfies both sides.“This is not the case,” he said, “between Israel and Palestine.”Read more articles from the Media Line.