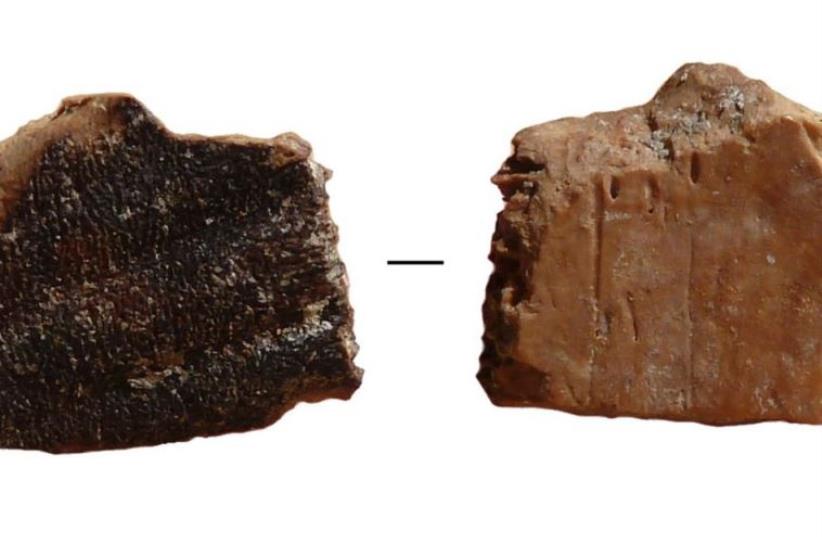 Burn marks on a prehistoric tortoise bone found in Quesem Cave, outside of Tel Aviv
(photo credit: DR. RUTH BLASCO)
Advertisement
Hunters in the Paleolithic era some 400,000 years ago preyed on tortoise meat, which they sophisticatedly prepared in fire pits in the Quesem cave, a few kilometers outside of Tel Aviv, researchers from the Tel Aviv University announced on Monday.The finding, published in the prestigious Quaternary Science Reviews, sheds new light on the eating habits of ancient man, said Prof. Avi Gopher, who co-authored the study.“The debate was whether people were consuming small animals – like rabbits and birds, which wasted more energy to gather – or only large ones, which provided more food using less energy to gather,” said Gopher by phone on Monday.“The big story that we suggested in the paper is not just that they ate tortoises, but how they ate them. We have evidence of tortoise bones from fireplaces that are 200,000 to 400,000 years old.”According to Gopher, who carried out the study with Prof. Ran Barkai of TAU and Dr. Ruth Blasco of the National Institute for the Study of Human Evolution, in Spain, the findings indicate that the inhabitants of the cave dismembered, cooked and ate the turtles in several different ways.The sophisticated preparation and cooking of the tortoises “represents an extraordinary level of biological and cultural evolution of man,” added Barkai, noting that the cave’s relics reveal one of the earliest known uses of fire to prepare food.“In general, the diet in Quesem cave was based on the hunting of medium and large animals and vegetarian food,” he continued.“The cave was full of bones of mammals – especially deer, cattle, horses and pigs.Ancient humans took full advantage of those calories, including the bone marrow.”Although the researchers note that tortoises were long a part of ancient man’s diet, the finding is unprecedented in determining how the meat was prepared.“In some cases, the tortoises were roasted whole in their shells,” said Gopher.“In other cases, the shells were cracked and the tortoises were dismembered...and the cooking methods differed.”Indeed, in some instances, the bones indicate that the tortoises were surgically dismembered as if “preparing French-style gourmet cuisine.”Due to the famously slow gait of tortoises, Gopher added that small children and the elderly were also able to hunt them.“Until a few years ago, many researchers assumed that only modern humans were able to use the entire range of natural resources, while early humans such as Homo erectus and Neanderthals hunted large animals only,” he said.“Today, we know that is incorrect, and the new findings confirm this. Humans in the Quesem cave enjoyed a varied, balanced diet, including delicious steaks, bone marrow, plant food, and occasionally even tortoises – and all this 400,000 years ago.”Gopher continued: “They knew how to use all the resources at their disposal, and they knew how not to destroy them.”