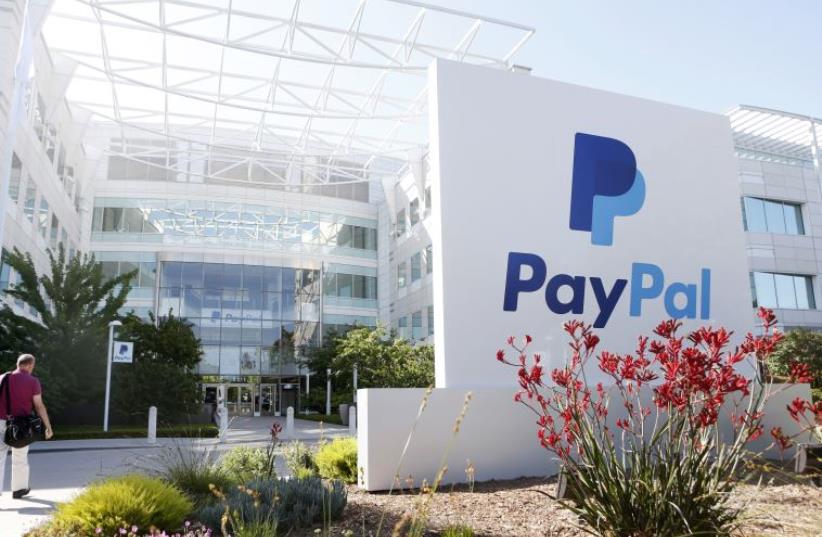 Paypal
(photo credit: REUTERS)
Advertisement
PayPal launched an investigation last week into its account with a neo-Nazi organization that is pro-Hezbollah, pro-Assad and also supports a convicted Holocaust denier.In response to a Jerusalem Post query on Twitter, the microblog’s support handle AskPayPal wrote in German: “We in no way, wish to support this [the Neo-Nazi website The Third Way (Der Dritte Weg)].”PayPal sent a second tweet to the Post, saying the financial giant will make its inquiry into the neo-Nazis a “priority.”The Third Way lists various PayPal funding amounts on its website ranging from €10 to €100. PayPal is the only payment method listed on the The Third Way’s website, and it urges donors to sponsor its “party work.”The Simon Wiesenthal Center’s chief Nazi-hunter Dr. Efraim Zuroff told the Post on Sunday that if PayPal is serious about implementing its policy against racial incitement and the dissemination of hatred, it “should not be hiding behind the fact that Germany has not banned The Third Way, which is clearly antisemitic and actively promotes antisemitism.” Zuroff oversees the Jerusalem-based office of the Wiesenthal Center.PayPal’s media inquires division wrote the Post by email on Friday saying it regularly assesses questionable activities objectively against its Acceptable Use Policy.“PayPal’s policy is not to allow our services to be used to accept payments or donations to organizations for activities that promote hate, violence or racial intolerance,” it said. “Achieving the balance between protecting the ideals of tolerance, diversity and respect for people of all backgrounds and upholding the values of free expression and open dialogue can be difficult, but we do our best to achieve it.“As individuals and as a company, we may disagree with the attitudes expressed by some of our account holders, but we respect the right to free expression and open dialogue.As part of this process, we carefully review actions reported to us; and discontinue our relationship with account holders found to violate our policies.”When pressed by the Post about the findings of the Pay- Pal investigation, the company said: “Due to our policies, we cannot comment on the details of any specific PayPal account. However, we would like to stress that PayPal has zero tolerance for the use of our secure payments platform to facilitate illegal activities.We make every effort to comply with laws and regulations around the world. Compliance with these laws is something we take very seriously.”The Third Way has also come out in support of convicted Holocaust denier Horst Mahler. Mahler served multiple sentences in Germany for Holocaust denial and other Nazi-related activities. After being released from a 10-year sentence in 2015 owing to ill health, it is believed that Mahler fled to Hungary in April and was subsequently detained there this May.The Third Way then wrote: “Freedom for Horst Mahler: Political Prisoner of the Federal Republic of Germany.” It is unclear if the website has used its PayPal funds to support Mahler. The website lists multiple blog posts in support of him, and on Friday, The Third Way expressed its “solidarity” with Mahler.Meanwhile, Germany’s domestic intelligence agency has been monitoring The Third Way’s activities. According to a 2016 Bavarian intelligence report, the intelligence officials deemed the website to be spreading an antisemitic ideology. The neo-Nazis oppose asylum for refugees and foment xenophobia across Germany, according to German intelligence reports reviewed by the Post.The Third Way published an April 30 report on its members’ visit to Lebanon to champion Hezbollah’s war against Israel. According to the website, they met with the extremist Syrian Social Nationalist Party in Lebanon and representatives of the Assad regime in Syria. The Assad regime harbored the Austrian Nazi war criminal Alois Brunner.Also, Kai Zimmermann, a senior leader of The Third Way, visited the Hezbollah propaganda museum called Where the Land Speaks to the Heavens in the village of Mleeta in southern Lebanon, and posed next to a plaque reading, “No, Israel is not invincible.” The neo-Nazi group labeled Israel a “terror state” on its website and calls for a full-blown boycott of the Jewish state. Zimmermann did not immediately respond to a Post query about the organization’s PayPal account.