Nearly 200 towns in the North and South will stop all municipal services, including garbage collection, but not schools, for one day. 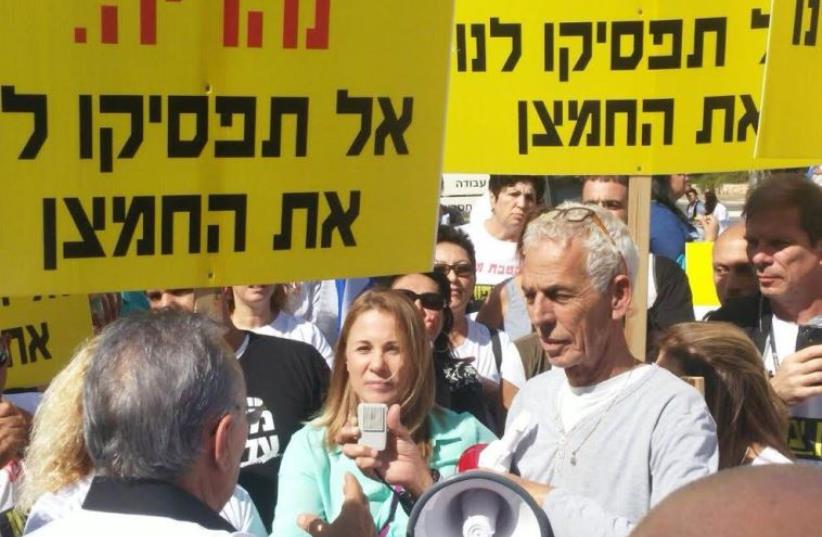 Protests against proposed changes to the criteria for periphery residents to receive tax benefits, October 2015.
(photo credit: Courtesy)
Advertisement
Thirty municipalities in the periphery are expected to strike Monday in protest of the government’s decision to wait until after the budget is passed next week to determine its tax break policy.The cities and local authorities, which are responsible for nearly 200 towns in the North and South, will stop all municipal services, including garbage collection, but not schools, for one day.The strike comes a week after Prime Minister Benjamin Netanyahu decided to delay the changes to criteria for periphery residents to receive tax breaks, which would have resulted in residents in some periphery areas with above-average salaries to have smaller reductions than in previous years. His decision came on the second day of a general strike by leading Western Galilee cities and the Histadrut Labor Union in the area, and as Likud mayors and activists pressured MKs to cancel the changes.In recent weeks, Knesset Finance Committee chairman Moshe Gafni (UTJ), with the support of Netanyahu, Finance Minister Moshe Kahlon and other coalition party leaders, proposed changing the system of tax cuts for peripheral areas from one in which specific towns receive blanket benefit, to one in which benefits would be differ for residents based on income criteria. Gafni drew up the outline following a High Court decision that all benefits would be canceled if the criteria were not changed by November 30.The new eligibility criteria would have more than doubled the number of periphery towns and cities to receive tax breaks to 407 from 192, and the budget for the expanded list would have increased to NIS 1.2 billion from NIS 850 million.Unlike the Western Galilee municipalities that went on strike last week, the 30 cities and local authorities support Gafni’s outline, writing in their announcement of Monday’s protest that it “finally creates justice and equality for about 200 towns in the North and South, [and] we, therefore, demand that it be promoted immediately.”MK Tali Ploskov (Kulanu), a former mayor of Arad who has advocated for months to change the criteria, plans to meet the mayors and local authority leaders in the Knesset on Monday.“Gafni’s outline brought great news for hundreds of thousands of residents of the periphery,” she said Sunday.“I plan to demand that the prime minister bring up the outline for authorization before the High Court’s target date to cancel everyone’s benefits.”