Plan for Beduin calls for spike in construction – and in demolitions 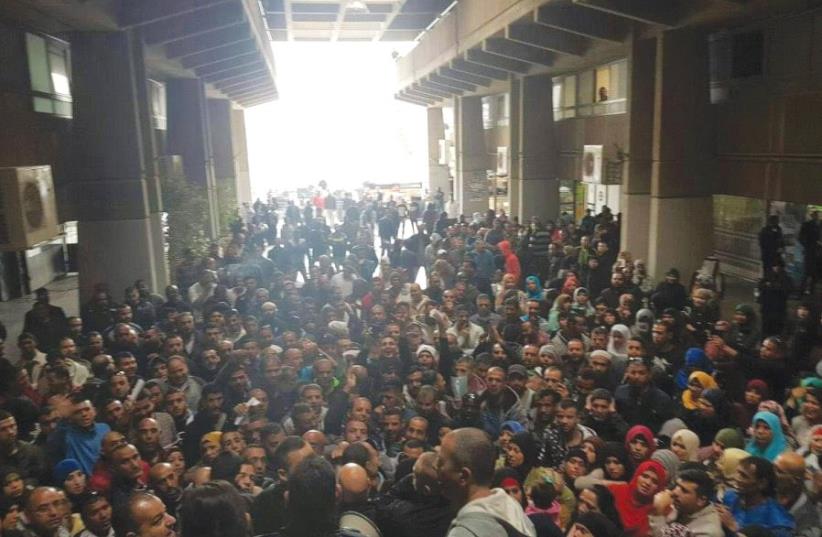 AN UNEXPECTEDLY LARGE crowd of Rahat residents waits in Beersheba to apply to purchase housing plots.
(photo credit: MOSAWA CENTER)
Advertisement
An NIS 3 billion plan for upgrading Beduin towns that was launched on Thursday provides for unprecedented investment in housing, health and employment in impoverished communities but also envisions a sharp increase in home demolitions in unrecognized villages, officials say.Thirty thousand housing units are to be built over the next five years in keeping with the plan, known as Homesh, according to Yair Maayan, director of the Authority for the Development and Settlement of the Negev Beduin. Fifteen thousand of the units will be in Rahat, the largest Beduin city in the world with nearly 70,000 residents, located 12 km. north of Beersheba.Maayan said the housing will accommodate people currently living in unrecognized villages and also meet natural growth needs of residents of the nine towns and eight other state-approved communities.“The plan is to reduce gaps between the Beduin and other citizens,” he said. “We want to enable them to live in reasonable conditions and integrate them into Israeli society. We want them to fit in in employment and education like all citizens of the country so that they will have the gains and opportunities the state gives citizens.”To combat high unemployment, the budget puts emphasis on skills training, the encouragement of small businesses and giving employers incentives to hire Beduin.The health budget funds emergency services, care for infants and small children, instruction in preventing child accidents and resuscitation equipment. NIS 210 million is earmarked for transportation infrastructure and NIS 250m. to provide more public transportation. NIS 780m. will be put at the disposal of local authorities so they can improve services. NIS 100m. will go to build public facilities such as community centers, sports fields and libraries.IN AN interview with The Jerusalem Post in October, Agriculture Minister Uri Ariel, who oversees the Beduin authority, indicated that the plan is based on offering housing and better conditions in the towns on the one hand, while heightening enforcement, namely the threat and reality of home demolitions in the unrecognized villages, on the other.Maayan confirmed that the plan will translate into a marked rise in enforcement. He said that NIS 250m. – nearly 10% of its budget – will go to “activities to safeguard land and the hiring of more inspectors and police.” That represents a three-fold increase over the previous budget, he said.Maayan dismissed criticism by Abraham Fund Initiatives co-director Thabet Abu Rass that the initiative was devised without the participation of Beduin. “This plan was drawn up with the complete cooperation of all the heads of communities and council heads.”Maayan said that the plan does not aid the unrecognized villages. The authority’s goal is for them to cease to exist over the next 10 years, Maayan said. The overwhelming majority of their residents will end up in towns and existing state-approved communities. For a small number of them new villages will be established, he said.There are currently 120,000 residents of 35 unrecognized villages, according to Atiyeh al-Asam, head of the Regional Council of Unrecognized Villages in the Negev. There have been 3,500 home demolitions in the last three years, he said.Abu Rass praised the government “for finally putting in such an effort to solve the problems of the Beduin. It is unprecedented and it’s budgeted,” he said. But he added: “I’m calling on the government not to plan for the Beduin without talking to them.“A plan can be great, but if it’s on land claimed by different tribes, it will bring strife,” he said. Abu Rass criticized the Beduin authority for lacking Beduin employees. Only four of its 60 workers are Beduin, according to Maayan.In the view of MK Goumha Azbarga (Joint List) the plan is “racist” and misguided in not halting demolitions or allowing for the residents of the unrecognized villages to remain in place.“People want to remain. There are 12 million dunams [1.2 million hectares] in the Negev, and the problem can be solved with goodwill. But there is no goodwill. People want to raise sheep and continue their agricultural way of life. They don’t want to be in the city,” Azbarga said.