“I call on the international community to halt, by any means, Iran's attempts to bypass the sanctions via the sea,” he said. 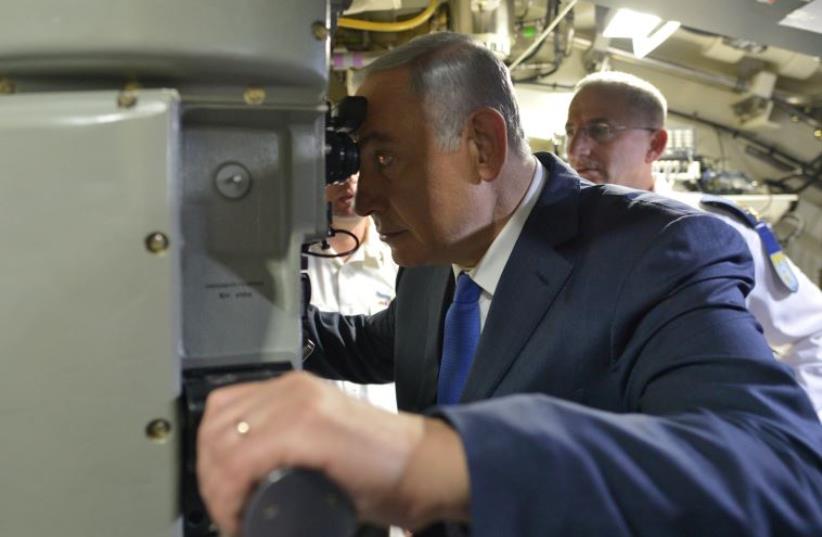 Netanyahu at the INS Rahav submarine arrival ceremony
(photo credit: KOBI GIDEON/GPO)
Advertisement
Israel’s navy may become involved in stopping illicit Iranian oil shipments, Prime Minister Benjamin Netanyahu said on Wednesday, indicating a significantly new area of operations for the navy.“Iran is trying to bypass the sanctions on it through the covert smuggling of petroleum via the sea. As these attempts expand, the navy will have a more important role in efforts to block these Iranian actions,” Netanyahu said at a navy cadets’ graduation ceremony in Haifa.“I call on the international community to halt, by any means, Iran’s attempts to bypass the sanctions via the sea,” he said.US President Donald Trump last year quit the nuclear deal and reimposed some sanctions, aiming to cut Iran’s oil exports to zero.It was not clear how Israel would stop such shipping activities or whether it would risk direct confrontation at sea with Iranian vessels. The Israeli navy – whose largest vessels are missile corvettes and a small submarine fleet – is mostly active in the Mediterranean and Red Seas.According to maritime experts, Iranian oil smuggling methods have included changing the names of ships or flag registries, switching off location transponders on ships and conducting ship-to-ship transfers offshore and away from large trade hubs.There was no immediate response from Tehran.In addition to stopping Iran from the maritime smuggling of oil, Netanyahu said that the navy would soon also be called upon to protect a gas pipeline stretching from Israel’s offshore natural gas fields, through Cyprus to Greece and further into Europe.“In a few days, the leaders of Cyprus and Greece will come here – with US Secretary of State [Mike] Pompeo – in order to advance the gas pipeline from Israel to Europe via these countries,” he said. “The navy will also protect this pipeline.”Reuters contributed to this report.