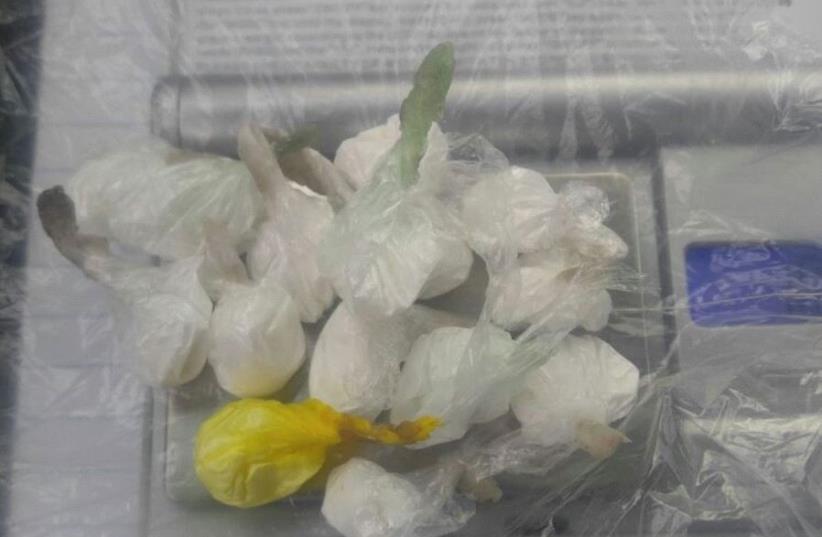 A drug bust by the Israel Police, 2017
(photo credit: POLICE SPOKESPERSON'S UNIT)
Advertisement
Utilizing an encrypted instant-messaging app called Telegram – increasingly favored by drug dealers and buyers to coordinate sales – an undercover police officer’s investigation led to the Tuesday arrests of 23 suspected dealers in and around Jerusalem.Telegram, which features end-to-end encryption and untraceable deleted messages to elude tracking, is also used by ISIS and other terrorist organizations to prevent officials from monitoring their communications to coordinate attacks.The app has more than 50 million users who send approximately 1 billion messages daily, making it exceedingly difficult for law enforcement to keep pace with the rapid flow of information.Police said the raids in Beit Shemesh, Ma’aleh Adumim and the capital – carried out overnight by dozens of officers – are the first successful counter- use of the technology to infiltrate Israel’s increasingly hi-tech drug underworld since seven undercover agents were dispatched last July.“Among other things, the agent purchased drugs such as hashish, cocaine, marijuana, Hydro [an especially potent type of marijuana], MDMA [Ecstasy] and LSD worth hundreds of thousands of shekels,” police said in a statement.According to police, the unidentified undercover agent had to pass an “admission committee” to enter the app’s group that was infiltrated before gaining the dealers’ trust and making a large number of drug purchases through them over several months.“There is no doubt that the activity of the undercover agent and the arrests of the suspects will prevent immediate and direct harm to innocent civilians, and will increase the deterrent capacity of the police in social media,” police said.