Haredi protestors detained in demonstration against arrest of anti-enlistment activists

Radical haredi protestors claim that those who enlist are “professional missionaries with a haredi appearance who sold their souls to Satan for a little bit of money." 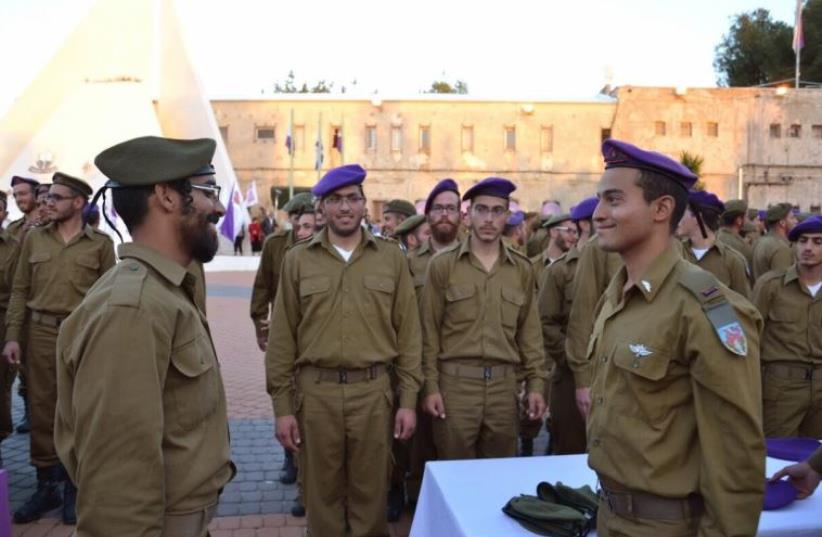 Haredi men enlist in IDF
(photo credit: Courtesy)
Advertisement
Five haredim were arrested outside the Jerusalem Magistrate’s Court on Wednesday for violently demonstrating against the detention of activists involved in a campaign to delegitimize and harass ultra-Orthodox soldiers and those involved in promoting their enlistment.Several dozen men protested against the arrests outside the court house in the Russian Compound neighborhood, some of whom attempted to block access to it. Police broke up the demonstration and arrested five men for disturbing public order and attacking policemen.The previous day, following an undercover investigation, police had arrested three anti-enlistment activists on suspicion of breaking the law for personal privacy and insulting public servants.According to the allegations, the suspects arrested on Tuesday were involved in the campaign directed against haredi youth who enlisted in the military and against those involved in the campaign to encourage enlistment.The printed booklets contained the private addresses, phone numbers and other details of haredi IDF officers and others involved in haredi enlistment while inciting against haredi soldiers.The booklet was titled, “The Hunters: The faces and names of the hunters of souls,” and claimed that “hundreds of haredi recruiters lie in wait for the youth,” describing the recruiters as “professional missionaries with a haredi appearance” who “sold their souls to Satan for a little bit of money.”The end of the booklet features a tombstone “remembering the thousands of fallen soldiers who fell into Netzah [the Netzah Yehuda Battalion, formerly known as Nahal Haredi], Shahar [a haredi hi-tech air force integration program] and Givati [an infantry brigade that includes a haredi battalion], who were captured by vile people, ‘hunters of souls’ who sold their souls to Satan.”The campaign against haredi enlistment has included posters and flyers portraying haredi soldiers as pigs and in other malicious ways.The activists also opened up a “defense” telephone information line in which one of the suspects gave recorded information about the campaign including contact details for haredi IDF personal.The investigation was carried out by the Jerusalem Police fraud unit along with the State Attorney’s Office and the police’s Lahav 433 national crime and corruption unit.During the arrest raids on Tuesday, police seized documents and computers from the suspects at their homes in Modi’in Illit and Bnei Brak.The Jerusalem Magistrate’s Court extended the detention of the three suspects until Sunday.Judge Gabbai Richter said in his decision to extend the detention of the three suspects that “the connection words and actions and the damage that has already been done to these soldiers necessitates the conclusion that the defendants are dangerous.”The names of the suspects are under a publication ban until Thursday morning.The investigation is continuing and more arrests are expected, police said.