The protest happened one day after hundreds of Jewish protesters attempted to prevent another group of Christians from entering the complex. 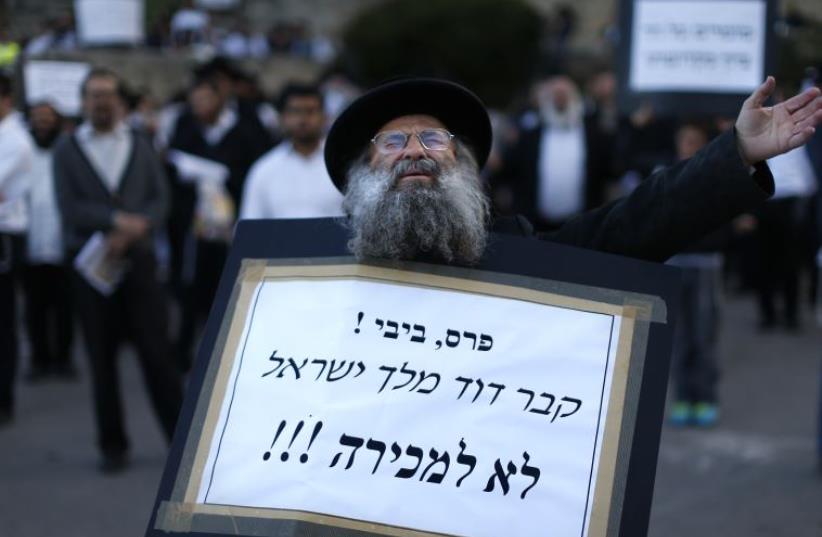 Protest King David's Tomb (The Tomb of King David of Israel is not for sale)
(photo credit: THOMAS COEX / AFP)
Advertisement
Police were summoned to King David’s Tomb in the capital’s Old City on Monday when a group of ultra-Orthodox yeshiva students attempted to block Greek Orthodox Christians from entering the compound for a second consecutive day.The incident took place at roughly 9 a.m. when approximately 20 students who were inside the compound attempted to prevent the Christians from arriving and entering it, according to police spokesman Micky Rosenfeld.“The Christians called police to remove them and units arrived at the scene immediately to allow the representatives to go into the area,” he said. “The group was peacefully dispersed and no arrests were made.”Rosenfeld described the demonstration as a provocation.“This was an unnecessary and provocative step taken by the youths, and police quickly responded to prevent any further incidents from taking place,” he said.The protest took place one day after hundreds of Jewish protesters attempted to prevent another group of Christians from entering the complex housing the sites where Jews believe King David is buried and where Christians believe Jesus had his last supper.On Sunday, the protesters gathered by the site and conducted a mass prayer service and study session in an effort to block access to the building, but according to the police, it ensured that the worshipers were able to gain access and conduct their ceremony.The tomb of King David is in a lower room of the complex, while the site of the Last Supper is in a separate room above.Protests by Jewish radicals have intensified in recent years against Christian services in the complex. The status quo since the establishment of the state has been to allow Christian ceremonies at the site three times a year, including for the Pentecost holiday, which was celebrated by the Orthodox Church on Sunday.Jeremy Sharon contributed to this report.
Sign up for our Christian World newsletter >>