Netanyahu said, however, Israel is in favor of working through “other frameworks,” perhaps with countries in the region. 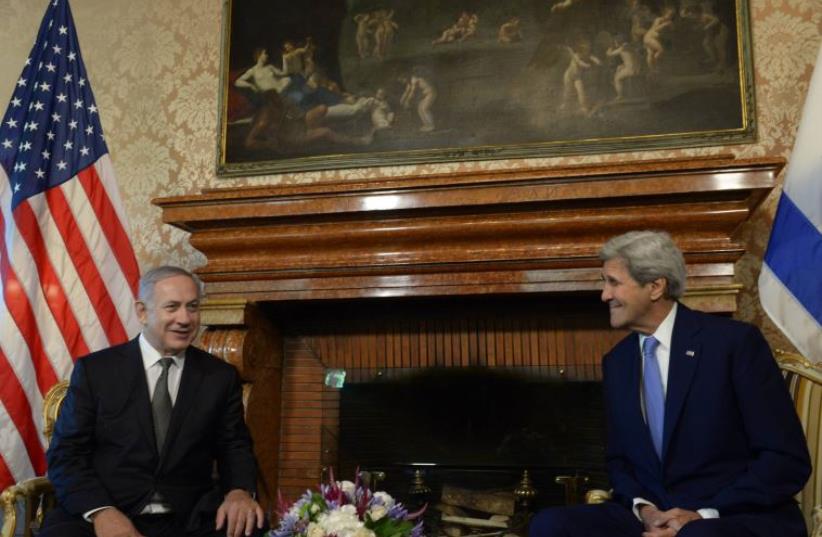 Netanyahu and Kerry meet in Rome in June.
(photo credit: AMOS BEN-GERSHOM/GPO)
Advertisement
Israel continues to view the French diplomatic initiative in a negative light, Prime Minister Benjamin Netanyahu said Monday morning in Rome, following two rounds of meetings there with US Secretary of State John Kerry.A large part of those meetings – one Sunday evening and the other Monday morning – dealt with the Palestinian issue and the various diplomatic initiatives being discussed.Netanyahu said, however, that Israel is in favor of working through “other frameworks,” perhaps with countries in the region, to “promote responsible and wiser diplomatic processes.”Netanyahu, whose meeting with Kerry also focused on the rapprochement with Turkey, said that he discussed with Kerry “how we can advance the process with the Palestinians, difficult though it may be. We discussed regional implications for stabilizing the Middle East, moving into a place where it will be less convulsive.”Prior to the meeting at the residence of the American ambassador, Kerry said that he had already spoken with Netanyahu about a number of issues, specifically relating to “beating back terrorism” and the challenges Islamic State poses to Israel in the Sinai and in the Golan Heights, and “also the challenge of violence stemming from extremism in Gaza and the West Bank.”“Most importantly,” Kerry said, “Israel is, as everybody knows and we reiterate again and again, a critical ally and friend of the United States, and Israel continues to be facing significant challenges. We talked about those, and the ways in which, hopefully, with good effort by all leaders, we can try to change the direction and find a positive way to affect the lives of everybody – Israelis, Palestinians, people in the neighboring countries – and move toward a more stable and peaceful future.”Netanyahu also met in Rome with his Italian counterpart, Matteo Renzi, who – like Kerry – welcomed the accord Netanyahu announced in Rome with Turkey.Renzi said the the agreement would further stability in Europe and the Middle East. The two prime ministers agreed to strengthen bilateral security, economic and cyber cooperation and hold a meeting between their governments later in the year in Israel.Netanyahu, who was scheduled to fly back to Israeli Monday evening, is to meet with visiting UN Secretary-General Ban Ki-moon in Jerusalem on Tuesday.