Ban Ki-Moon said it is “human nature” for Palestinians to react to occupation. 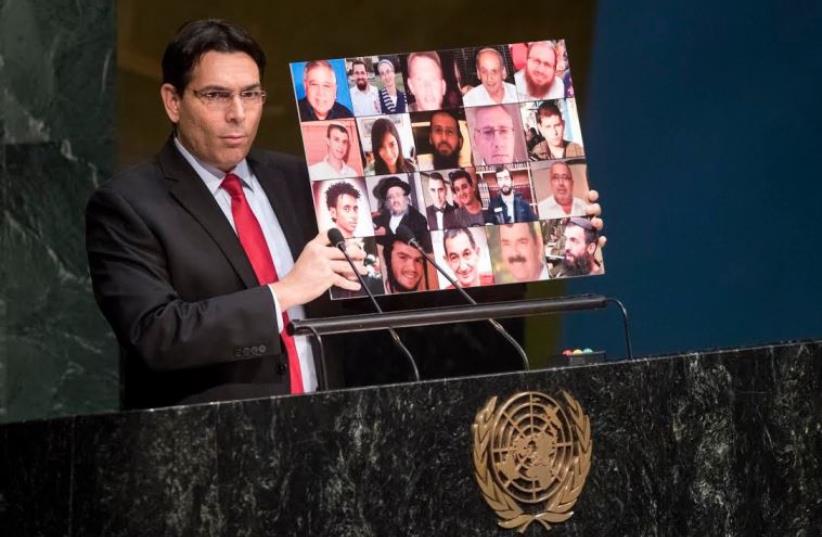 Israel's ambassador to the UN, Danny Danon, holds up a collage of Israeli victims of Palestinian terrorism
(photo credit: UN)
Advertisement
NEW YOR K – Speaking at the UN Security Council on Tuesday, Ambassador Danny Danon said the body has been hypocritical when it comes to Israel and has ignored Palestinian incitement.“During the past four months, Israelis have been stabbed in their homes, shot at in the streets and run over by terrorists using cars as weapons,” Danon told the forum.“During this period of t i m e , the council has adopted 12 resolutions against terrorism, and condemned terrorist attacks in France, Sinai, Lebanon, Mali, Tunisia, Turkey, Iraq, Syria, Nigeria, Burkina Faso, Somalia and Sudan,” he continued. “Not once were the lives of Israelis murdered by terrorists recognized by this council. No condemnation, no expression of solidarity – not even a statement of concern.”Danon spoke about the threat Israel faces from Hamas in the south but also from Hezbollah in the north, which he said “has transformed these villages into terror outposts.”“This is the true face of Hezbollah – a brutal organization that deliberately targets Israeli civilians, and uses Lebanese civilians as human shields. This is the definition of a double war crime,” Danon stated.“Israel has repeatedly warned this council about the threat of Hezbollah, and called for action. Let me say it clearly, once again: Hezbollah is preparing for the next round of fighting,” he said, calling members of the Security Council to take action.“Make no mistake. Israel has the means to defend itself. We will take all necessary measures to protect our people.”The ambassador added that the link between the threats of Hamas and Hezbollah is Iran.“Wherever there is terror, there is Iran,” he said.Danon also mentioned the murder of Dafna Meir, the mother of six stabbed to death in her home in Otniel last week. He pointed out that the 15-year-old who killed her said he had been inspired to do so by programs on Palestinian televisions.“Sadly, when the PA leadership is not negotiating, it is inciting,” Danon stated.He added that the council’s decision to ignore the murder of Meir and the other Israeli victims of terrorism is “no simple oversight.” According to him, it is the direct result of letting cynical political considerations take priority over the lives of people.“The challenge for this council is to chart a new course,” Danon said.“No more business as usual when it comes to terror against Israelis. The fear is the same fear; the pain is the same pain. The response must be the same response.”