Dr. Gershon Pincus had been accepted to work at a naval clinic in Saratoga Springs, but was denied his security clearance because his mother and siblings live in Israel. 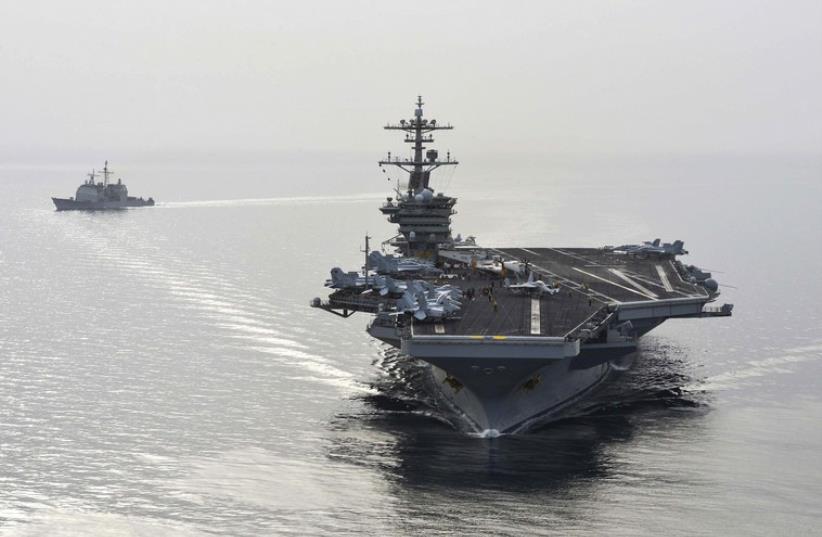 The aircraft carrier USS Theodore Roosevelt (CVN 71) and the guided-missile cruiser USS Normandy (CG) 60 sail in the Arabian Sea, in this US Navy photo taken April 16, 2015
(photo credit: REUTERS)
Advertisement
NEW YORK – Following cases of a security clearance being denied by the US Navy to American Jews having family in Israel, the US representative for New York’s third congressional district, Steve Israel, secured a provision in the Fiscal Year 2017 Defense Appropriations bill that would help stop the bias.Several Jewish organizations had spoken out against the practice back in December after it came to light through the case of a retired dentist, Dr. Gershon Pincus, who had been accepted to work at a naval clinic in Saratoga Springs, but was denied his security clearance because his mother and siblings live in Israel.According to the statement of reasoning provided to him by the Navy, having family in Israel represented a security concern due to “divided loyalties.”Dr. Pincus’s lawyer, Avi Schick, told The Jerusalem Post that dozens of similar cases exist and that the number of clearance denials connected to Israel exceed the number of those related to people with family members in other countries.“My amendment will make the process for security clearance eligibility more transparent without jeopardizing any aspect of our national security,” Rep. Steve Israel said in a statement.The change in the law states that in fiscal years 2016 and 2017, the secretary of defense, in coordination with the director of National Intelligence, will have to submit a report detailing the number of clearance denials along with a list of the countries they are tied to, as well as the number of times each country was cited as the cause for denial.“We need to better understand why so many applicants with ties to an important ally like Israel have been denied in recent years,” Israel said.According to the amendment, the secretary of defense and director of National Intelligence will have to submit the first report to Congress within 180 days of enactment of the bill.