Netanyahu magnified Bennett’s criticism with increasingly harsh responses as the week went on. 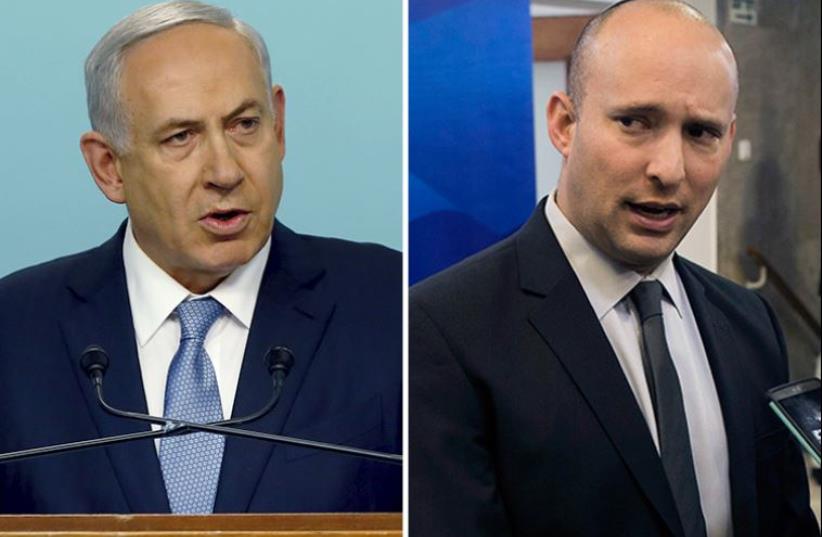 Netanyahu and Bennett
(photo credit: ABIR SULTAN / POOL / AFP,REUTERS)
Advertisement
Prime Minister Benjamin Netanyahu has been pulling out all the stops to make a good impression on US President Donald Trump.He has rolled out a red carpet for him. He rolled a proposal to aid the Palestinians economically through his right-wing security cabinet. Is he also rolling the dice by showing Bayit Yehudi the door on the way out of his coalition? At first glance, it would appear so.Bayit Yehudi head Naftali Bennett started the fight between them a week ago by accusing Netanyahu of not putting enough pressure on Trump to move the US Embassy to Jerusalem and not publicly rejecting the two-state solution since Trump’s election.Netanyahu could have chosen to ignore Bennett and focus on his preparations for Trump.But instead, Netanyahu did the opposite. He magnified Bennett’s criticism with increasingly harsh responses as the week went on.Speaking in the name of “the Likud,” not Netanyahu, the prime minister first accused Bennett of not doing enough as education minister to advance the Right’s agenda. Then, he accused Bennett of copying his press releases.Finally, Netanyahu leaked to Channel 2 that the Trump administration had singled out Bennett as a troublemaker who has crossed redlines. The report even quoted Trump administration officials as saying that Bennett was to blame for the US Embassy not being moved to Jerusalem.Wanting Bennett to leave the government is only one possible explanation for Netanyahu’s behavior, and it isn’t very plausible, because the prime minister has no alternative coalition.Efforts to bring the Labor Party into the coalition did not bear fruit when the party was led by Isaac Herzog, and chances are that in July Labor will elect a leader who will be far less pleasant.Sources close to Bennett would explain Netanyahu’s behavior by accusing him of fearing Bennett, who is making inroads into the prime minister’s political base on the Right.But the most likely scenario is that Netanyahu’s fight with Bennett is part and parcel of his preparations for Trump’s arrival.It has always helped him to have a leader to his Right who looks more extreme than him.If Trump doesn’t like what Netanyahu has to say when he meets with him Monday, he can just say: It could be worse. Listen to what Bennett is saying.With that service Bennett is providing Netanyahu, the prime minister needs him inside his government more than ever.So the fight between Netanyahu and Bennett might look sharp, but don’t expect the prime minister to fire him. And don’t expect Netanyahu to stop criticizing Bennett, especially not when he is on a roll.