Analysis: No political gain to be found

MKs across spectrum had little to spin out of Amona evacuation. 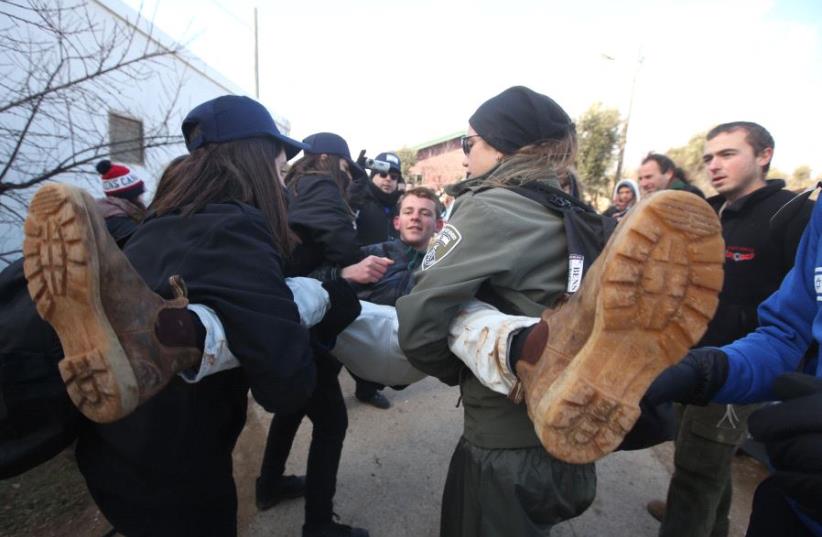 Evacuation of Amona
(photo credit: MARC ISRAEL SELLEM)
Advertisement
The overwhelming majority of the Likud faction signed a petition promising to prevent the evacuation of Amona.Culture and Sport Minister Miri Regev even wrote “Amona won’t be evacuated” on her hand, 11 years after she enthusiastically promoted the 2005 evacuation of the Gaza Strip as IDF spokeswoman.A video clip spread on social media Wednesday of Bayit Yehudi leader Naftali Bennett saying in December 2012 that as an IDF reservist, his conscience would not allow him to evacuate settlements.Nevertheless, Amona’s evacuation began Wednesday and will be completed by Friday, in time for Shabbat.There are times that Knesset members use events for political gain. But almost no one had anything to gain from Wednesday’s evacuation.Prime Minister Benjamin Netanyahu remained silent all day, until his office announced in prime time that a new settlement would be built. Bennett and Regev spoke apologetically in the Knesset plenum.
Amona youth protest ahead of evacuation (Marc Israel Sellem)
“This is an evacuation for legal, not diplomatic, reasons,” said Regev, shifting blame to the Supreme Court, even though her government could have taken extraordinary steps to save Amona and chose not to.Even politicians on the Left had nothing to gain from the evacuation, which opposition leader Isaac Herzog marked somberly at an event in Jerusalem memorializing Dafna Meir, who was murdered by terrorists a year ago.The only politicians who tried to use Amona’s evacuation to their advantage were Labor Party leadership candidate Amir Peretz, who attacked Netanyahu, and rebellious Likud MK Oren Hazan, who came to the outpost to protest its removal and mock MKs from Bayit Yehudi.“Netanyahu ate the stinking fish of the [settlement] regulation bill, compensated the settlers with thousands of housing units and millions of shekels, and still was compelled to evacuate Amona residents by force,” Peretz said. “There is no clearer example of the failure of Netanyahu and his inability to lead.” Despite Hazan on the Right and Peretz on the Left, Amona will go down as an incident that the overwhelming majority of politicians would prefer to forget and as a human tragedy that could have been avoided if anyone had an interest in taking action.As the ultimate political hot potato, anyone whose hands touched Amona was burned badly, leading to the mashing of that potato, which took place Wednesday.