The many critics of the deal had plenty to dislike in the imperfect gas outline, which by admission of even its most ardent supporters was a compromise. 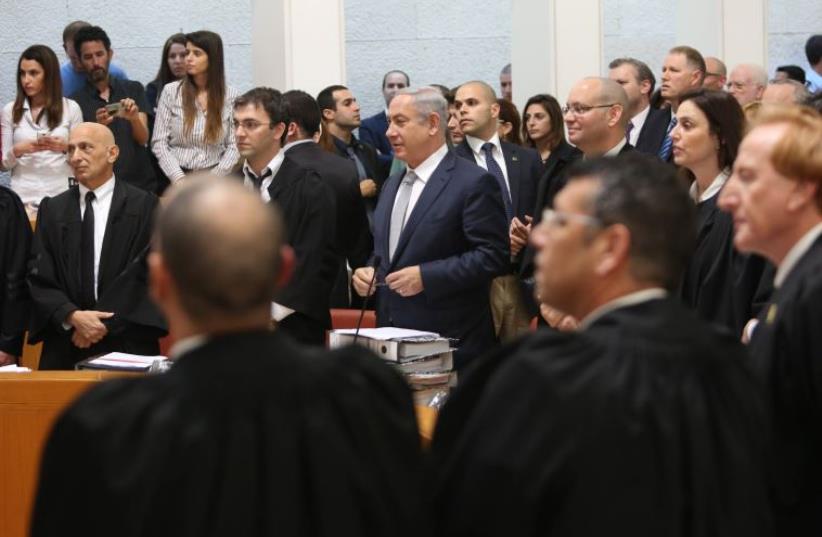 Prime Minister Benjamin Netanyahu addresses the High Court on the gas deal
(photo credit: GIL YOCHANAN/POOL)
Advertisement
Opponents of the government’s plan to regulate Israel’s natural gas reserves cheered Sunday’s surprise High Court decision kicking the plan back to the government for revision.But the way things are set to advance, they shouldn’t be so quick to celebrate.The many critics of the deal had plenty to dislike in the imperfect gas outline, which by admission of even its most ardent supporters was a compromise. It didn’t do enough to promote competition, lower the price of gas locally, or create enough new infrastructure or redundancies.Sunday’s ruling, however, is unlikely to change any of that, and may add new elements to the deal that will further rile its opponents.The court did not touch Prime Minister Benjamin Netanyahu’s first-ever use of Article 52, which sidestepped objections from the Antitrust Authority on national security grounds, nor did it rule any of the other elements of the deal illegal.Barring new elections, the results of which might not favor opponents of the current deal, the much-maligned elements of the deal are likely to remain, save the stability clause.“Contrary to reports and comments that are largely political, I believe the High Court decision paves the way for the ratification of the gas outline,” said Tamir Fishman Investments CEO Eldad Tamir.The stability clause in question would prevent future governments from altering their regulatory policy over the course of ten years.Given that the gas from Leviathan was only expected to start flowing around 2020, however, it would have only had practical implications for about five of those years.Without the stability guarantee, however, many analysts believe the government will have to make some sort of other concession to keep the companies in the game, In other words, they might have to put taxpayer money on the line to ensure stability, a move unlikely to succor those decrying the plan as a giveaway to tycoons.“Giving such guarantees is customary in international business and especially in places where the government intervenes in the free market,” Tamir said, citing tax exemptions for high-tech firms or guarantees for small businesses as examples.Dr. Amit Mor, CEO of consultancy Eco Energy, agreed. “The problem isn’t just the companies but the financial institutions. The banks that finance them who are very concerned about the stability,” he said.To satisfy both the companies charged with getting the gas out of the ground and their financial backers, the government could commit to buying a certain amount of gas if the companies fail to sell it at a set price on the free market, provide loan guarantees, promise to cover certain expenses, or even provide incentives for potential gas buyers abroad.The last option may be important for securing export deals, which the companies see as crucial for speeding up the return on their investments, and the government sees as an important way to bolster Israel’s ties with its neighbors.“Any delay of the development of additional gas sources in Israel such as Leviathan and [the two smaller reserves] Karish and Tanin may have negative implications on the strategic and national security aspects of securing the energy supply to the nation,” Mor said. Potential deals with Turkey, Egypt, and Jordan will have to wait.Currently, he noted, more than 50% of the country’s power is generated by gas from one field and piped into the country through one pipeline.“Any technical problems or a security breach will cause a situation in which both Israel and the Palestinians will sit in the dark. Thus there’s an urgent need to overcome the regulation issue and finalize a scheme in which those fields will be developed,” he added.It is unclear just how long the latest hiccup in the long, bumpy road to extracting Israel’s natural gas will delay the addition of Leviathan’s gas to Israel’s market, but all of that time will be spent in the truly monopolistic situation of having just one supplier, Tamar.The Kibbutz Industries Association on Sunday said every month of delay in producing new gas costs them millions of shekels in production outlays.Prime Brokers called the decision a red flag for foreign investors into Israel.“The economic uncertainty the High Court decision caused is not good for the local market, which even without elections is struggling to grow,” the group wrote.None of this is to say that the court should have ruled differently in order to accommodate Israel’s business interest. Quite the contrary, it is the job of the court to impartially determine the legality of government policies, and its decision to overturn the policy is an important reminder of Israel’s strong democratic institutions. Blame lies, perhaps, with the government for including a potentially illegal step in their policy.But just because the court ruling slowed the implementation of a deal disliked by many, its results should give the critics very few reasons to cheer.