The meeting took place at the annual iftar dinner hosted by President Reuven Rivlin on Monday. 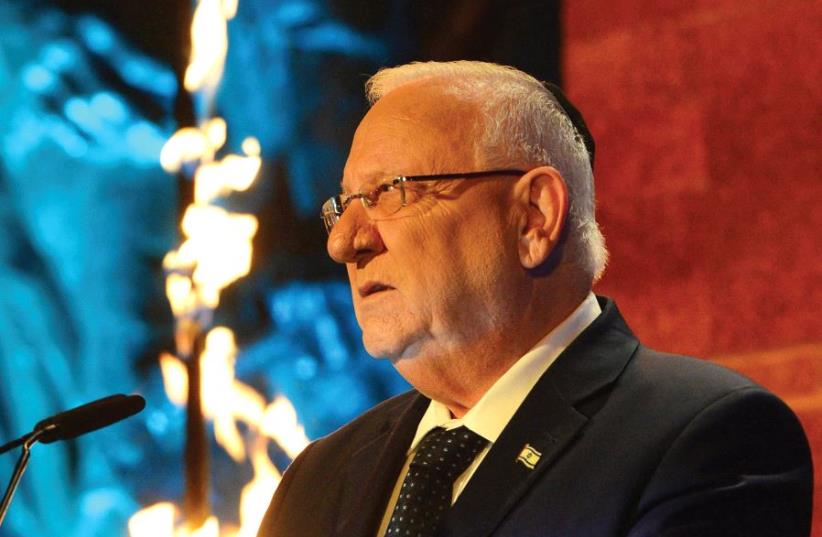 PRESIDENT REUVEN RIVLIN addresses the Holocaust Remembrance Day opening ceremony at Yad Vashem on Sunday
(photo credit: MARC ISRAEL SELLEM)
Advertisement
At an annual iftar dinner hosted by President Reuven Rivlin on Monday, Arab leaders appealed for his help in fighting crime in their communities. Sheikh Abed al-Hakim Samara, head of the Sharia Court of Appeals, said nearly all Arab citizens feel their personal safety is at stake, while armed criminal gangs roam the streets. More than 30 people have already been killed this year; gangs also have access to weapons; and they traffic in narcotics and women, he said.The police – who are supposed to protect all the citizens of Israel – Samara charged, do not respond to calls from the Arab community. Their lack of action with regard to recent events in Kafr Kassem has eroded all trust in the police, he said. “We are losing confidence in law enforcement.” Samara warned of a dangerous and growing phenomenon in which some young people have taken the law into their own hands and carry weapons in order to defend themselves – by themselves. “That’s very dangerous,” said Samara. “We can’t agree to have armed civilians roam the streets.” Unless something drastic is done to relieve these people of their weapons, he cautioned, their lawlessness could spill over into mainstream Israel.“We want you to act immediately,” Samara urged Rivlin. “We want you to do it through the Prime Minister’s office.”At the same time, he said, Arabs must stop blaming others for their misfortunes. “We must educate our children in universal values.”A similar appeal was voiced by Sakhnin Mayor Mazen Ganaim, chairman of the Committee of Arab Municipal Authorities, who said that violence is triumphing and arms are plentiful in the Arab communities. “The illegal arms in Arab villages must be confiscated and we will help you,” he said.Ganaim commended Rivlin for having called Kafr Kassem Mayor Adel Badir to ask how he could help. “I don’t think too many presidents would act as you did,” said Ganaim.Rivlin said that violence could not be uprooted without complete cooperation between the police and the leaders of the Arab communities. He insisted that it was indeed the duty of the police to provide security for every citizen including Arabs.It was not an easy time, Rivlin said, and the eradication of violence is a challenge that must be met by the government, police and Arab leadership.In discussions with the chief of police and with Arab leaders, Rivlin said he had detected a willingness – on both sides – to move forward. Despite all the difficulties involved, he urged everyone to put aside their suspicions of each other and to work towards building mutual confidence and cooperation.Another meeting between the police and Arab leaders will soon be held shortly at the President’s Residence, Rivlin said.