As budget debates near, MKs call for special focus on defense 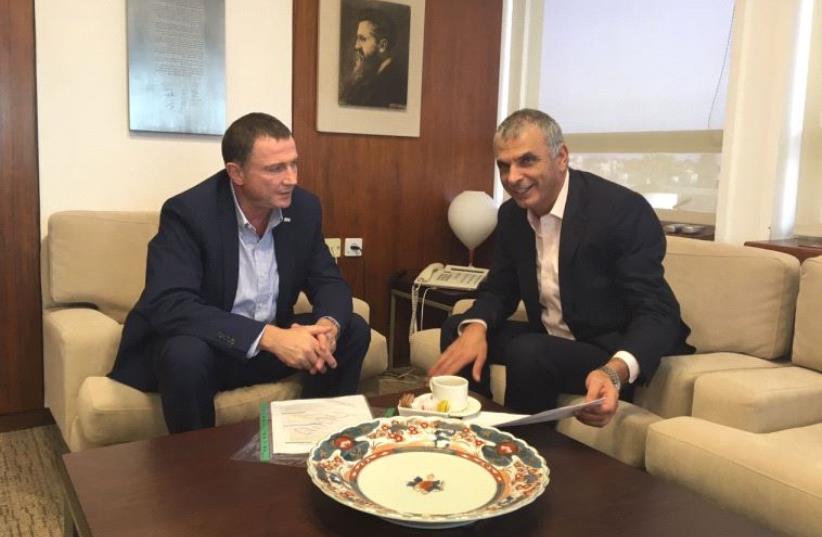 Yuli Edelstein and Moshe Kahlon
(photo credit: Courtesy)
Advertisement
Defense issues need to be discussed separately from the mammoth Economic Arrangements Bill, MKs Ofer Shelah (Yesh Atid) and Omer Bar-Lev (Zionist Union) said on Monday night.The lawmakers wrote a letter regarding their argument to Knesset Speaker Yuli Edelstein and Knesset Foreign Affairs and Defense Committee chairman Avi Dichter (Likud) two weeks before the Knesset’s winter session is set to begin, and before discussions on the 2017-2018 budget begin in earnest in the legislature.The economic arrangements bill – passed in tandem with each budget – outlines the basic economic policies that are meant to accompany it. It is usually very long, and often features articles that have little to do with the budget.The length of the bill and the size of the defense budget have been much-debated issues in every state budget in recent years.Shelah and Bar-Lev said that four defense-related items in the bill require special attention: Implementing recommendations relating to disabled IDF veterans, shortening mandatory service by two more months beginning in 2020, new retirement procedures for career military officers and the principles on which the defense budget will be based.“Questions like who will be recognized as a disabled IDF veteran or the ability of the system to deal with shorter mandatory service or changes in military careers have a significant public influence that are worth a separate, complete and detailed discussion,” they wrote.These are fundamental issues, they added, and some are controversial, such that if they are going to be passed as law, there should be an open discussion with public representatives and a range of opinions. This cannot happen under the “rotating sword of the requirement to authorize things by the end of the year,” they wrote, referencing the threat that chased Adam and Eve out of the Garden of Eden.“Our goal isn’t to delay or cancel legislation,” the MKs said. “We think that these things need to be passed as laws as soon as possible, but not in the well-known and disliked framework of the economic arrangements bill, that even the Knesset legal adviser criticizes.”Last week, Edelstein and Finance Minister Moshe Kahlon participated in the usual ritual between the holders of their positions when a budget is set to reach the Knesset, by which the former complains that the bill is too long, and the two reach a compromise.This time, the compromise came over a month after Edelstein sent Kahlon a letter citing Knesset Legal Adviser Eyal Yinon’s lament that the current draft of the bill includes dozens of articles that amend existing laws in many areas, many of which lack a direct connection to the budget, as well as a number of complex and controversial economic reforms, and that the time lawmakers have to prepare the budget and the bill – essentially just November and December, unless the government requests an extension until March – is too short to approve the draft he saw.Edelstein and Kahlon said they were able to shorten the bill after weeks of “intensive discussions,” allowing focused discussion of 30 articles that will be legislated separately. However, Kahlon’s flagship economic reforms, including in the media market, cost of living, welfare, health, employment, defense, energy and taxation, remain part of the bill.“The understandings we reached allow us to continue leading an uncompromising policy of increasing competition in the market, closing social gaps, reducing the tax burden and increasing growth… strengthening the Israeli economy and benefiting the public while protecting the Knesset’s status,” Kahlon said.Edelstein said he’s glad they were able to shrink the bill so Knesset committees can have an appropriate discussion of each issue, and called on the government to learn the lesson and not submit a behemoth bill next time, but instead one that only includes topics that have a clear connection to the state budget and economic growth.