The beginning of a new collaboration between the two allies. 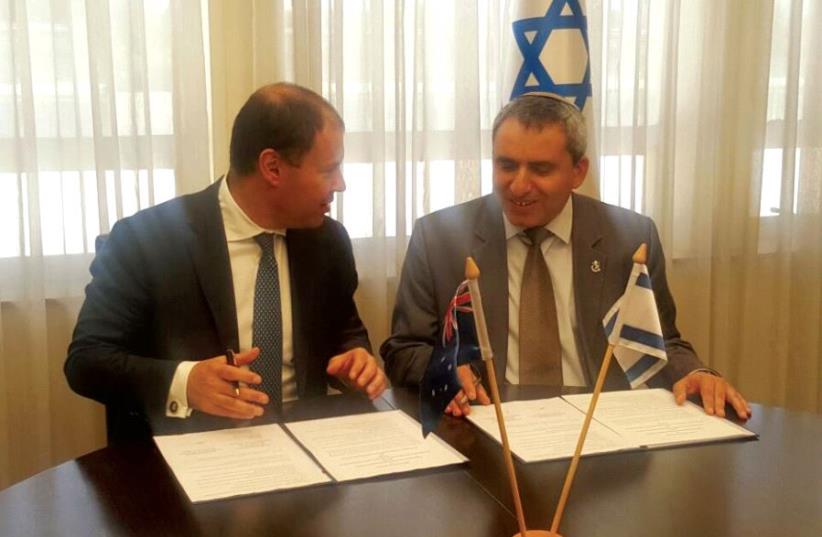 ENVIRONMENTAL PROTECTION MINISTER Ze’ev Elkin (right) and his Australian counterpart, Josh Frydenberg, sign a declaration of intent for cooperation on environmental issues yesterday at the ministry
(photo credit: MINISTRY OF ENVIRONMENTAL PROTECTION)
Advertisement
Sometimes even the closest relationships can be taken to the next level. That’s certainly what Josh Frydenberg, Australia’s energy and environment minister, hoped to achieve during his recent three-day trip to Israel.As a follow-up to Prime Minister Benjamin Netanyahu’s trip to Australia in February, Frydenberg traveled across the country with a delegation of senior clean-tech entrepreneurs to explore what makes the start-up nation tick.In his series of meetings, the minister found that when it comes to cybersecurity, solar technology, drone technology and agriculture innovation, Israel is the place to be.“Whether it’s cybersecurity, agriculture innovation, water treatment or solar technology, there are enormous opportunities,” Frydenberg told The Jerusalem Post while attending a networking event for Australian and Israeli start-up execs in Tel Aviv Monday night.“This is a natural home for us, a natural place to do business. So we think this is the start of something really special, and we look forward to building with Israeli companies not only in the next few weeks, but years,” Max Cunningham, the Australian Stock Exchange’s general manager listings and issuer services, told the audience.As a representative of a country with a growing solar industry, Frydenberg marveled at the Negev’s Ashalim Solar Thermal Power Station – the tallest solar tower in the world – and its 121 megawatts, which has the potential to power 120,000 homes.“It’s a remarkable project that offers very important lessons for Australia as we contemplate our own solar thermal project, as we don’t currently have one,” Frydenberg said.On the environmental front, on Tuesday Frydenberg signed a declaration of intent with his counterpart, Ze’ev Elkin. The declaration calls for cooperation on a variety of environmental issues, including sewage treatment, river rehabilitation, waste, air quality, greenhouse gas emissions, climate change, nature conservation, biodiversity, coastal preservation and energy production and efficiency, according to Israel’s Environmental Protection Ministry. Also critical to the partnership will be an exchange of information between the Australian and Israeli environmental authorities and the promotion of joint projects, the ministry said.“Both countries have unique knowledge, and both can benefit greatly from the integration of forces,” Elkin said. “The two environment ministries will establish work teams to promote joint projects, with an emphasis on waste, improving air quality in cities and coastal erosion.In addition, we will work together in order to help Israeli environmental technology companies advance collaborative projects.”Australian Ambassador to Israel Dave Sharma pointed out that this kind of cooperation will take the already warm relations between the two nations to the next level.“For many reasons, the stars have aligned between Israel and Australia and I think we started a new chapter,” he said.To help matters, unlike in Europe, the Boycott, Divestment and Sanctions movement hasn’t gained traction in Australia. Although Frydenberg attended a counter- demonstration outside of Max Brenner in Melbourne in 2011, by and large, BDS is only popular among the fringe Left.“I’m proud to say the Australian government and Australian opposition stand together against the BDS campaign.Fortunately, it hasn’t gotten widespread traction in Australia, but that is not to say we don’t need to be continually vigilant,” Frydenberg said.As a Jew, Frydenberg’s visit here took on personal significance.A descendant of Holocaust survivors on both sides of his family, his visit to Yad Vashem was a moving experience for him.“The Holocaust is at the heart of Jewish identity. It’s the most tragic chapter in recent Jewish history. But at the same time, the Jewish people’s survival is the most stunning testament to the community’s resilience and inner strength,” he said. “And Israel, which was born from the ashes of the Holocaust, is a daily reminder of how important it is for the Jewish community around the world to see Israel prosper and survive.”Frydenberg has enjoyed an impressive ascent in Australian politics. As Liberal party representative of the Kooyong division in Victoria, he has risen up the ranks in both the Abbott and Turnbull governments.When asked about future political ambitions, Frydenberg remained humble and coy, without divulging many details. “You want to be the best you can be. I’ve been fortunate that after three years in opposition, my party won government and I was given opportunities by two prime ministers to undertake a fascinating portfolio and responsibilities,” he said.“I have my hands full with energy and environment as we undertake significant transformation with wind and solar power and the challenges that brings.”