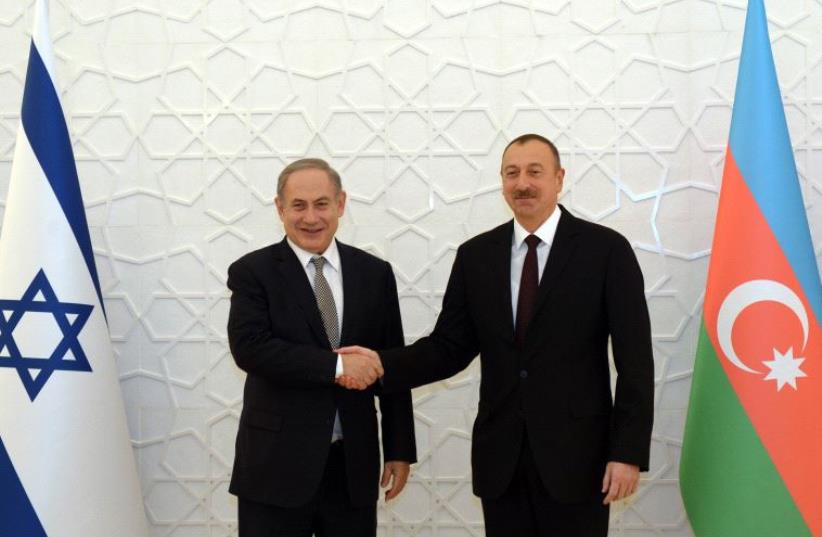 Netanyahu with Azerbaijan President Ilham Heydar Oghlu Aliyev
(photo credit: CHAIM ZACH / GPO)
Advertisement
WASHINGTON – A US-led summit gathering Israel’s prime minister and the Palestinian Authority president on one stage with Levant and Gulf leaders would greatly benefit the region, and likely advance a stalled peace process, Azerbaijan’s envoy said in an interview with The Jerusalem Post.Israeli officials told the Post last month that the Trump administration is exploring the feasibility of such a summit, which would bring Israel and Sunni leaders from Saudi Arabia and neighboring nations together for the first time.Egypt and Jordan are reportedly on board with the initiative, as long as Israel informally freezes settlement activity outside of established blocs, the officials said.Elin Suleymanov, who sat down for a discussion shortly after speaking at the American Israel Public Affairs Committee’s annual conference, acknowledged Baku’s limited role in the storied Middle East peace process.But as an ally of Israel with warm diplomatic ties around the Muslim world, the Azerbaijani government sees itself as a potential voice of encouragement, if not one with much leverage.A regional summit hosted by the Trump administration would be a “great idea,” the envoy said in a wide-ranging discussion at Azerbaijan’s embassy in Washington.“There seems to be some growing relationship between Israel and the Gulf states,” Suleymanov said. “The Trump administration wants to see a more regional approach, and I think that’s right – it’s the way it should be.”The ambassador spoke positively of President Donald Trump, characterizing him as a refreshing departure from the previous administration. Trump, he said, is a more practical figure than Barack Obama, and thus may be better positioned to create a friendlier environment for a peace process.“The previous administration, I believe – with all due respect to my good friends – had been somewhat ideological. And for the last eight years it hasn’t been the easiest time in our relationship,” Suleymanov said, describing the US-Azerbaijani relationship as a strategic one focused on counterterrorism, energy and the challenges posed by Afghanistan and Iran. “When you put your views over the reality, and prefer to believe in something that should be happening whether its the reality or not, then strange things happen.”“It doesn’t work, that’s the reality,” he added. “And to superimpose your views onto others – it never works.”Baku was thought to have been cozying up to the incoming administration over the holiday season, when it chose to host a Hanukka Party at Washington’s new Trump International Hotel along with the Conference of Presidents of Major American Jewish Organizations. But the impression was misleading, and the lede from the party was buried, Suleymanov said. It was a rare event that featured both envoys from Israel and the PA , who appeared cordial away from the view of cameras.“Our real leverage over both sides is very limited, but we are here to help,” he said. “We’re happy to see this. The sooner you see peace, the better it is.”Azerbaijan’s strong relationship with Israel caught media attention during some of the most heated years of the Iran nuclear crisis, when Israeli officials contemplated how to successfully strike targets of its nuclear program without having to return its planes back home for refueling. Reports surfaced that Israel was coordinating with Baku on contingency military plans.But the bilateral relationship extends well beyond the issue of Iran, Suleymanov said.“Practicality is a lot of our relationship with Israel – it’s very tactical, it’s pragmatic and it’s reality-rooted,” Suleymanov added. “Your survival depends on how well you understand your reality.”The relationship has long focused on defense, but Israel and Azerbaijan have in recent years been lending other skills to one another: Israel is teaching Azerbaijan some of its information technology capabilities, while Azerbaijan has been helping Israel develop its oil and gas industry. The two nations also work on educational initiatives, Suleymanov said.As the only nation neighboring both Russia and Iran, Azerbaijan is a critically located partner for both the US and Israel – and has unique perspective on the regional ambitions of both former empires. Suleymanov did not know whether it was fair to characterize the Iranian government as one with hegemonic ambitions, but said he is confident individuals within the government are working to expand the country’s influence beyond its borders.To that end, the nuclear deal brokered by Iran and international powers was of great benefit to Tehran, he said.“They can say: At the end of the deal, we have achieved what we wanted,” Suleymanov said. “So now the question is – if you undo the deal, what’s the goal? What can be achieved?” He noted that Israel broadly accepts Baku’s claim over the territory of Nagorno-Karabakh, a region that has been the subject of conflict between Azerbaijan and Armenia since the fall of the Soviet Union.“The Israelis support Azerbaijan’s territorial integrity – what the Israelis are doing is recognizing the chain,” Suleymanov said. “You have territorial integrity issues today in Ukraine, in Georgia, Moldova and in Azerbaijan. They’re all very similar, to be honest. It’s an occupation of territory, controlled by someone else, in violation of sovereignty.“The fact that the Israelis understand that is good,” he added.