In a statement on the Balad party’s Facebook page on Monday termed the investigation “political persecution against the Arab public and its parties.” 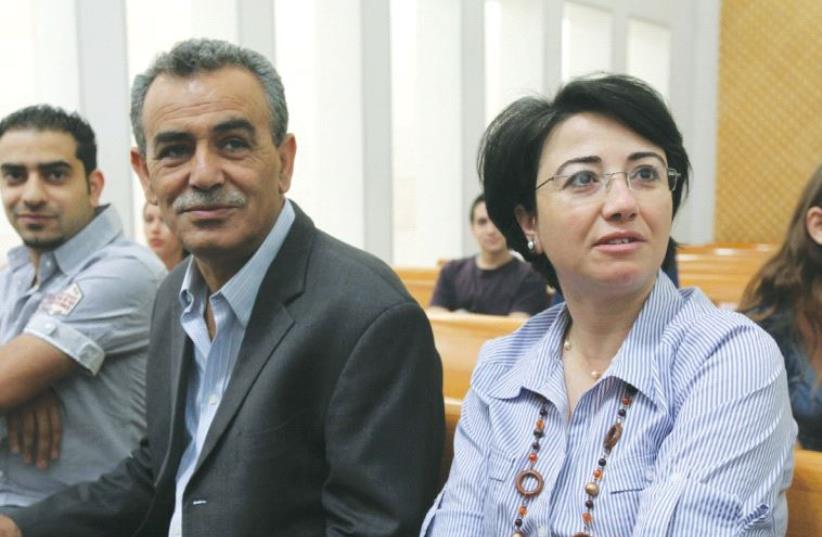 MK HANEEN ZOABI (right) sits with MK Jamal Zahalka at the Supreme Court in Jerusalem in May 2012.
(photo credit: MARC ISRAEL SELLEM/THE JERUSALEM POST)
Advertisement
Police questioned Balad MKs Haneen Zoabi and Jamal Zahalka on Monday as part of an ongoing fraud investigation into the party’s campaign financing, a police statement said.In response, Balad leaders alleged that the questioning is the latest part of a politically motivated campaign to cripple the party, largely because of its advocacy of transforming Israel into a “state for all its citizens” rather than a Jewish state.The questioning comes after the arrests last month of at least 36 party leaders and activists, many of whom were taken into custody by large numbers of police between 2 a.m. and 4 a.m. Seven people remain under house arrest, according to Mtanes Shehadeh, the party’s secretary general.Police suspect Balad officials of fraud, forgery and money laundering involving millions of shekels and attempting to conceal the source of illegal funds, the statement said.Police allege that money was smuggled from Jordan to Israel to finance Balad party municipal and Knesset election campaigns in 2013.Before her questioning, Zoabi said at a demonstration outside the offices of the Lahav 443 investigations unit in Lod that the entire matter should have been handled by the state comptroller without arrests. There was, she said, “perhaps a breach of the party funding law that doesn’t require a police investigation and arrests and that could have sufficed with an investigation by the state comptroller. Had it been Jewish activists there wouldn’t be a police investigation, arrests and extension of arrests.”“We will block the political persecution and emerge stronger,” Zoabi said, as protesters held up signs saying “3,000 police for political persecution and 30 police to fight crime and violence,” a reference to allegations that police try to thwart Arab political activity but do nothing to stop spiraling violent crime in Arab areas.The police deny those allegations and have said repeatedly that the investigation into Balad is professional, not political.Whoever is right, the fresh controversy involving Balad, coming at the same time as recriminations over the Joint List MPs refusal to attend the funeral of Shimon Peres, appears to be increasing distrust between the Jewish majority and the Arab minority.On Sunday, Prime Minister Benjamin Netanyahu said he would support a boycott of Joint List MKs in response to their staying away from the funeral. This would involve absenting himself from their speeches.“We are at one of the low points. The fissure is getting deeper,” MP Zuheir Bahloul (Zionist Union) told The Jerusalem Post.Police said last month that arrests were “based on the suspicion that senior and active members of Balad, together with the many others, including lawyers and accountants, conducted in recent years a mechanism to systematically misrepresent the origin of millions of shekels that were introduced to party funds and were used to finance its operations.’’ Shehadeh denied those allegations.“If there were any imprecisions or mistakes, the place to deal with it is the state comptroller, as is done with other parties,” he said.Shehadeh, who took over as chairman two months ago and has not been questioned, charged that Zahalka and Zoabi were summoned “to continue the work of frightening our public from political participation and deterring political parties.”The arrests, which included senior party leaders, town councilors and activists, had damaged the party initially, he said, adding: “It was disruptive because the numbers of those arrested were really high, and those who had been arrested were forbidden from contacting each other. It was a little difficult to manage the party in a normal way, but we have managed to continue to work. We have fantastic young people who help us and we manage.”Balad is uncompromising in its opposition to the Zionist ethos of the state and argues that Israel cannot be democratic as long as it defines itself as a Jewish state. Its MKs have been embroiled in controversies for acts seen by the Right as provocative and disloyal.Shehadeh charges that the government has had a goal of “eliminating” Balad for years because “we confront it with a serious political challenge, in that we strive for a state of all citizens, democratic, and with one hundred percent equality.”The party has been controversial since its inception.Party founder Azmi Bishara fled Israel in 2007 while under investigation for allegedly passing information to Hezbollah a year earlier during the Second Lebanon War. He now lives in Qatar, where three Balad MKs met him in August 2014 during the Gaza war. Last February, Balad MKs were suspended by the Knesset ethics committee after they met with families of Palestinians slain while carrying out attacks and observed a moment of silence for them in the Knesset.More recently, Balad MK Basel Ghattas triggered an uproar with an outburst against Shimon Peres while he lay in a medically induced coma. “Peres is covered in our blood from head to toe,” he wrote on Facebook. “We are not rushing to participate and contribute to the tribe’s collective festival of grief and loss.”The summoning of Zoabi and Zahalka for questioning comes nearly a year after authorities outlawed the northern branch of the Islamic movement, saying it threatened public order, incited to violence and cooperated with Hamas. At the time, leaders of Arab-Israeli citizens labeled the action a political step and predicted it would pave the way for moves against other groups.Balad has received strong support from a broad range of Arab politicians. Mohammed Barakeh, head of the Higher Arab Monitoring Committee, said yesterday, “They are trying to delegitimize not only Balad, but all of the Arab society.”But coalition MPs put the blame on Arab political leadership for the heightened tensions, and say that staying away from Peres’s funeral by the Joint List indicated that they were interested in polarization, not coexistence.