According to Ban’s office, during the meeting he stressed the need for both Israel and the Palestinians to “restore a political horizon toward a peaceful two-state solution.” 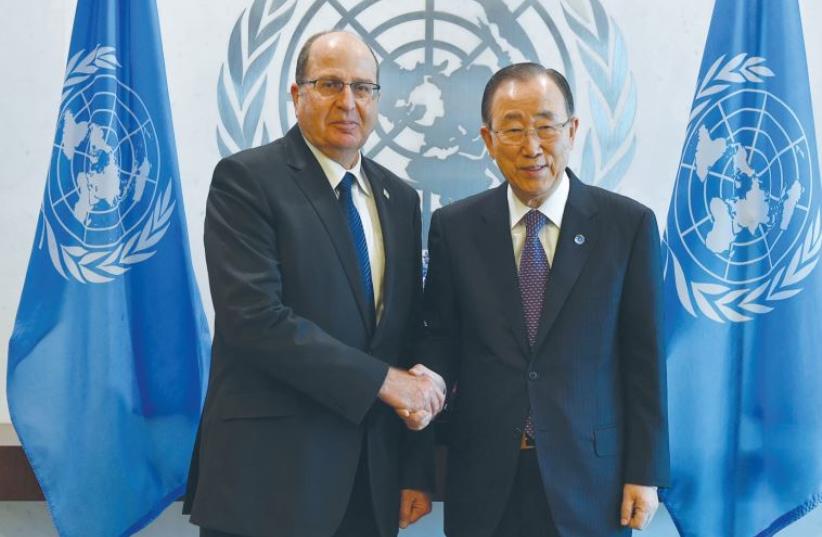 UN SECRETARY-GENERAL Ban Ki-moon receives Defense Minister Moshe Ya’alon in New York
(photo credit: ARIEL HERMONI / DEFENSE MINISTRY)
Advertisement
NEW YORK – Defense Minister Moshe Ya’alon met with Secretary-General Ban Ki-moon at UN headquarters in New York on Tuesday.According to Ban’s office, during the meeting he stressed the need for both Israel and the Palestinians to “restore a political horizon toward a peaceful two-state solution.”Ban also said he believes there is a need for “substantial policy changes on the ground” and told Ya’alon he encourages Israel to take “significant steps” in line with calls by the Middle East Quartet, that would “strengthen Palestinian institutions, economic and security prospects, while respecting Israel’s legitimate security concerns.”Ban also expressed concern regarding Israeli citizens held in Gaza, and urged the return of the bodies of soldiers Hadar Goldin and Oron Shaul to their families in Israel.Ya’alon’s office said the defense minister on Wednesday also briefed the ambassadors of the member states of the UN Security Council, during a meeting led by Israeli Ambassador Danny Danon. Ya’alon discussed security challenges on the global level as well as those facing Israel during its ongoing wave of terrorism.The purpose of the briefing, Ya’alon’s office said, was to inform the diplomats about the complex reality in Israel and enhance relations between Jerusalem and the wide variety of countries on the Security Council.Ya’alon met with Secretary of Defense Ash Carter on Monday in Washington for a discussion of the US defense package to Israel for the coming decade. Ya’alon said he found a highly receptive ear in Washington to Israel’s changing security needs.“Relations with the US are a cornerstone of our national security, and Secretary of Defense Carter is a true friend,” Ya’alon said. “I was pleased discover a great understanding for our security needs in light of the changing reality in the region.”Yaakov Lappin contributed to this report.