‘During my schooling in the 1970s, stories from this region were of central importance,’ says Karl Ove Knausgård 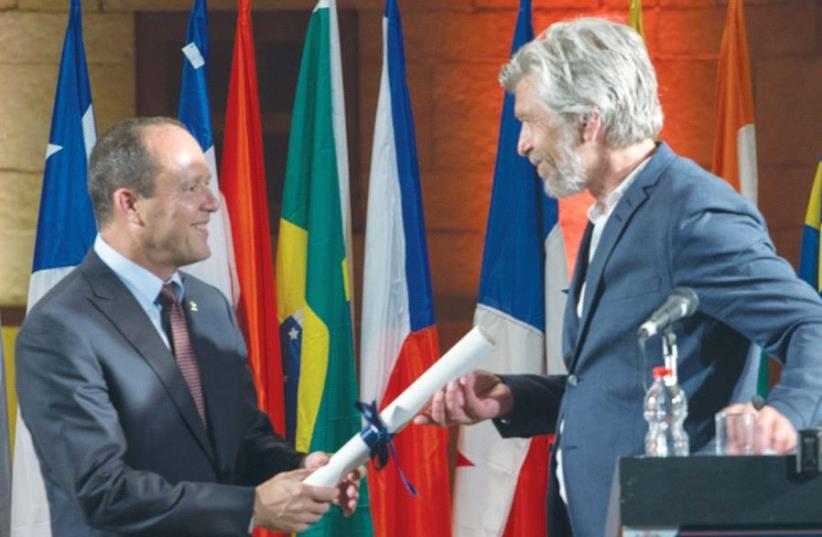 JERUSALEM MAYOR NIR BARKAT awards Norwegian author Karl Ove Knausgård the 2017 Jerusalem Prize.
(photo credit: DAVID SAAD)
Advertisement
Jerusalem Mayor Nir Barkat on Sunday awarded Norwegian literary sensation Karl Ove Knausgård with the Jerusalem Prize, which coincides with the opening of the capital’s four-day 28th biennial Jerusalem International Book Fair.Dozens of authors from Israel and abroad, as well as some 300 international publishers and Israeli publishing houses, will take part in the fair, which has been held every two years since 1963 to connect publishers, editors, agents and scouts to Israeli authors.For the first time, it will take place in conjunction with Hebrew Book Week, and in collaboration with the Publishers Association, to encourage dialogue between Israeli and international publishers.Prior to presenting the award to Knausgård, 48, whose autobiographical series of six novels titled My Struggle became an international sensation, Barkat noted the books’ indelible mark on modern literature.“Mr. Karl Ove Knausgård, you are already a world-renowned author, and there is no doubt in my mind that the books that you will be writing will continue to be out-of-thebox thinking,” said Barkat to a packed auditorium at the Jerusalem YMCA.“I know that one in 10 Norwegians have your books at home, which have been translated into 22 languages... so we are very proud that you were selected to win the Jerusalem Prize this year.”Noting previous laureates, and his early interest and education in biblical studies, Knausgård said he was honored to receive the award from a city he has long studied and been fascinated by.“The list of previous recipients reads like a catalogue of writers who I admire, who have inspired me, and who I have learned from,” he said.“Jerusalem is a city that houses perhaps the most transformative and defining texts known to us. I grew up in Norway, a country which geographically, politically and culturally is a world apart from the Middle East. However, during my schooling in the 1970s, stories from this region were of central importance.“In the classroom,” he continued, “we had three maps: One of Norway, one of the world, and one of biblical Israel.We were as intimately familiar with Mount Sinai, Carmel, Jericho, the Sea of Galilee and the Dead Sea as we were with the landscapes surrounding us. And the tales from the Bible were as important to us as our own history.”Indeed, Knausgård attributed the story of the ancient Israelites with inspiring his “emotional world with lessons on being human.”