Bennett on PM-Obama meeting: Support for two state solution is a historic mistake

Education minister calls to “plan for the age after a Palestinian state and think about what is in the Israeli interest.” 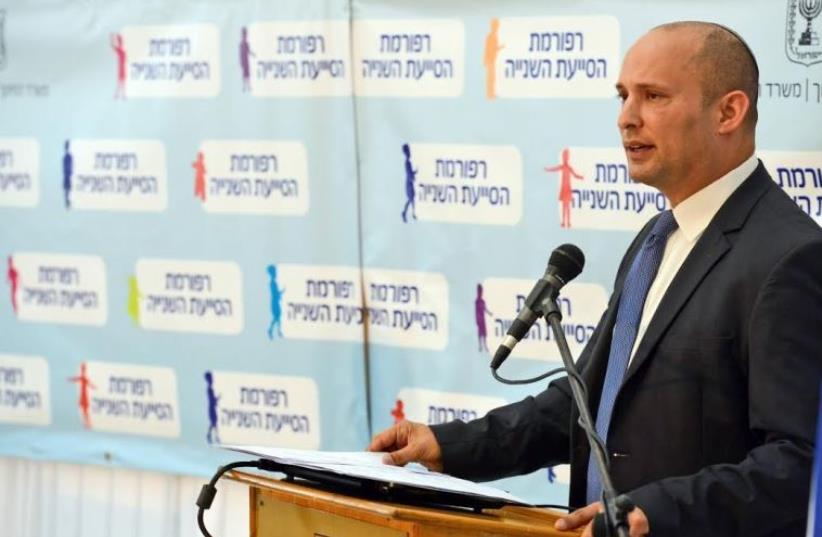 Education Minister Naftali Bennett at a press conference, June 8, 2015
(photo credit: HAIM ZACH/GPO)
Advertisement
Prime Minister Benjamin Netanyahu is wrong to support a two-state solution, Education Minister Naftali Bennett said Tuesday, a day after the premier reasserted that support in a meeting with US President Barack Obama.“I deeply disagree with him,” Bennett said in an interview with Army Radio. “Unfortunately, most of the parties in Israel support creating a Palestinian state in the heart of the Land of Israel. I think it’s a historic mistake.”According to Bennett, “In 100 years, historians will ask how, during a jihadist period... there are those who talk about injecting all this jihad into Israel.”Still, the Bayit Yehudi chairman expressed optimism that “the idea of a Palestinian state is fading,” and called for “planning for the time after a Palestinian state and thinking about what is in Israel’s interest.”Bennett’s comments come in the wake of a joint press conference with Obama, in which Netanyahu said he still wished to see “two states for two peoples, a demilitarized Palestinian state that recognizes a Jewish state.”The education minister expressed support for Netanyahu’s visit, despite taking issue with a two-state solution, saying that “what happened behind closed doors significantly strengthened strategic ties between the US and Israel.”Bennett posited that the US benefits from the relationship, in that “Israel is the front line of the free world’s battle against radical Islam and jihad... We are fighting daily against the biggest threat to the world.”He also denied reports that the security cabinet voted to approve concessions toward the Palestinians, but said he supports taking steps to improve their economy.Yesh Atid chairman Yair Lapid, meanwhile, said improving bipartisan ties between Israel and the US is “of utmost importance.“We must protect, in every way possible, the historic friendship and strategic alliance of many years that characterizes the relations between the two countries,” he said.“The security aid package and US standing at Israel’s side diplomatically cannot be a political pawn. We must act determinedly to strengthen the connection and leave behind disputes.”