“Eastern Jewry should not be ashamed; Zionism was ingrained in her from the belly and through birth. Now we want our contribution to also be evident in the educational curriculum," says Bitton. 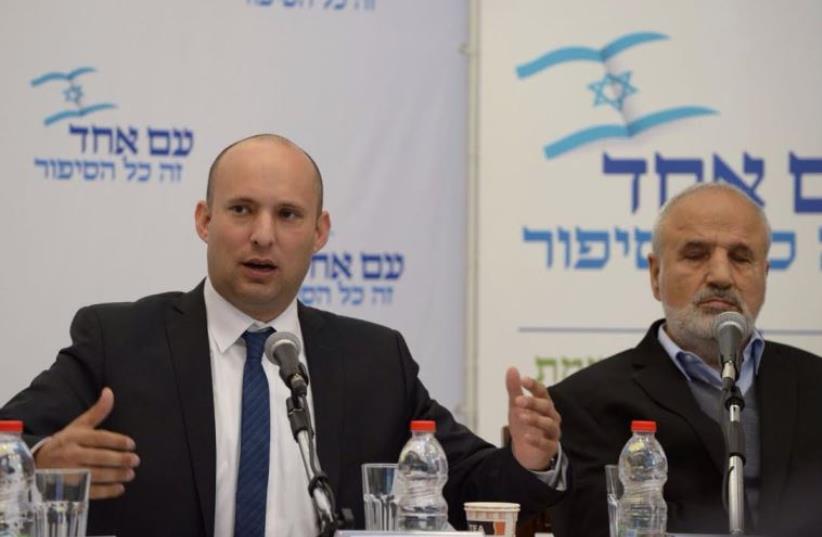 Education Minister Naftali Bennett and Israel Prize laureate Erez Biton.
(photo credit: Courtesy)
Advertisement
Education Minister Naftali Bennett launched the Biton Committee on Wednesday, tasked with empowering Eastern Jewish cultural studies within the general curriculum.“Today we started a revolution of Eastern Jewish heritage in the education system,” announced Bennett. “Today, we are returning to our youth half of the story that has been lost along the way.“We cannot raise a generation that knows only half of its legacy and we cannot educate youth to ‘love thy neighbor as thyself’ when youth do not know their ‘neighbor’ that constitutes at least half of their class,” he said.The education minister called on all Israelis to take an active part in the committee by sending personal stories and suggestions.Last month, Bennett announced that the committee would be headed by Erez Biton, the first poet of Mizrahi background to win the Israel Prize in Literature (2015).Biton will be tasked with empowering the identity of the Mizrahi Jewish community – including immigrants from Egypt, Iraq, Iran, Tunisia and Libya – within the education system.Biton, who has been blind since childhood, was born in Algeria. His well-known works include 1976’s Mincha Marokait (Moroccan Gift), 1979’s Sefer Hanana (Book of Mint) and 1989’s Tzipor Ben Yabashot (Bird Between Continents)...“When the education minister approached me I immediately felt hope and the expectation that accompanies Jews from the East. I myself gave expression to the difficulties of the aliya years in my poetry and in my works,” said Biton.“Eastern Jewry should not be ashamed; Zionism was ingrained in her from the belly and through birth. Now we want our contribution to also be evident in the educational curriculum, that also our contribution to Zionism will be heard and taught,” he said.Additional members of the committee include Dr. Oshra Alfasi, Prof. Aharon Maman, Dr. Yehuda Mimran, Prof. Moshe Amar and Dina Drori. Zehava Shemesh will serve as the committee coordinator and representative of the Education Ministry.The committee convened for the first time at a roundtable discussion in Jerusalem on Wednesday along with Bennett, Michal Cohen, director-general of the Education Ministry, as well as public officials and intellectuals.The structure of the committee includes several subcommittees, which will examine how to integrate and expand the culture of Mizrahi Jewish communities within the education system at all age levels and across a variety of disciplines such as literature and history.The committee is set to make recommendations to the education minister in three months time.