The speaker said during his recent visit, US allies across the Middle East had expressed deep concern with the extreme "Middle East fatigue" of the Obama administration, as well as Trump's rhetoric. 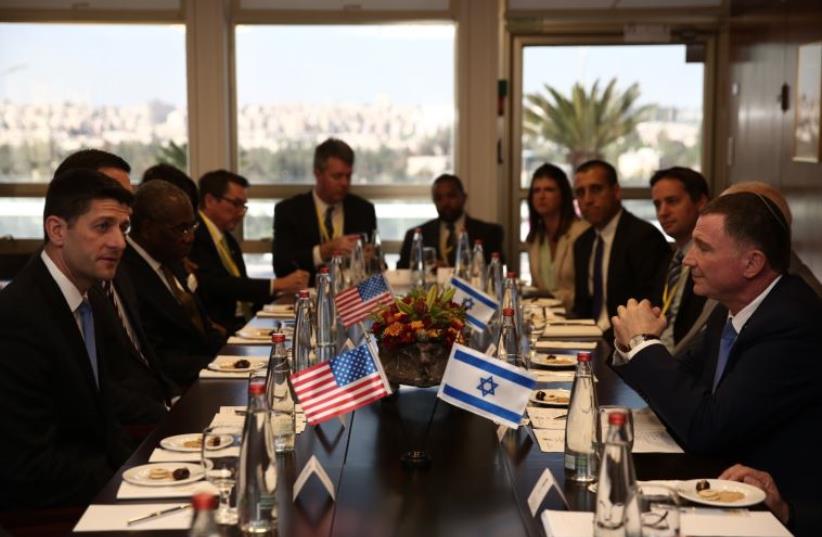 US Speaker of the House Paul Ryan (L) sits across from his Israeli counterpart Yuli Edelstein (R) as he visits the Knesset‏
(photo credit: NOAM RIVKIN-PANTON/KNESSET SPOKESPERSON)
Advertisement
WASHINGTON - Critical negotiations over a new US defense package to Israel are taking place in a challenging budgetary environment for the United States, Speaker of the House Paul Ryan said on Thursday, reflecting on his recent trip to the region.He is one of several across US party lines to note that budget constraints are affecting talks between Washington and Jerusalem over the new defense agreement, formally known as a memorandum of understanding (MOU), set to replace an expiring, decade-old commitment of US aid worth $3 billion a year.Obama administration officials say they are prepared to negotiate with Israel the largest defense package of its kind in history, despite acknowledging fiscal challenges.Over breakfast in the speaker's office, Ryan said it "goes without saying" that expensive social programs are putting pressure on Congress to limit discretionary spending."We have budget constraints like anybody else does," Ryan said, asked by The Jerusalem Post whether the negotiations would be affected by US budget constraints."Our budget is constrained because we're not dealing with the autopilot nature of our budget," Ryan said. "We're not dealing with mandatory spending. And because we're not dealing with mandatory spending, we have shrinking fiscal space for discretionary spending. And this stuff is discretionary spending." "There's not going to be enough money left for discretionary spending if we don't fix this entitlement problem," the speaker continued.Israel is requesting roughly $5 billion per year in the new package, while the US is pitching between $3.4 and $4 billion. "In Israel's view, the lower end of that range would actually represent a decrease in aid, since the 2007 MOU would have amounted to $3.6 billion per year if one factors in inflation," notes David Makovsky, a former senior advisor on Secretary of State John Kerry's Middle East peace team.Last month, on a visit to Israel, Senator Lindsey Graham (R-South Carolina) told the Post the US would be as generous as possible given the circumstances.Ryan outlined his foreign policy as that of a realist seeking peace through strength— a position which requires robust economic growth at home in order for these foreign aid programs to remain viable, he said."We give $1.3 billion to Egypt. I don't think we should take that away. I think right now they need that assistance," he added.Ryan recently visited Israel on his first trip abroad as speaker of the House. The trip was enlightening, he said, as US allies across the region expressed deep concern with the extreme "retrenchment" and "Middle East fatigue" of the Obama administration, as well as alarm over the rhetoric of Donald J. Trump, frontrunner for the Republican presidential  nomination.Trump's plan to ban foreign Muslims from the US "got under my skin," Ryan said. He was thanked abroad for rebuking the policy proposal as un-American.Neither a hawk nor a dove, Ryan rejected the notion that you can "fortress America," or that the loose application of American military power can solve the problems of the Middle East. He seemed enthused at the prospect of a Saudi-led Muslim coalition of forces that would take the fight to Islamic State militants on the ground in Syria.The speaker said that a new MOU with Israel is "very important" for regional security, for the maintenance of Israel's qualitative military edge, and for the national security of the United States."I don't know what the numbers are going to be - that's between the administration and the Israeli government - but that's pretty darn important," Ryan added.