Fine to Pasta Basta seen as effort to intimidate businesses.

Pasta Basta restaurant in Jerusalem
(photo credit: AMY SPIRO)
Advertisement
In an effort to quell the clamor for independent kashrut supervision, the Chief Rabbinate has fined the popular Pasta Basta Jerusalem restaurant for using the Orthodox Hashgacha Pratit kashrut authority instead of its own services.The fine was issued against the pasta restaurant located in the capital’s Mahaneh Yehuda market on Tuesday, one day after Hashgacha Pratit issued new certificates for the restaurants under its supervision following a High Court of Justice ruling earlier this month that loosened restrictions on non-rabbinate kashrut supervision.The fines appear to be an attempt to intimidate other restaurants and businesses from abandoning the rabbinate’s kashrut in favor or independent alternatives, since it is unlikely that they will stand up in court when they are inevitably challenged in light of the recent High Court ruling.And the Chief Rabbinate even took the highly unusual step of issuing a press release on Tuesday night informing the media about the fine against Pasta Basta in order to get out the message that it will not easily abandon its control of the supervision market.The High Court’s decision stated that although the Chief Rabbinate is still the only legally authorized body that can declare a product or business to be kosher in writing, restaurants can provide in writing a “true presentation” of the kashrut standards they keep, as long as they state they do not have a kashrut license. 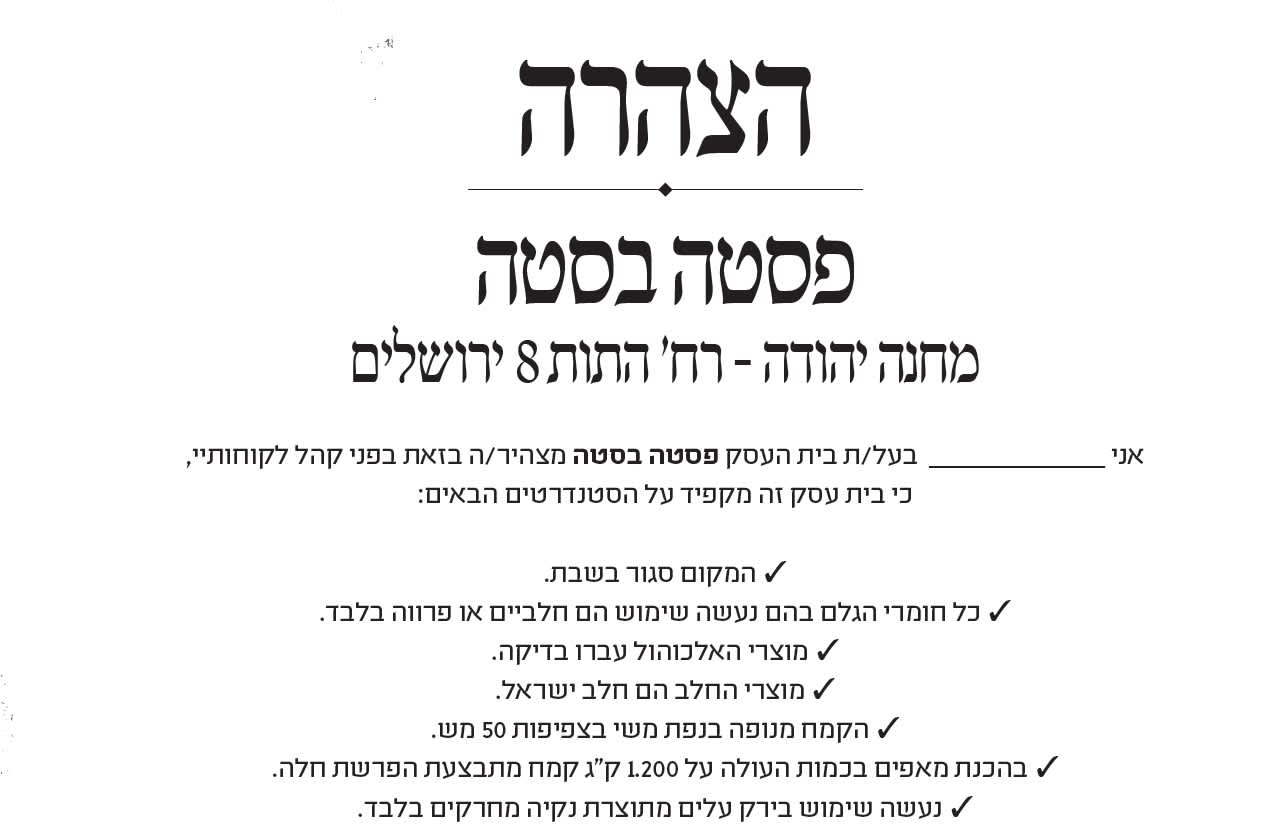 Pasta Basta's new kashrut certificate from Hashgacha Pratit, detailing the kashrut standards they maintain as permitted under a ruling of the High Court of Justice this month
Hashgacha Pratit’s new certificates now specify the exact kashrut practices which restaurants and businesses under its supervision observe, so certificates for dairy restaurants such as Pasta Basta now state that all products are dairy or pareve (without meat or milk); that the milk products are from supervised kosher milk; that flour is sifted for insects according to kashrut standards; and that leafy vegetables are correctly washed to remove insects, among other specifications.Hashgacha Pratit sought legal counsel when wording its certificates so as to conform to the High Court ruling, and issued new certificates to the 40 restaurants and businesses under its supervision on Monday.Despite this, the Chief Rabbinate’s Department for National Kashrut issued Pasta Basta, which was displaying its new certificate, with a NIS 2,000 fine for contravening the Law Against Kashrut Fraud.Hashgacha Pratit said in response that the fine demonstrated how afraid the Chief Rabbinate was of losing its monopoly.“Initially they ignored us, then they belittled us, and now they’re fighting us, and shortly we will win,” the group said in a statement to the press. “The Chief Rabbinate is hysterical and is beginning to smell the end of their monopoly over kashrut.”Hashgacha Pratit insisted that its new certificates are commensurate with the High Court decision and said it would gladly defend them in front of a judge, although noting that the Chief Rabbinate had never prosecuted any of its restaurants for failing to pay their fines.“The rabbinate knows they have no legal case, the entire point of the fine is to scare others,” Hashgacha Pratit said.The fine against Pasta Basta is not the first step taken by the Chief Rabbinate to ward off competition in the kashrut supervision industry since the High Court ruling.Shortly after the High Court decision, the director-general of the chief rabbinate, Moshe Dagan, sent a letter to the head of Tzohar rabbinical organization head and municipal chief rabbi of Shoham Rabbi David Stav, warning him that he would be fired as chief rabbi of Shoham if Tzohar establishes its own kashrut supervision service, as it has indicated it will do.In addition, the day after the High Court ruling, Chief Rabbi David Lau called on United Torah Judaism and Shas to advance legislation to circumvent the decision and shore up the Chief Rabbinate’s monopoly on kashrut supervision.Pasta Basta owner Haim Avrahami told The Jerusalem Post that he will request a court hearing in order to contest the fine, insisting that the fine was not legal.“They are trying to frighten businesses and send out the message that using an alternative kashrut authority to theirs is dangerous,” Avrahami said.He said, however, that the fine was simply a “media campaign,” noting that the rabbinate had informed the media of it, and that he doubted his case would ever reach court or that he would need to pay the fine.Avrahami said he had swapped his rabbinate kashrut for Hashgacha Pratit both because he is an ideological proponent of the separation of religion and state and due to poor and possibly corrupt practices of rabbinate kashrut officials.One practice he recalled was of the rabbinate supervisors requiring him to obtain leafy vegetables and other produce from specific suppliers, even though such decisions are not relevant to kashrut.Avrahami said it was harder to remove insects from the produce he was told to buy, as required by kashrut law, than of his preferred supplier, but he nevertheless was forced to buy from the supervisor’s preferred supplier.And he said that the large majority of his Orthodox clientele had not only continued to eat at the restaurant but had actively supported his decision to switch to Hashgacha Pratit in light of the frequent reports of bad practices and corruption in the rabbinate’s supervision, as underlined in a scathing State Comptroller’s Report last May.