The e-mails, which the Clinton campaign has not confirmed as authentic, featured an exchange between one of Clinton's top foreign policy advisers. 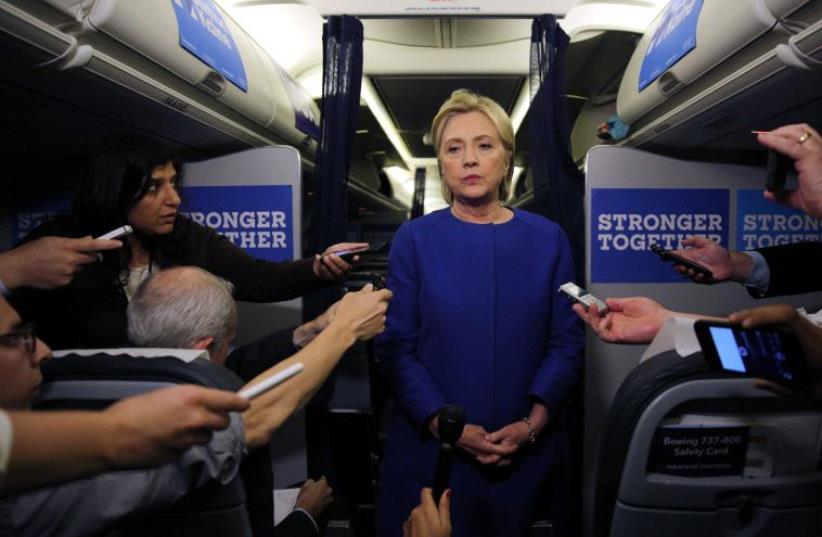 Democratic nominee Hillary Clinton talks to reporters about the explosion in Chelsea neighborhood of Manhattan, New York, as she arrives at the Westchester County airport in White Plains, U.S., September 17, 2016
(photo credit: REUTERS)
Advertisement
WASHINGTON – The very mention of Israel at Hillary Clinton’s initial campaign events for president was controversial among her aides, who feared it might stir unwanted controversy with her party base, according to internal correspondence released by Wikileaks.The emails, which the Clinton campaign has not confirmed as authentic, featured an exchange between one of Clinton’s top foreign policy advisers, Jake Sullivan, and Robby Mook, her campaign manager, over the wisdom of raising her support for Israel at public events. Sullivan suggested she raise her commitment to Israel to show voters that she is “standing up for our allies and our values.”Mook disagreed. “We shouldn’t have Israel at public events. Especially ‘dem’ activists,” he wrote.The campaign manager suggested Clinton save her Israel references for private events with donors – a less fervently liberal support group, and one more interested in foreign policy.“The only voters elevating [foreign policy] at all are Republican primary voters,” said another consultant involved in the deliberations.The discussion, held in May 2015, preceded a turbulent primary campaign that featured a greater challenge than Clinton’s camp expected from her left. Vermont Sen. Bernie Sanders, the democratic socialist who ultimately won 43% of the vote, fought throughout their battle for a new approach to America’s alliance with Israel and for “balance” on the Palestinian issue in the Democratic Party platform.The platform ultimately reflected Clinton’s position, reinforcing US support for a secure, democratic Jewish state of Israel alongside a sovereign Palestinian state living in peace and with dignity.On Monday, Wikileaks said founder Julian Assange’s Internet was shut down by the government of Ecuador, deflecting blame from the US or British governments, which have sparred with Assange for releasing sensitive material.“We can confirm Ecuador cut off Assange’s Internet access Saturday, 5 pm GMT, shortly after publication of [Hillary] Clinton’s Goldman Sachs speeches,” the statement from WikiLeaks said.Assange has lived and worked in Ecuador’s London embassy since June 2012, having been granted asylum there after a British court ordered him extradited to Sweden to face questioning in a sexual molestation case involving two female WikiLeaks supporters.WikiLeaks said Assange lost Internet connectivity on Sunday night.Reuters contributed to this report.