As part of his human rights activism, Keyes has used political comedy and satire to highlight human rights violations. 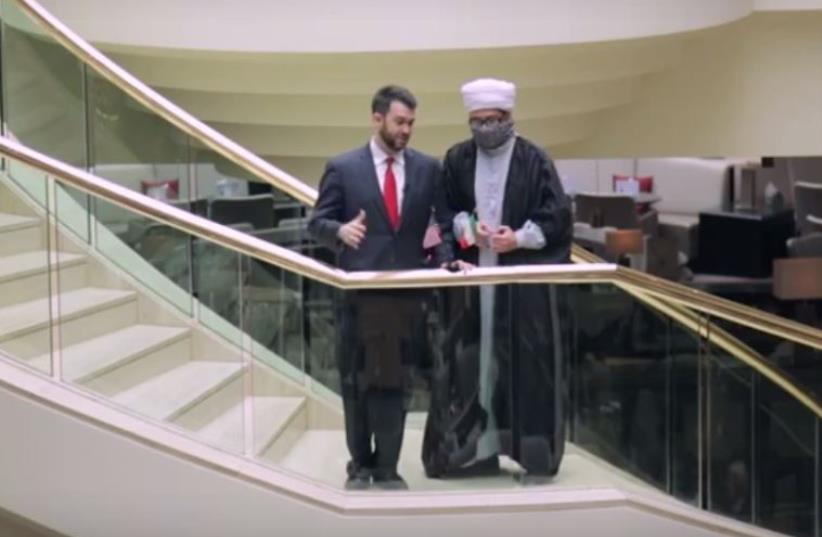 David Keyes punks Iran's nuclear negotiators in Vienna.
(photo credit: screenshot)
Advertisement
Prime Minister Benjamin Netanyahu’s new English-language spokesman David Keyes, who spent the last several years as a human rights activist, will be well placed to rebuff critics who use “human rights” as a lance to bash Israel, Jewish Agency Chairman Natan Sharansky said Saturday.Sharansky, who has been cited as one of Keyes’ mentors, told The Jerusalem Post that at a time when human rights issues are increasingly a focal point on the international agenda but, “unfortunately being used by our enemies as a weapon to delegitimize and attack Israel,” Keyes “is the one to speak with full confidence about the importance of this issue and how hypocritical it is when it is being used against Israel.”The Post first reported on the Keyes appointment last week, and a formal announcement is expected “soon.”Keyes grew up in Los Angeles and moved to Israel in 2006, following his family which made aliya two years earlier. He has a BA in Middle East Studies from UCLA, and an MA in diplomacy from Tel Aviv University.He served in the IDF’s Strategic Division from 2007-2008 as a liaison to the Jordanian military.In addition to English, he is fluent in Hebrew and Arabic.Keyes worked with Sharansky from 2008–2009 at the Shalem Institute in Jerusalem and also has worked in the past with Foreign Ministry Director-General Dore Gold at the Jerusalem Center for Public Affairs, and with former National Security Council head Yaakov Amidror.Sharansky introduced Keyes to Robert Bernstein, the US human rights activist who founded Human Rights Watch, but later turned sour on the organization because of what he deemed to be its decidedly anti-Israel slant.Sharansky first met Bernstein in Moscow in 1976 when Sharansky was a leading Soviet Jewish dissident.Bernstein set up Advancing Human Rights, the organization Keyes heads as its executive- director. The organization also runs Movements.org, an Internet platform that connects human rights activists in closed societies with people around the globe.As part of his human rights activism, Keyes has used political comedy and satire to highlight human rights violations.For example, last year – outside of New York University where Iranian Foreign Minister Javad Zarif was giving a speech – he held a “party” and handed out free ice cream to “celebrate” Iran’s hanging of its 1,000th political prisoner in 18 months.A clip of that event was seen by some 50,000 people on Youtube.In the summer, he went to Vienna where the Iran nuclear negotiations were being held and accosted Iranian diplomats with questions such as, “Who is your favorite political prisoner?” That video of him “punking” the negotiations was seen by some 350,000 people.While this type of guerilla theater is sure to attract criticism when he is formally appointed, Sharansky said Keyes was successful in attracting attention to things that Israel wanted on the world’s radar screen: Iran’s human rights abuses.“He succeeded more than anyone else,” Sharansky said. “His ice cream party in New York drew a great deal of attention to the type of regime Iran really is, and the fact that those who didn’t want to hear that criticism were irritated, so what?” As a human rights activist, Keyes also often has been critical of human rights abuses in China, Egypt, Saudi Arabia and Russia. Sharnsky dismissed concern that this could somehow harm Israel’s ties with those countries, saying the same was wrongly said about him when he was made a minister and had dealings with the Kremlin.The fact that Keyes “spoke truth to power” is something that is to his benefit, according to Sharansky. “The fact that we want to be friends with China and Egypt does not mean we recognize them as examples of democracy,” he said.