Trump officials: Two-state solution not the only path to peace

Trump administration officials suggested that peace between the parties might be possible in another framework. 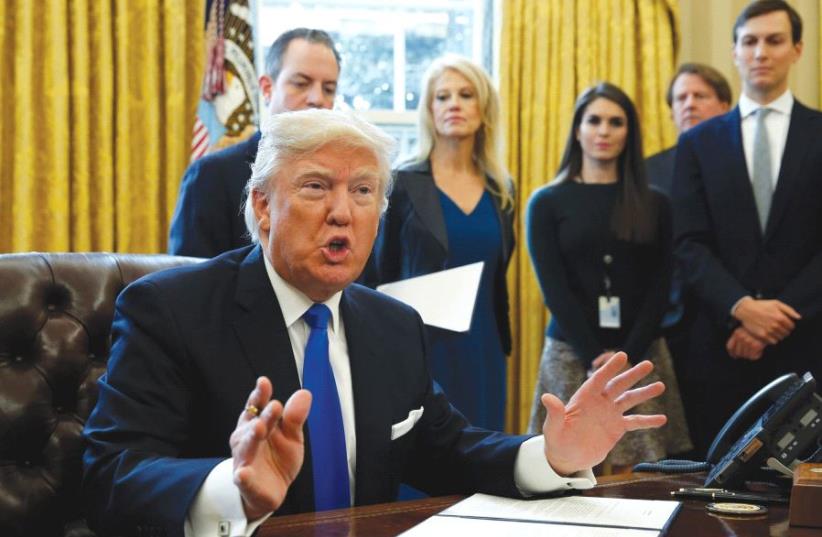 US PRESIDENT Donald Trump speaks to reporters while signing executive orders at the White House on Tuesday.
(photo credit: KEVIN LAMARQUE/REUTERS)
Advertisement
WASHINGTON -- Rebooting direct negotiations between Israelis and Palestinians is a top priority of US President Donald Trump, senior officials in his administration said on Tuesday, previewing his first official meeting with Prime Minister Benjamin Netanyahu tomorrow.
Netanyahu prepares to fly to Washington DC, US (credit: GPO)
The president and First Lady Melania Trump will greet Netanyahu and his wife, Sara, at the White House in the morning, and the two leaders will hold a brief press conference before holding two hours of meetings.Speaking to White House reporters, Trump officials declined to specify the administration's objectives for direct talks beyond the broad goal of peace. "A two-state solution that doesn't bring peace is not a goal that anybody wants to achieve," the official said. "Peace is the goal, whether it comes in the form of a two-state solution if that's what the parties want or something else, if that's what the parties want, we're going to help them.""We're not going to dictate what the terms of peace will be," the official added.In recent decades, subsequent administrations have explicitly outlined their hopes for a two-state solution to the Israeli-Palestinian conflict, resulting in two states for two peoples living side by side in peace and security. Past negotiations have operated on the assumption that such an outcome would roughly fall along the lines that resulted from the Six Day War in 1967, with mutually agreed land swaps reflecting a change in demographics.But Trump administration officials suggested that peace between the parties might be possible in another framework."If I ask five people what a two-state solution is, I get eight different answers," one said.The administration seeks a seamless public viewing tomorrow that suggests "no daylight" between the two governments, after eight years of tension between Netanyahu and former US President Barack Obama.Trump officials expect settlements will be a topic of conversation during the meeting. Iran's regional activities and its nuclear program will also top the agenda.