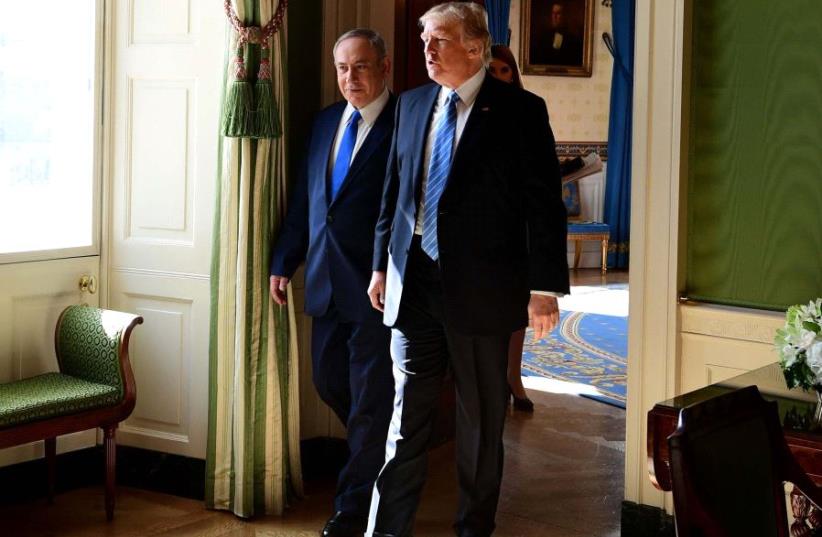 PM Netanyahu and President Trump
(photo credit: AVI OHAYON - GPO)
Advertisement
US President Donald Trump’s approach to the Israeli-Palestinian dispute is a welcome breath of fresh air, according to Dr. Einat Wilf, a former Labor MK who addressed the issue at a Jewish Agency- hosted panel in Tel Aviv on Sunday.At a session about Israel-US relations in the Trump era, Wilf opined that the “supposedly careless” element of the president’s attitude toward a one- or two-state solution is “not only refreshing, but it is what we really need.“If people are truly willing to leave us alone to find what we can agree on, it will be one of the greatest contributions to making peace,” she asserted, stating that external players don’t truly understand the roots of the conflict.
Trump on the two state solution for Israel and Palestinians during meet with Trump , Feb. 15, 2017 (credit: REUTERS)
“If Trump might lead a noninterventionist approach, I think it would make a tremendous contribution to the ability of both sides to agree,” she said.The panel took place on the first day of the Jewish Agency Board of Governors winter meetings, held at the Hilton Hotel in Tel Aviv.Wilf sat alongside Michael Herzog, a retired IDF brigadier-general and former senior defense official; Richard V. Sandler, chairman of the Jewish Federations of North America’s board of trustees; and former Foreign Ministry director-general Dore Gold. The panel was moderated by journalist Tal Schneider.Herzog said he “doesn’t buy” the one-state solution.“To me, a one-state solution is a contradiction in terms,” he said.“It’s a recipe for a never-ending war.... It’s Belfast, Kosovo, Serbia all over again, and the end of the Zionist idea.”Gold said that discussions about states “leave out the critical issue of borders,” adding that in any arrangement, Israel must never leave the Jordan valley, retaining it as its front line of defense.“Israel must maintain some settlement blocs,” he added.The regional approach referred to during Trump’s press conference with Prime Minister Benjamin Netanyahu earlier this month was another aspect the panelists focused on.Noting the development of relations between Israel and Arab countries over the past few years, Herzog said that “rather than going back to the old paradigm of bilateral negotiations, which lead nowhere, let’s make use of relations with the Arabs and open more space” to enable engagement between Israelis and Palestinians.Following the discussion from the front row, Jewish Agency Chairman Natan Sharansky noted that the Israeli panelists all seemed optimistic about the future, in contrast with the American Jews he converses with.To this, Sandler responded that just as American Jewry doesn’t understand the daily realities of Israelis, the same is true vice versa.“We have to make it a better bridge,” he said. “US Jewry wants to see peace in the Middle East – we all agree on that. But how to get there is the problem.”He added that there was optimism among those who have knowledge about the new administration and its relationship with Israel, and pointed to US Ambassador to the UN Nikki Haley’s scathing criticism of the Security Council’s anti-Israel bias.“There is no question that relationships mean a lot to Trump and he clearly has good chemistry with Netanyahu, and I wouldn’t underestimate that,” Sandler said.