Druse and Circassian Local Councils Forum head Jaber Hamoud to ‘Post’: Kahlon and Netanyahu called me in the evening asking what we need to do to cancel the protest. 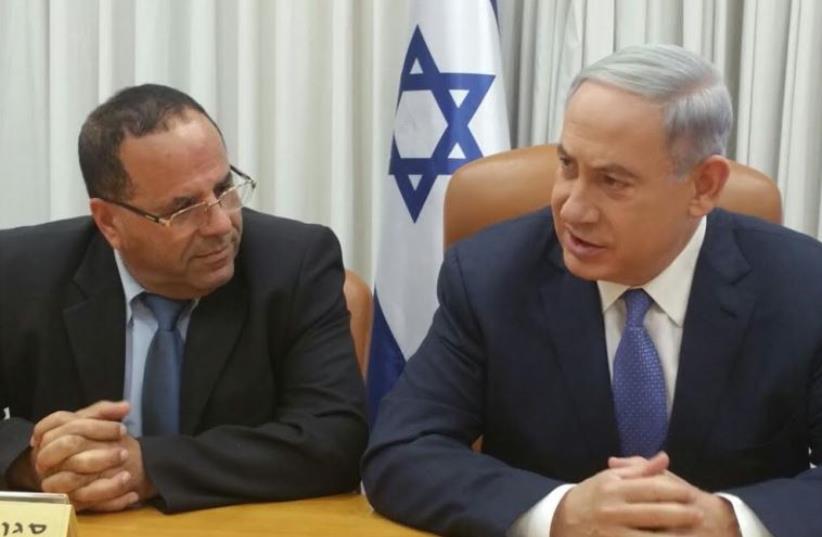 Benjamin Netnayahu and Ayoub Kara.
(photo credit: Courtesy)
Advertisement
Druse and Circassian mayors canceled a second planned protest in Jerusalem on Sunday after the government decided to approve a NIS 2 billion five-year development plan for these communities.The plan aims to develop communities and improve various aspects of life such as education, employment, tourism, youth programs, and infrastructure.The cabinet decision also includes raising the subsidy for developing plots of land for discharged soldiers to 75-90 percent, according to a statement issued by the Prime Minister’s Office.The Druse and Circassian population is estimated to be 140,000. Communities included in the plan are Abu Sinan, Beit Jann, Julis, Daliat al-Carmel, Hurfeish, Yanuh-Jat, Yarkha, Kisra-Samia, Kafr Kama, Majar, Sajur, Ein el-Asad, Usfiya, Peki’in, Rama and Reina.“You represent an entire public that fights and sacrifices for the State of Israel,” said Prime Minister Benjamin Netanyahu.“In my visits to the villages, in the meeting we had there last year with community leaders, I was struck by the gap that had been created and which we need to close,” he said adding that he was committed to the Druse community and integrating it into Israeli society.Finance Minister Moshe Kahlon, who last week was blamed by the Druse for postponing the plan, said he spoke to the leaders of the two communities and told them these would not be “empty promises,” that the government “fully intends to pay the costs of the plan and implement it.”Last Sunday, Druse and Circassian mayors, as well as Druse Deputy Regional Cooperation Minister Ayoub Kara, protested outside the Finance Ministry and Prime Minister’s Office because of a decision by Kahlon to postpone a vote on the plan.Druse community leaders were livid and Druse and Circassian Local Councils Forum head Jaber Hamoud told The Jerusalem Post at the time, “If the government does not support the Druse and give us the minimum amount [of funds], we call on Ayoub Kara to resign immediately.”Hamoud was in better spirits on Sunday, telling the Post he canceled the second planned protest at 11 Saturday night after repeated calls from the prime minister and finance minister to work out details of an agreement.“Kahlon and Netanyahu called me in the evening asking what we need to do to cancel the protest,” he said, adding that at around one in the morning, Netanyahu called and invited him and the other mayors and municipality heads to the Prime Minister’s Office for the cabinet meeting.There, on Sunday, Hamoud thanked Netanyahu on behalf of the Druse and Circassian communities, and Kara, the government official responsible for the development of the two communities, thanked God “for the privilege to be a part of the Israeli government” which made the decision