Kahlon absent from reunion to mark 10 years since Gaza withdrawal. 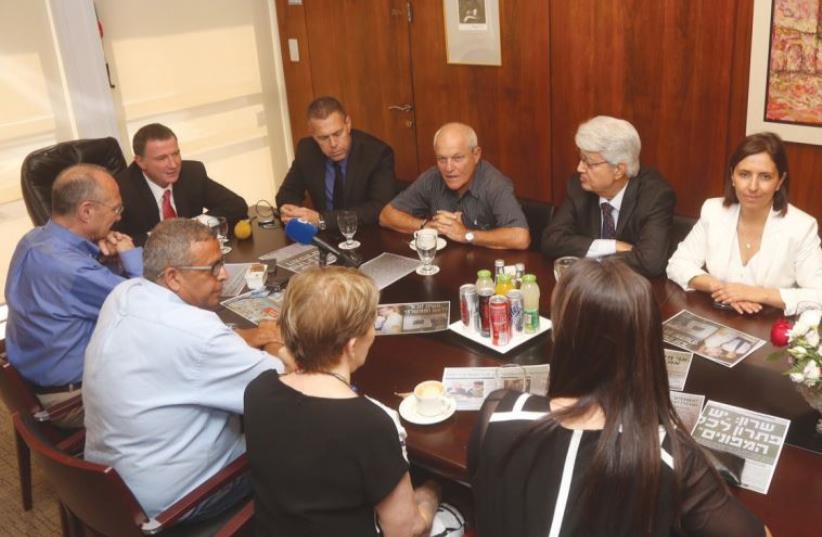 Likud rebels – who fought to prevent the Gaza disengagement – meet with Knesset Speaker Yuli Edelstein in the Knesset
(photo credit: MARC ISRAEL SELLEM/THE JERUSALEM POST)
Advertisement
Knesset Speaker Yuli Edelstein gathered his fellow former Likud rebels who had fought to prevent the Gaza Strip withdrawal a decade ago, to deliver a message on Tuesday: “We are not here to say we told you so, but we told you so.”Since the withdrawal, Edelstein has risen to become the parliamentary speaker, and MKs Gilad Erdan, Gila Gamliel and Haim Katz have become ministers. Finance Minister Moshe Kahlon, who was also part of the rebel group but whose views have since changed, was conspicuously absent from the reunion in Edelstein’s office.“The prime minister [Ariel Sharon] told us the world would give us 10 years of support, and we told him barely 10 days,” the Knesset speaker said. “They told us how the IDF wouldn’t need budgets anymore. They told us there was a solution for every settler, and on that I don’t know if I should laugh or cry. They told us we were delusional. We need to learn lessons from that experience.”Former foreign minister David Levy, the elder statesman among those gathered, compared the group to the Maccabees.“We were the few against the many, believers in our path, swimming against the stream,” Levy said. “It wasn’t simple. It meant sacrificing. We were considered extreme, as those who were pushing away the peace and hope that the nation wanted. We weren’t geniuses, just realistic.”Erdan admitted that the group had been a failure, but he said Sharon had not played fair in ignoring the Likud membership’s vote against the withdrawal.He noted that even opposition leader Isaac Herzog currently considers the withdrawal a security mistake.“We failed to stop the mistake of Arik Sharon,” he said. “It was hard to come out against him. The biggest lesson for the public is that politicians can behave unethically and anti-democratically. The lesson for politicians is that they should keep their promises to the public.”Former minister Uzi Landau, who quit at the time to protest the decision, said the disengagement had made Tel Aviv and Rishon Lezion into part of the Gaza periphery. He said parts of the Hebrew press could not be forgiven for having encouraged the withdrawal.Speaking a day after settlers were evacuated in Beit El, former MK Nomi Blumenthal expressed hope that there would never be another disengagement.