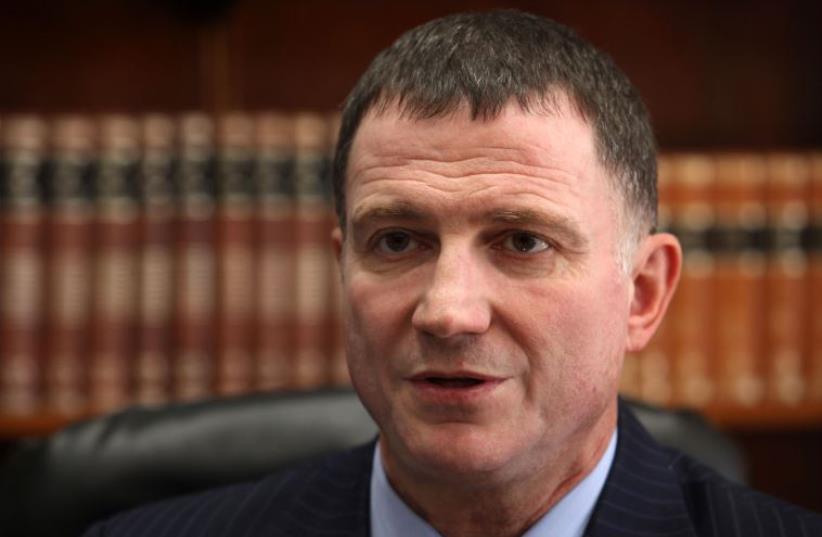 Knesset Speaker Yuli Edelstein
(photo credit: MARC ISRAEL SELLEM/THE JERUSALEM POST)
Advertisement
The Economics Arrangements Bill must be shortened significantly, Knesset Speaker Yuli Edelstein and Knesset Legal Adviser Eyal Yinon said Monday.The bill, which has yet to be officially submitted, is passed at the same time as the budget each year and outlines the basic economic policies that are meant to accompany the budget. It is usually very long, and often features articles that have little to do with the budget.Yinon wrote a letter to Edelstein stating that from reviewing government decisions and memos from the finance minister, it is clear that the EAB is going to be long and feature many dozens of articles on many areas, many of which are not directly connected to the budget, including significant reforms.“The length of the apparent bill completely defies the policies you and your predecessors as Knesset Speaker outlined and the principles sent many times in the past to government representatives about including [unrelated] topics in the EAB,” Yinon wrote. “These principles were meant on the one hand to allow the government to pass bills supporting the budget and growth in a short time, while on the other hand allowing the Knesset and its members to properly fulfill their job.”In light of the schedule for passing the budget – first reading on September 2, second and third (final) on November 19 – and the upcoming holidays, the Knesset committees will have a maximum of 35 work days to discuss and other - wise work on the different topics in the budget and EAB, Yinon pointed out.“Under these circumstances, I want to warn that the EAB in its apparent length and format will severely and significantly harm the integrity of the legislative process,” he added.Edelstein agreed, after receiving the letter, that the EAB cannot pass in its current format, or else it will harm the Knesset’s work.“As Knesset speaker, I must make sure that things that are not directly related to the budget are removed from it,” Edelstein stated. “Therefore, there is no reason not to cut down the bill, split some of the articles and not pass them all in the Finance Committee.”In 2013, Edelstein made sure, with then-finance minister Yair Lapid’s cooperation, that the EAB was split into several bills, so that some of the more complex issues it addressed could be discussed separately in Knesset committees. He sought to do the same in 2014, but the budget did not end up passing in the Knesset, which was dispersed.The Finance Ministry responded to Yinon’s letter saying the economic reforms in the EAB were meant to increase competition in the market and reduce the cost of living, and were developed following in-depth discussions.Some examples of such reforms, which the ministry listed, are the “cornflakes reform,” meant to lower regulation of dry food imports and thus lower their price; health insurance reform; and increasing competition in banking, which is meant to lower credit costs.“The Israeli market needs structural reforms and changes for the good of our citizens,” it said.Zionist Union’s spokesman said the EAB turned into a “legislative steamroller” and “should disappear from the Israeli democratic world, certainly in its current scope.”“It’s clear that [Prime Minister Benjamin] Netanyahu wants MKs to be his rubber stamp and fingers to rent for all his whims, but Israel is still a democracy and the public has a right to have lawmakers protect their its rights,” the spokesman added, calling on Finance Minister Moshe Kahlon to break up the EAB into several bills.Meretz chairwoman Zehava Gal-On called on Edel - stein to refuse to discuss the EAB unless every economic reform is removed and made into a separate bill.“The size of the EAB is the biggest in many years. The decision to include all of these steps in the EAB is blatant and intolerable disrespect for the Knesset by Finance Ministry bureaucrats who were not voted in by the public,” she stated