In response to the Histradrut's strike warnings, Transportation Minister Israel Katz slammed Egged for the company's behavior, calling upon the management to stop holding its workers hostage. 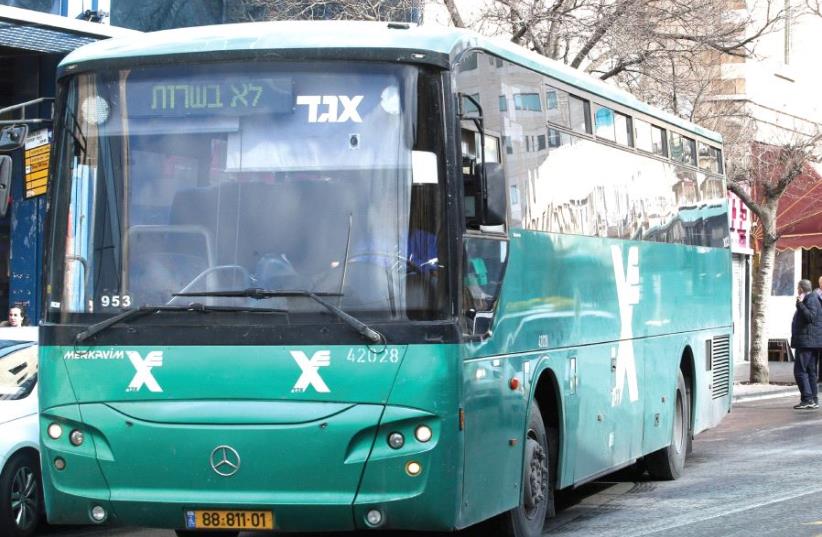 Egged bus
(photo credit: MARC ISRAEL SELLEM)
Advertisement
Egged drivers will be launching a nationwide strike beginning 5 a.m. Tuesday morning, if the company's management and government officials do not reach a last minute solution to ongoing disputes before that time. The potential strike is the result of clashes between Egged's management and the Finance and Transport ministries over a new government subsidy agreement for the company. Drivers are demanding that veteran Egged workers earn more than NIS 39 per hour, the minimum wage in the sector earned by beginning drivers, Globes reported. "Everyone knows what is at stake," said Histadrut labor federation chairman Avi Nissenkorn. "This is not only about the fate of thousands of drivers, but it is also about the public interest that must not be neglected. I hope that the Transport and Finance ministers buckle down and do what is necessary to find a solution and avoid an unprecedented crisis."Since first warning about the potential strike a month ago, Nissenkorn has blamed the ministries for their “foot-dragging” over the subsidy agreement. The failure to move forward with negotiations has prevented the signing of a collective agreement in the company, bringing significant damages to the salaries of drivers, according to the Histadrut.In response to the Histradrut's strike warnings, Transportation Minister Israel Katz slammed Egged for the company's behavior on Monday, calling upon the management to stop holding its workers hostage. During a meeting the previous day, Katz said he demanded that company executives immediately sit down with their employees to discuss working conditions a new wage agreement awaiting government approval. "You are like a dinosaur that refuses to adapt itself to a changing reality," Katz told them. "If you do not do what it takes and make an appropriate decision now, you will disappear. Although I appreciate the capabilities of the company and its history, I will not give up, and if I need to administer a public fight, as I did with the ports and elsewhere, I will not allow any political entity to intervene." With the strike looming on Monday night, the Transportation Ministry said it would be making hundreds of alternative public bus lines available to replace the routes that Egged normally operates. Among the routes of these buses will service are the Shappirim Parking Lot to Jerusalem, Mevasseret Zion to Jerusalem, Acre to Karmiel, Holon to Tel Aviv, Yavne to Rehovot, Kiryat Shmona to Safed and Haifa to Karmiel.In addition, the ministry will be running free shuttles to hospitals and railway stations where Egged normally operates. Israel Railways will also be providing supplementary train service, the ministry said.