On Wednesday, Guinea and Israel announced the reestablishment of ties. Netanyahu said that another African country would soon follow suit. 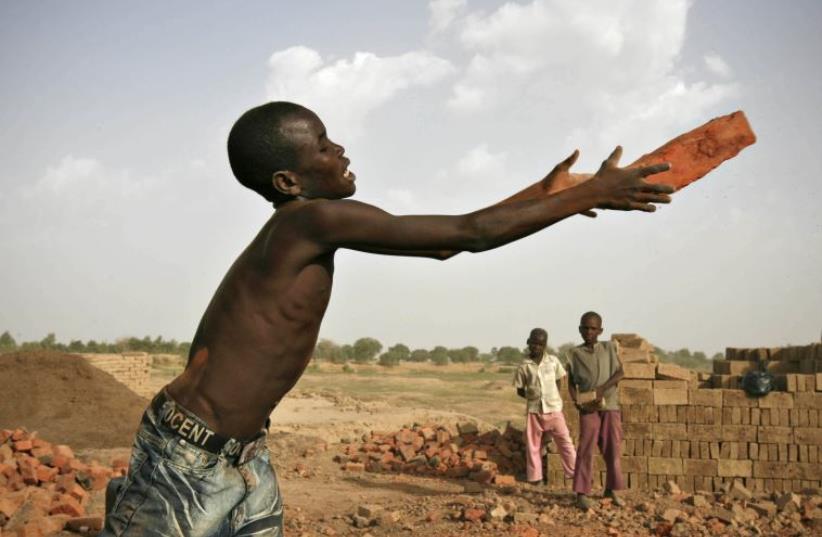 A boy catches a brick at a riverside factory in Chad's capital N'Djamena
(photo credit: REUTERS)
Advertisement
Foreign Ministry director- general Dore Gold visited Chad last week as part of Israel’s push to establish ties with that majority Muslim African state, which is on the front line of the battle against Islamist extremists.“Chad is a central state on the African continent. It is a Muslim nation that speaks Arabic and which is struggling against radical Islamist terrorism,” a Foreign Ministry statement said on Friday.It noted that Chad’s president is the chairman of the African Union, which Israel wants to grant it “observer status.” While in Chad Gold met with President Idriss Deby Itno at his palace in the Sahara Desert.The meeting comes on the heels of Prime Minister Benjamin Netanyahu’s visit earlier this month to Uganda, Rwanda, Ethiopia and Kenya.Netanyahu believes it is very important to improve Israel’s ties with Africa, the Foreign Ministry said.On Wednesday, Guinea and Israel announced the reestablishment of ties. Netanyahu said that another African country would soon follow suit.The Jerusalem Post reported earlier this month that delegations from Chad and Mali, both in sub-Saharan Africa, were in Israel recently. Like Guinea, Chad is also a member of the 57-member Organization of Islamic Cooperation.Chad severed ties with Israel in 1972 after coming under intense pressure from its Arab neighbors, Libya and Sudan.But it recognized Palestine as a state already in 1988.While African countries seem to be warming up to Israel, Palestinian Authority Foreign Minister Riyad al-Maliki announced this week that the PA and Sudan were coordinating to “restrain Israeli movements” in Africa.Abbas had been in Paris on Thursday, where he met with French President François Hollande to talk about the stalled peace process.Abbas had also been scheduled to meet with US Secretary of State John Kerry in Paris on Friday, but that meeting was postponed due to his brother’s death.Reuters, Herb Keinon and Adam Rasgon contributed to this report.