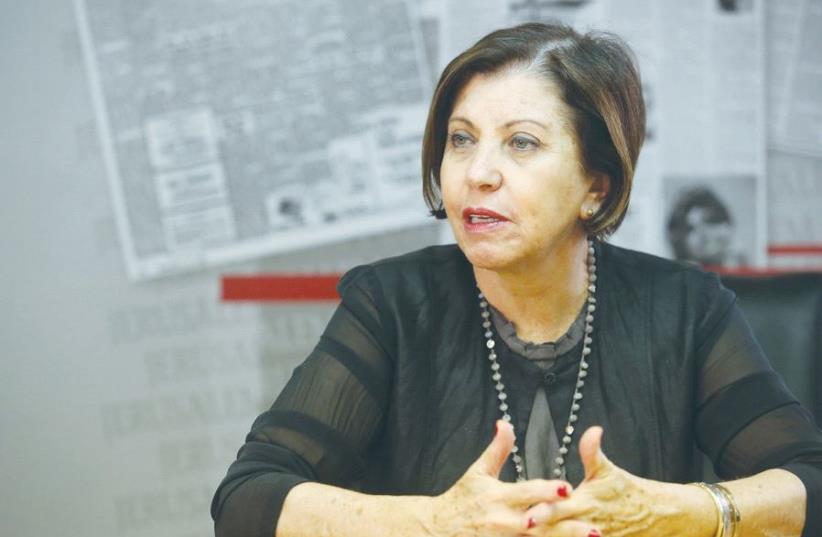 MERETZ HEAD Zehava Gal-On addresses staff at ‘Post’ headquarters in the capital.
(photo credit: MARC ISRAEL SELLEM)
Advertisement
Meretz leader Zehava Gal-On presented a plan for open primaries for electing the party’s Knesset candidates in a letter she sent Wednesday to the members of Meretz’s 1,000-member governing council.Gal-On’s initiative comes after a failed attempt to institute open primaries for party leader two months ago.In a bid to persuade the party’s law committee, which is set to discuss the initiative on Thursday, she recommended a series of measures to ensure that only true Meretz supporters will vote in the primary.According to the proposal, those who vote will have to pay a fee. In addition, candidates for Knesset and party chairman must be endorsed by 30 members of the council.Ilan Gilon and other Meretz MKs are expected to recommend maintaining the current system whereby the council elects Meretz MKs. The council will make a final decision on July 2.“This is Meretz’s opportunity to be much more open to the public, and I think that is worth the risk involved,” Gal-On said. “I don’t want to lose my job, but a dramatic step is needed for Meretz. Without opening our ranks, we will have no chance.”Gal-On also supports Zionist Union MK Tzipi Livni’s proposal for an open primary to determine the candidate for prime minister of the Center-Left in the next general election. She said the leaders of Yesh Atid, Zionist Union, Meretz and Kulanu could compete, but not former defense minister Moshe Ya’alon.