Steinmeier joins a growing list of Western statesmen who have visited the Gaza Strip since last summer’s Operation Protective Edge. 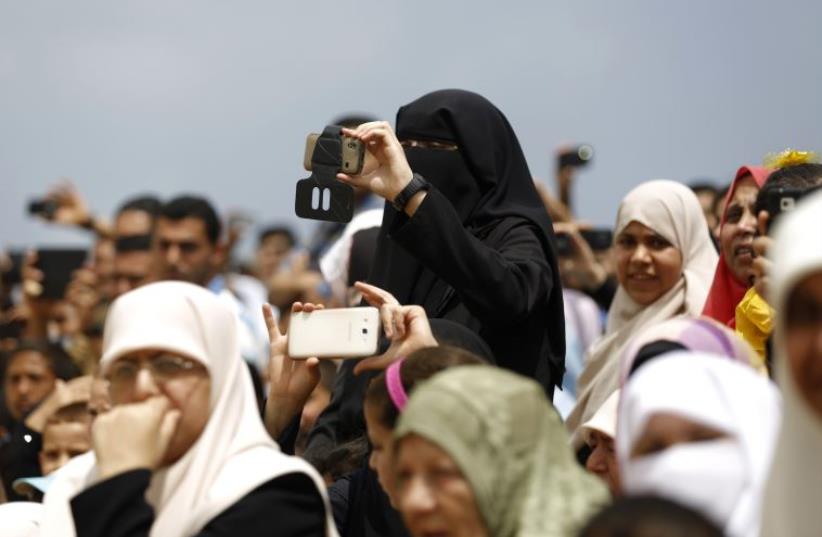 A Palestinian woman takes pictures as Palestinian Hamas security forces perform during their military training graduation ceremony in Gaza City
(photo credit: MOHAMMED ABED / AFP)
Advertisement
A day after stressing the importance of reconstructing the Gaza Strip and saying that Israel’s security is tied to the prosperity of Gaza, German Foreign Minister Frank-Walter Steinmeier is expected to visit there briefly on Monday.Steinmeier joins a growing list of Western statesmen who have visited the Gaza Strip since last summer’s Operation Protective Edge, including the foreign ministers of Norway, Ireland, and Spain, EU foreign policy chief Federica Mogherini, and outgoing Quartet envoy Tony Blair.Like those other leaders, Steinmeier will not meet with Hamas officials. The EU’s policy is that it will not engage with Hamas until the organization recognizes Israel, forswears terrorism, and accepts previous Israeli-Palestinian agreements. Israel has not opposed foreign statesmen’s visits to Gaza, as long as no meetings with Hamas officials are held.“We have to look for options which will enable renewing negotiations with the Palestinians,” Steinmeier said at a photo opportunity at the Prime Minister’s Office in the capital with Prime Minister Benjamin Netanyahu following their meeting Sunday. “The situation in Gaza is very, very difficult, and we have to think about the reconstruction of Gaza and the economic situation, because only through the rehabilitation of Gaza and the economy of its residents, can we think about the security of Israel, which is tied to the prosperity in Gaza.”At a separate meeting with President Reuven Rivlin at his residence, Steinmeier returned to the Gaza theme and said “the troubled situation in Gaza demands of us to think about concrete steps to improve daily life there – without which, I am afraid, the situation is escalating.”Netanyahu, who said he and Steinmeier spoke “at some length” about the diplomatic process with the Palestinians, stated that the only way to move the diplomatic process forward is through direct negotiations.Germany has not yet made any public comments regarding a resolution that France and New Zealand are expected to bring to the UN Security Council setting the parameters of a two-state solution, and a timetable to carry it out. Israel is opposed to such a move, and Netanyahu is making his opposition clear in private meetings.New Zealand Foreign Minister Murray McCully is scheduled to visit later this week, followed by the French Foreign Minister Laurent Fabius later in the month.While the Palestinians have “moved away from these negotiations,” Netanyahu said alongside Steinmeier that he remains “committed to the idea that the only way we can achieve a lasting peace is through the concept of two states for two peoples – a demilitarized Palestinian state that recognizes the Jewish nation state of Israel.”Asked by a reporter about his pre-election comment that a Palestinian state would not emerge during his tenure, he clarified that what he said was that the conditions that would enable two states for two people don’t presently seem to exist.“But of course if those conditions change – and an important part of those conditions is a willingness of the Palestinians to stop their attempt to delegitimize Israel internationally, but actually come to the table and negotiate a real peace – then that is possible,” he said.Netanyahu said that Iran was also a major focus of the talks, not only its drive for a nuclear weapon, but also its “campaign of aggression across the entire Middle East”; its sponsorship of terrorism around the world; its cyber attacks against the West, Israel and Saudi Arabia; and its massive buildup of conventional arms. These points are also ones Netanyahu is currently stressing in his private meetings.Netanyahu referred to the report over the weekend of the arrest of a suspected Hezbollah terrorist in Cyprus, saying “the news of a Hezbollah plot in Cyprus is yet another wake-up call. There is no Hezbollah without Iran.”“This is what Iran is doing today without nuclear weapons,” Netanyahu said, warning that the threat will grow enormously if it has a clear path to a bomb.Netanyahu told Steinmeier, whose country is one of the six world powers negotiating a comprehensive nuclear deal that has a June 30 deadline, “We think there’s a need to hold out for a better deal, to use biting sanctions that have proved effective only three years ago.”“Remember,” Netanyahu said, “that Iran said two or three days before the conclusion of the Lausanne Framework that the destruction of Israel is non-negotiable.”The prime minister said that the survival of Israel is non-negotiable, and that “no matter what deal is struck, we will not allow Iran to endanger the survival and the future of the State of Israel.”Steinmeier pointed out that the sides have not concluded the final parameters of a deal that would enable the signing of an agreement.“We must repeat the fact that we are not talking about a good or bad agreement, but only about an agreement that also takes into account Israel’s security,” he said.Netanyahu thanked German Chancellor Angela Merkel and the German representative in the FIFA soccer organization for strongly opposing the recent Palestinian move to oust Israel from the association. Israeli officials said that Germany played an important role in getting other European countries to oppose the move, and communicate that opposition to the Palestinians.Earlier in the day, Deputy Foreign Minister Tzipi Hotovely, during her meeting with Steinmeier, said that Israel hopes Germany will lead the fight inside the EU against labeling products from the settlements.“The boycott of these products affects the quality of life for all in Judea and Samaria, both Palestinians and Israelis,” she said.While Germany is considered Israel’s most important supporter inside the EU, Berlin is very critical of Israel’s settlement policies, and has generally fallen into line with Brussels’s anti-settlement policies.Also on his visit, Steinmeier met in Ramallah with the Palestinian Authority leadership, and also received an honorary doctorate from the Hebrew University of Jerusalem.