Gold leaving high diplomacy and Netanyahu's side to be with the grandchildren?

When someone like Gold suddenly leaves, it raises questions about what it is about working with the prime minister that seems to compel top people to leave his side prematurely? 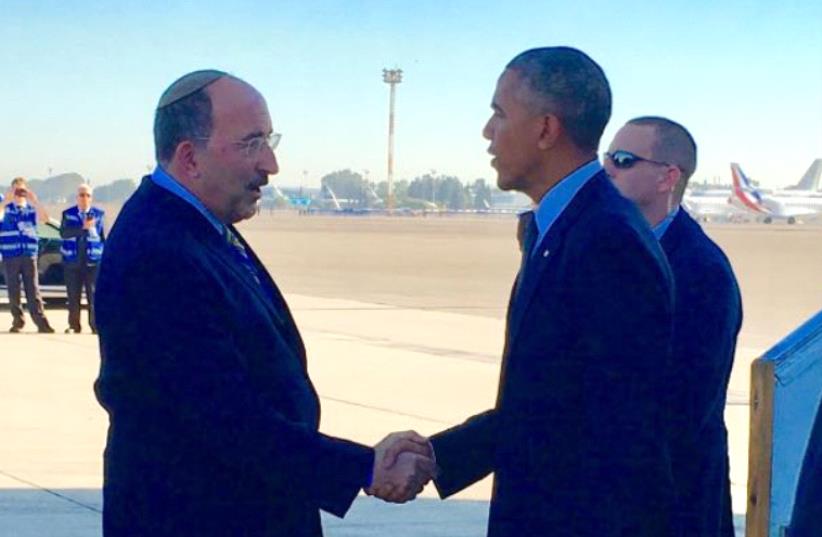 US President Barack Obama greeted by Dore Gold as he lands at Ben Gurion Airport
(photo credit: FOREIGN MINISTRY)
Advertisement
Every few months a small communique comes out of the Prime Minister’s Office announcing that one senior official or another is leaving, either for personal reasons or to go into the private sector.Last month, the Prime Minister’s Office announced that Prime Minister Benjamin Netanyahu’s Chief of Staff David Sharan, who was set to take over as cabinet secretary, had decided to go into the private sector instead.Sharan’’s announcement came only a week after Netanyahu’s top political adviser, Koby Tzoref, announced that he was leaving Netanyahu’s side in favor of a private sector position.And a month before that, the PMO issues a brief announcement saying that acting National Security Council head Yaakov Nagel had turned down an offer by Netanyahu to take over that influential post on a permanent basis because of “personal reasons.”But it was Thursday’s announcement that Dore Gold had decided to resign because of “personal reasons” that was the most unexpected of all.Unlike the others, Gold goes way back with Netanyahu. In fact, he has been at Netanyahu’s side on diplomatic matters ever since Netanyahu, then just a rising Likud star, plucked him from academia in the early 1990s and made him one of his foreign policy advisers, and later his ambassador to the UN.During the nearly 11 years that Netanyahu has been prime minister, dozens of advisers have come and gone through his office. What set Gold apart, is that with the exception of a very few select others – like Yitzhak Molcho and Ron Dermer – few lasted more than a few years.And that is what makes the Gold decision so surprising. Here he was at the pinnacle of the diplomatic pyramid, having a major influence on policy, shuttling back and forth in secret missions to Africa and in the Arab states, and one day he decides to pick up and leave it all to return to his comfortable perch as president of a think tank, the Jerusalem Center for Public Affairs.In an interview with the The Jerusalem Post, Gold denied that his leaving had anything to do with frustration with Netanyahu or his policies, or that his authority was encroached upon by Molcho, or that he was somehow kept out of the loop. On the contrary, he said, Netanyahu invited him to nearly all of the security cabinet meetings.No, the reason – he insists – is that he wanted to spend more time with his family, including two new grandchildren.Whatever the case, his leaving leaves a gaping hole in the prime minister’s foreign policy inner circle, a circle that – considering this country’s considerable foreign policy challenges – seems awfully small.With Gold gone, and Nagel on his way out, that leaves Molcho, Dermer – who has considerable influence on the prime minister even from his post in Washington – and Jonathan Schachter, from the National Security Council. That is not an overly big variety of opinions to chose from.Work in the Prime Minister’s Office is grueling. The hours are dreadful, and the demands of a demanding prime minister are great. But when someone like Gold suddenly leaves, it raises questions. What it is about working with the prime minister that seems to compel top people to leave his side prematurely?