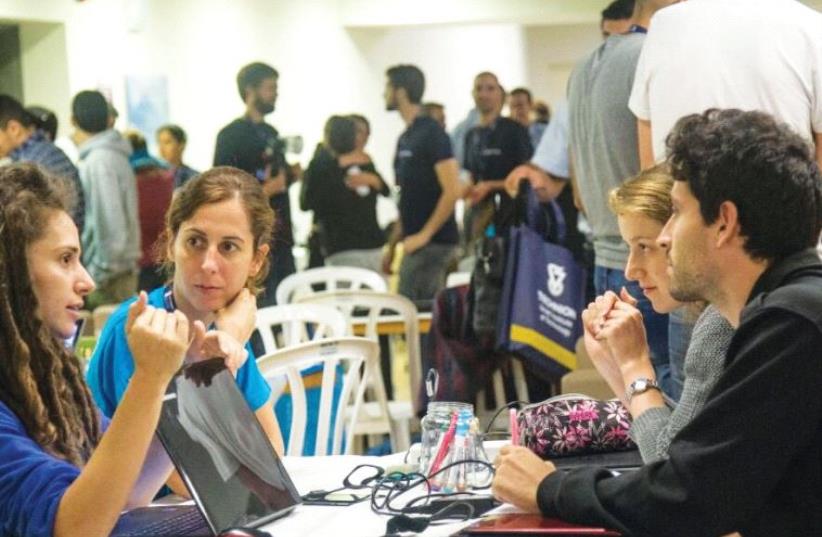 HACKATHONERS DISCUSS ‘hasbara’ ideas last week at the Technion
(photo credit: DAR COHEN)
Advertisement
Dozens of students competed to find solutions to Israel’s hasbara (public diplomacy) problems in a hackathon held at Haifa’s Technion-Israel Institute of Technology last week.The 80 participants were presented with the challenge of creating an app to dispel myths about Israel. They were posed with the question: “What will be the next strong hashtag after #bdsfail?” The 44-hour hackathon - named iHack - kicked off Wednesday evening and was held under the auspices of StandWithUs in collaboration with other organizations and companies such as Rafael Advanced Defense Systems, the Student Union and the Entrepreneurship Center of the Technion.Twenty-one of the Technion students involved completed a StandWithUs fellowship for public diplomacy leadership.
“We challenged our student Fellows to initiate a project to elevate Israel and they took the ball and ran with it”, said Michael Dickson, Executive Director of StandWithUs. “The identified some of the top young minds in Israeli tech, brought them together for an intensive 44-hour experience where they innovated amazing ideas, using tech to reach people globally about Israel”.
Yaakov Hagoel, vice chairman of the World Zionist Organization, who visited the hackathon said that while pro-Israel organizations were initially caught off guard by the birth of the Boycott Divestment and Sanction movement, from the moment the Jewish world began reacting, it began to hurt the movement.“We are all working together and I have no doubt the hackathon will bring serious results,” he stated.A team of mentors were on hand throughout the event, including 20 Rafael employees, and other experts in the fields of software and engineering, political science, marketing and graphic design. Students formed teams to develop products to tackle BDS and to help enhance Israel’s image in the media and international community.Yair Eddie Fraiman, director of public diplomacy at the Strategic Affairs and Public Diplomacy Ministry, said that he primarily came to watch. “We’re in 2016, so it could be that a student has an idea we didn’t think of. The aim of the hackathon is to think outside of the box. We understand that in our world of social networks and technology, an idea that can really help Israel could really come from this.”One team decided to create a “diplomatic Iron Dome.” Ezra (last name withheld), a team member from Rafael, brought his experience of working with military systems and applied it to the “hasbara problem.” The team envisioned anti-Israel expression as the missile, and their app as the Iron Dome that must intercept it. “Instead of a missile, it could be a blog, or negative articles or a speech, and our Iron Dome will comprise of a network of individuals and organizations who can respond,” he told the Post.“We would have pro-Israel activists around the world who are witness to these anti-Israel events and they would report them into the system. That would get fed into a war room with a big plasma TV and a map of world, so we can see where the threats come from, and whether they are serious enough to require an ambassador to respond. A negative Tweet then can be answered on social media, or by a professor that students can reply to. The people who respond are our interceptors.”Another team attempted to enhance tourists’ experiences of Israel via an image-improving version of services such as Airbnb and CouchSurfing.Dima Glinets, an engineering student from the Technion, said the app would create the best possible image of Israel. It would match Israelis with visitors to the country, based on mutual interests such as hiking or other activities. The Israeli would not only host the matching tourist, but would also show them around the country. “We believe the best hasbara tool is to share beautiful moments,” Glinets said.The winning apps will be put to use in StandWithUs's cyber center.