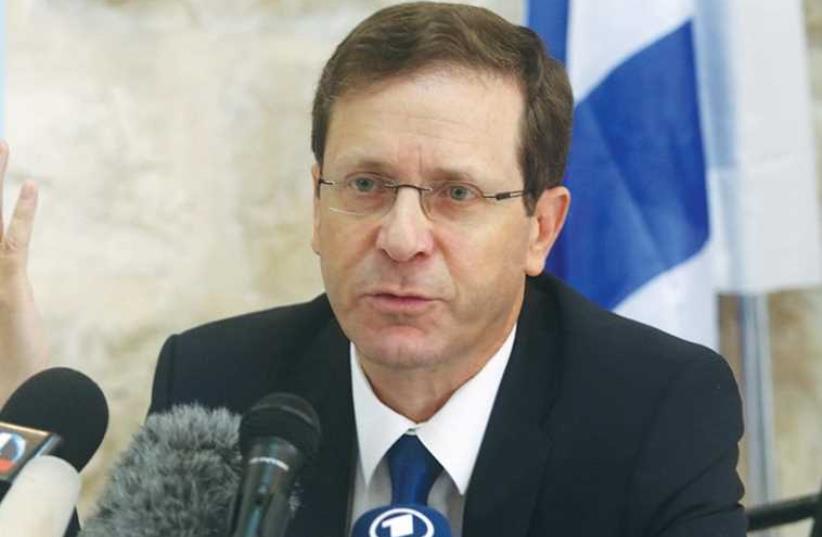 Zionist Union head Isaac Herzog speaks to the press
(photo credit: MARC ISRAEL SELLEM)
Advertisement
Prime Minister Benjamin Netanyahu will not provide US President Donald Trump what he needs to bring the Palestinians back to the negotiating table, opposition leader Isaac Herzog said at the Herzliya Conference on Thursday.Herzog recalled his negotiations with Netanyahu in the spring of 2016 on forming a national unity government. Herzog met with leaders and foreign ministers of Egypt, Jordan, Germany, Britain and the US to advance a diplomatic process that would have been the basis for the government, but Netanyahu chose instead to form a coalition with Yisrael Beytenu.“He isn’t ready for an act of Rabin, Sharon or Olmert,” Herzog said. “He has no passion for it. He just doesn’t want to be blamed by the US.”Herzog said he believes Netanyahu is actively trying to stall the Trump administration’s peace efforts and acted accordingly in his meeting in Jerusalem on Wednesday with Trump advisers Jared Kushner and Jason Greenblatt.Herzog vowed that if following the July 4 Labor Party leadership primary, Netanyahu invites him to renew negotiations on joining his government, he would not accept.“I will not come, because the Likud won’t let it happen,” Herzog said. “There will be no chance [for a unity government], and that is the tragedy. Netanyahu prefers his personal [political] survival over what the majority of the public wants. It’s not possible with him, and that’s why he has to be replaced.”Herzog mocked a Likud advertisement from the 2015 election campaign which suggested that if he won the vote, ISIS would come to Jerusalem. He said he met with the family of murdered border policewoman Hadas Malka on Wednesday, and alleged she was killed by terrorists connected to ISIS.Also at the annual policy conference in Herzliya, Yesh Atid chairman Yair Lapid criticized Netanyahu for having no diplomatic plan and accused him of being corrupt. He said Netanyahu was under an “unending criminal probe” and Interior Minister Arye Deri was convicted of bribery for crimes he committed in the ministry but now has returned to it.“I have met more convicts in my five years in politics than in my entire life before that,” Lapid said.Lapid apologized for saying during the 2015 election that Deri needed to be rehabilitated. He said it was wrong to embarrass him on live TV.Responding to allegations that Yesh Atid was silent or its views ambiguous on key issues, Lapid said the party’s views were clear but some were not noticing, because its leadership makes a point of neither shouting nor insulting anyone.Former prime minister Ehud Barak also sharply criticized Netanyahu at the conference, accusing him of corruption, giving into to the far Right, and leading Israel to international isolation. He said that under Netanyahu Israel would continue building in isolated settlements and would never permit a Palestinian state.“For his personal struggle for survival, he is willing to uproot the foundations of democracy and drag Israel into a dangerous ethical nadir,” Barak said. “In the past, Israel had prime ministers who were willing to endanger their job in order to safeguard the state,” he said. “Netanyahu is willing to endanger the state in order to safeguard his job.”